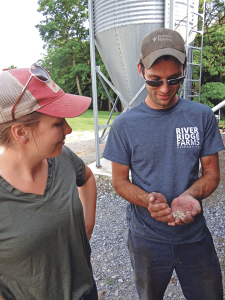 “My husband and I are both full-time farmers on separate operations,” Leslie (Hamilton) Stein of Piffard, NY, said.

Married just over a year ago to Dan, Leslie works on her family’s farm, Triple H Farms in Geneseo, NY, while Dan works on his family’s farm, Stein Farms in Caledonia. Together on their own farm, River Ridge Angus, the couple works like a tag team.

“Before we got married, I had purchased a few head of beef cattle and pigs with a cousin,” explained Leslie. “I was an animal science major in college and had always loved cattle.”

When Dan and Leslie purchased their own farm in 2017, they bought out the cousin’s livestock share and moved the entire operation to their new home. Although buildings were in place, retrofitting the barns and installing appropriate cattle fencing was a priority.

“Both barns were here when we moved here,” said Leslie. “They were pretty much like horse barns – and they had some really terrible fencing.”

Pastures that are now healthy were badly in need of grooming and reseeding. “We mowed it a lot and tried to make it pretty because we took wedding pictures out here last year,” Leslie laughed, “and so it worked out well.”

A finishing lot holds a variety of cattle that are being prepped for market.

“This is our fat lot, basically,” said Leslie. “They’re our fat cows, so they’re getting corn and they’re going to be beef.” This group consists mostly of steers with an odd heifer thrown in. “Any of our bull calves we usually steer, and then they go with heifers we don’t like the looks of or we don’t want to use to breed.”

Heifers that will be bred next year are kept in with the cow/calf pairs. This keeps them from getting over-fat, which can impede conception.

“We have mama cows out here with their calves. The girls calve out here and they eat down the pasture and they’re supplemented with hay,” Leslie explained.

Although there are no bulls on the farm at this time, bulls have been leased in the past. “We leased a bull last year and the year before, and that worked out really well,” reported Leslie.

A few Red Angus are mixed in with the blacks. “We have continued to grow the operation through internal heard growth,” remarked Leslie.

Initial marketing avenues came from networking opportunities through friends. Dan was directed by a friend after he mentioned that he was looking for market leads. This led them to a prospective restaurant. Leslie recalled how the wife of their pig supplier advised them to contact a restaurant she had dealt with previously. 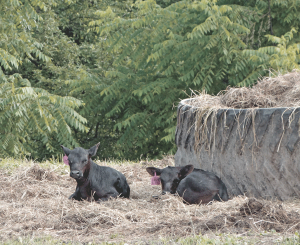 “Danny emailed them and for the last two-and-a-half years we’ve been selling them pigs,” Leslie said.

In another instance, Leslie was going to dinner one night and had the foresight to look up the establishment online before visiting them. “I was there for dinner with my aunt, and I had looked at their website right before we went. It said ‘local/seasonal.’ So I thought ‘I should just give them my card.’” She ended up talking to the owners and landed that client as well.

“We’ve done that since January – almost a year now,” Leslie reported. “They’ve been great! Now they want sweet corn – and they’re really open to anything local. They’re super excited to try anything like that. Just ask – that’s my advice. You never know. Contact people and after a while you can feel what kind of business is going to work with you and what kind isn’t.”

Leslie and Dan say that restaurants are great to work with because they know what they want, when they want it and what size animal they want. “And they give us like a month’s heads up,” said Dan.

In addition to beef, the couple has been raising pigs for four years. As they have sometimes seen piglets develop hernias, Leslie and Dan discussed caring for those pigs, emphasizing that daily care should include the close examination and observation critical to assure that the hernia does not strangulate.

“They won’t be able to grow to full size,” cautioned Dan. “I would use them for roaster pigs or something like that.”

The couple say their entire herd of pigs are already sold for future delivery. Dan pointed at the newest piglet residents and said, “Even these little guys have a home.”

Their pigs come from a private breeder. “His pigs are always great and we never have a problem with them. They always meet our specific standards,” said Leslie.

“We’ve been getting them exclusively from him for about two years,” Dan reported.

The couple sell pigs to two restaurants in Rochester, with each restaurant taking a pig every two or three months, depending on normal seasonal demand. “The restaurants plan it out 12 months in advance,” Dan remarked.

Due to an increased demand, the couple have increased the number of pigs they finish each year.

“We sell freezer beef and pork to people privately,” explained Leslie. “We do some retail cuts at two different stores in Geneseo and a place in Caledonia called Angry Rooster.”

Processing has been a bit of a learning experience.

“There’s crazy regulations depending on what your end product is,” admitted Leslie. “If it’s just for you to put in your freezer, we take them to a place in Batavia. If they don’t need to be USDA stamped they go there.” She explained that meat must be “USDA killed and packaged” for retail cuts. 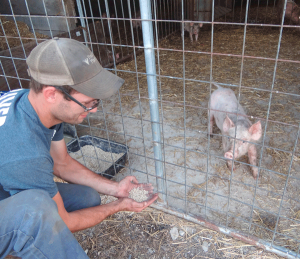 “Restaurants only need to be USDA killed, because they’re processing the animal, so we take it killed, with the USDA stamp on it, and then they cut it up and butcher it however they want. That works out for them and it works out for us,” she noted.

Leslie said it’s a different butcher for every end product because there are no butchers nearby that handle all demands.

“Ideally, there would be one processor in Avon that would do everything,” commented Dan, “but there’s so many different regulations that it is hard to get it done in just one place.”

Although those facilities are available, they are all many miles away and the extra costs must be added to the original price, limiting the feasibility of utilizing those facilities.

“They’re an hour-plus away,” said Dan. “That’s the hard part, because then you have to build that into your price, including the fuel to haul the animals. So, we use the closest place – as close as we can – that does good production, like freezer stuff, to keep the price a little bit lower. That way it’s better for the customer.”

Leslie and Dan have both been active in New York Farm Bureau’s Young Farmer and Rancher program and say that meeting people and making contacts through mutual friends and networking has promoted their business.

“The agricultural industry is so small that you meet everyone through contacts,” Leslie said. “My advice is to get involved. That’s how you make contacts. And those boards and committees are the ones who end up making decisions that are going to affect you ultimately.”