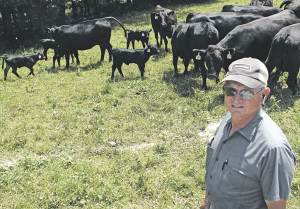 GALAX, VA – “I want my heifer calves to be my premium product and my steers to be my commodity product,” said Gale Rippey.

Rippey operates a commercial Balancer operation with a strong emphasis on genetics and a robust health program. The American Gelbvieh Association named him the 2018 Commercial Producer of the Year.

Thanks to the efforts Rippey has poured into his breeding program over the years, his heifers are sought after by commercial cattlemen as replacements for their herds. He sells first-calf pairs, bred heifers and open heifers, with a large number of them selling at the Mountain Momma Sale at the BCIA test site in Wytheville the first Saturday of every November.

His steers rate at what would be premium for many herds, with steer calves weaning mid-June at 700 pounds without creep feeding, reaching 800 – 875 pounds by 11 months. (His herd is mainly fall-calving.)

Despite the high quality of his herd, Rippey is not tempted to become a registered producer. “I’m not trying to compete with seedstock producers,” he said. “I need to get their seedstock, so I need them to survive.” His niche is providing high quality replacement females to commercial producers.

Thirty-five years ago, Rippey got his first Gelbvieh bull. He and his father were running a commercial operation.

“We bought that Gelbvieh bull for growth and performance,” Rippey recalled, “and then found out they provided all that plus they make super momma cows. We kept our Balancer females. We were impressed with the cows they became.”

Every year they replaced about a quarter of their cow herd. Once the females became all half-Gelbvieh, they bought a Balancer bull so they could keep the herd all Balancer. He continues to improve his cow herd with replacements.

Rippey’s herd numbers about 400 cows. He would like eventually to get to 500. Heifers are bred via AI. Other breeding is done with a Balancer bull. His farm is spread over mainly rented property in Grayson and Carroll counties. He also runs stocker cattle, and is growing ET embryos for Little Windy Hill Farms of Max Meadows, VA.

“Gelbviehs are prized for their muscle and milk,” Rippey said. “They’re efficient, productive cattle and breed easily. They’re very fertile. They also put feed into production too – not backfat.”

The health program at Gale Rippey Farms includes an extensive vaccine program and other preventative measures like pelvic measurements. Rippey works closely with his veterinarians.

Because Rippey operates in the mountains of southwest Virginia, where storage space is a premium, he had to be creative when it came to the grass and wheat baleage he makes. He prefers individual bales to tube-wrapped bales because the rare areas of flat land are some of the most productive. Because he wraps individual bales, he doesn’t have to move them the same day – which means he can actually make more baleage on any one day. Plus, he can feed bales when he wants to, not just because a tube is open. Even though the cost of plastic in making individual bales is higher than making tube baleage, overall it is more cost-effective for Rippey to make individual bales.

Rippey is looking for an intern interested in his high-end, finely detailed commercial cattle operation. “I’d really like to find someone to some to pass it down to, someone to come and learn for some years and then take over,” he said.

Those looking for open fall heifers, bred spring heifers or first-calf heifer pairs should head to the Mountain Momma Heifer and Cow/Calf Sale in Wytheville on Saturday, Nov. 7.