Richlands betting big on its creamery 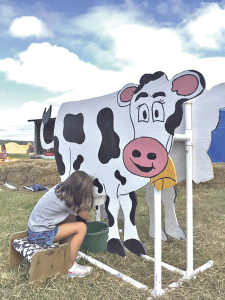 By American standards, Virginia is pretty old. Its nickname, the Old Dominion State, was earned by the loyalty Virginia showed to the Royalist cause during the English Civil War. Virginia has a lot of history in it, some of which goes back to before the signing of the Declaration of Independence. That history includes Richlands Farm.

Known as the Jones Farm, and owned and operated by the Jones family for over 200 years, it has been a fixture of central Virginia since before the American Revolution.

“My family has been farming here in Blackstone, Virginia, since the mid-1700s,” said Coley Jones Drinkwater. “For six generations, we grew tobacco, like everyone else here. Then, for the past three generations, we’ve been dairy farmers.”

That change came about due to World War II. “My grandfather, Roy Jones, was called home to the farm by his parents. His two older brothers were in the military, and his parents knew that if he were home on the farm, he would be exempt from military service, due to farm conscription deferments. This didn’t sit well with my grandfather. He went off and enlisted in the Navy. His parents were very upset – they didn’t speak to him for quite a while. As a result, he went off to find work elsewhere.”

This eventually led to Roy working at a general store in Richlands, VA, after his honorable discharge and his studies of agronomy at Virginia Tech. Roy had a realization when his boss told him that he spent more time with Roy, whom he was grooming to replace him, than he did with his own son. Roy realized that he didn’t want to work that way and be separated from his family. Roy and his wife Shirley went back to the family farm.

But Roy never forgot his time in Richlands, and so he renamed the family farm after the place where he had learned so much. Under Roy’s stewardship, the farm became a dairy operation. His initiatives transformed the small family operation into one that today farms over 800 acres with a herd of 500 cows.

Coley, formerly the farm’s head herdswoman, now heads up Richlands’ new creamery. T.R. took up his father’s role as head of all things mechanical, planting and harvesting, which is very important to the dairy, as the herd feeds mostly on corn silage. Brittany is the herd manager. 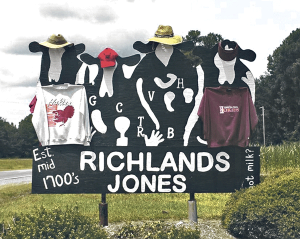 The herd consists of mostly Holsteins. Coley said, “But now, for the creamery, we’ve got more crossbreeds. Some Brown Swiss, some Jerseys and some Swedish Reds.”

Today, the farm is actively engaging in agritourism. “We have a pumpkin patch and corn maze for our guests to enjoy,” Coley explained. “There are family farm days, guided tours, a petting zoo, hay rides, our ‘milk-a-cow’ activity and our cow kitchen,” which allows guests to see just what it is the cows are fed. It drives home the point that their cows are not force fed grains, but are mostly sustained on forage.

The next step in the evolution of Richlands is the creamery.

According to Coley, “It’s a $2 million expansion project. The creamery is in a 1,200-square foot facility. It’s outfitted with a homogenizer, pasteurizer, cream separator and bottling machine. The creamery will offer whole, creamline, chocolate and 2% milk, along with 24 flavors of ice cream. It’ll all be available at our on-site retail store, Richlands Creamery. We’ll also be sending our fluid milk to local stores, groceries and coffee shops.” The creamery will feature a commercial kitchen offering both lunch and dinner to its hungry patrons as well. The creamery is set to open its doors at the end of the month.

Always with an eye toward being a responsible member of the community, Richlands is committed to helping local people in need. “For every 10 gallons of milk sold at Richlands,” said Coley, “we’ll donate a gallon of milk to Feedmore Food Bank. Milk is one of the most needed staples at food banks, and we’re glad to be able to do our part.”