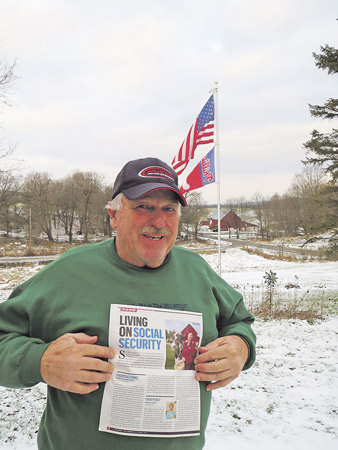 HUBBARDSVILLE, NY — If you look at DeWitt Head’s body of work, you’ll find a hard-fought, life-long career as a dairy farmer along with his wife of 54 years, Diane, and recognition as the 2013 New York Holstein’s Retired Master Breeders for their work creating generations of excellent prize-winning “Headline” Holstein genetics. Recently, the dairy statesman found himself a new gig: Farmer model.

In the 2018 November issue of the AARP bulletin, which reaches 38 million members, you’ll find the debonair dairyman at the halter with one of his son’s prized Holstein cows. “The cow and DeWitt stole the hearts of the magazine,” said Tracy Schorn, Editor for State News with the AARP Bulletin. “Farmers Rock AARP” said the former Northeast Editor of the Lancaster Farming newspaper.

The Heads were featured in a “Living on Social Security” special report that chronicled retiree’s perspectives with the program. A fifth-generation farmer, DeWitt and his wife still live on a slice of the original 900 acres first purchased by DeWitt’s great-grandfather in 1904.

According to Schorn’s account, “At age 60, DeWitt developed heart disease, by which point he was milking a hundred cows, three times a day, every day. Dairy farmers don’t take holidays and weekends.”

He had to sell his herd, and pass the operation on to his son, Tim. “I started taking Social Security at 62, because I was told I would die. But I proved them wrong,” said DeWitt.

The Heads receive a combined Social Security payment of around $1,000 a month. “We’re farmers. We never made a lot of money.” But the income “keeps us going,” said DeWitt. “Most of my friends get more, but they waited longer.”

After his heart trouble, and his quasi-retirement from dairy farming (“I help out my son, and my daughter who has a farm up near Rochester”), DeWitt has worked at a golf course, drove a school bus, volunteered at the Brookfield Fair and is presently a Town Councilman for the Town of Brookfield.

From the AARP bulletin: “But at 72, he said his wife Diane made him retire. ‘She said it’s time to slow down.’ The dairy business has always been volatile, ‘but I’m glad I lived when I did,’ when milk prices were high in the 1970s and 80s. He’s not optimistic about the future of family dairy farms like his, having seen a lot of farms go under in recent years.”

DeWitt said he’s thankful for what he put into Social Security and hopes the safety net is there for the next generation. “The politicians shouldn’t touch it. It scares me to think it won’t be here for the younger crowd.”

“Being in the nationwide paper has been fun and we have enjoyed many comments that respect us for carrying on with dairy farming,” said Diane. “We even got a note from a 94-year old long lost relative who lives in the Midwest. The bulletin will be part of Dewitt’s Hall of Fame in his ‘man-cave’. We’ll try and keep his new found model status in check.”