Rethinking deworming of beef cattle – The growing issue of resistance 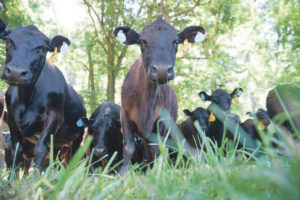 Cattlemen have benefited from the development of anthelmintic products that keep stomach and intestinal worms at bay. But the easy availability and relatively low cost of products has led to cattle being dewormed without any parameters other than “we deworm calves at weaning” or “cows are treated when they go to pasture, and get an extra dose if the weather is damp.”

While resistance has become an increasingly severe problem for those raising sheep and goats, beeves didn’t seem to develop resistance. Many in the cattle industry thought it wouldn’t happen. “That ignored the realities of biology,” said Dr. Ray Kaplan, parasitologist and professor at the University of Georgia College of Veterinary Medicine. “Parasitologists knew resistance would become a problem in cattle, and eventually it did. The first case in the U.S. was reported in 2004. Since around 2007, resistance has been recognized as a serious problem worldwide and has continued to get worse since then.”

A 2006 study in New Zealand showed that cattle worms on three-quarters of farms showed resistance to both the macrocyclic lactones (MLs) and the white wormers (Safe-Guard, Panacur, Valbazen® and Synanthic®). Most resistance was seen in the intestinal worm Cooperia, the most common worm in young cattle. Cooperia will cause production losses but usually not serious disease.

Australia’s problem is similar to the U.S. situation. “On about 20% of farms, there was resistance in Ostertagia to all three groups of drugs,” said Kaplan. “This is what we can expect to see in the U.S. in the near term.” Kaplan added that it isn’t known how common resistance is in the U.S. because there haven’t been any large, national studies, but work done by his lab suggests the resistance problem is much worse than currently recognized.

“The issue of resistance in Ostertagia in the U.S. is on the rise,” said Kaplan. “Part of the lifecycle of Ostertagia is that the larvae, after they’re ingested, burrow into the wall of the stomach and go into an inhibited state of development. In the past, the ML drugs were very effective against this stage – they’re the only drug that works well against that stage.”

Every cow on pasture is infected with intestinal stomach worms, but infection is not the same as disease. Every grazing animal evolved in the presence of internal parasites and has also evolved mechanisms to cope with them. “The problem is when there are too many worms,” Kaplan said. “It’s been shown that even low to moderate levels of worms can cause a level of production loss, even if parasites aren’t impacting health. But if the worms are resistant to drugs, you’re paying for the drug and not getting the benefit you’re expecting from treatment.”

What drives drug resistance? “We’re putting selection pressure on a worm population with a drug that’s killing most of them,” Kaplan said. “Any worms that have the genetic ability to survive the treatment will then have a reproductive advantage. That’s basic evolution in action. How we use these drugs will determine how rapidly resistance develops. We can reduce that rate significantly by changing the way we use drugs.”

Many producers use generic anthelmintics to save money. Kaplan said theoretically, generic products should be just as effective as name brand products, but there’s evidence they’re sometimes not. “Generics are so inexpensive that people are using them irresponsibly,” he said. “Using them at reduced doses for ectoparasite control drives resistance even more.”

For cattlemen who haven’t seen resistance a problem, Kaplan said the main reason is that so far, most resistance occurs in species that don’t cause serious disease. “Cooperia doesn’t cause a lot of disease, and Haemonchus isn’t usually present in high numbers unless you’re in Florida or Texas,” said Kaplan. “When you have resistance to these species, you see reduced weight gain, not clinical disease. Because the genetics of cattle have continued to improve, if you’re losing ground to worms because drugs aren’t working as well, you aren’t going to notice it unless you’re keeping very close records of weight gains over time.”

Those who have a serious parasite problem on the farm most likely have a management problem that isn’t easily solved with drugs. “In the past, dewormers may have solved a parasite problem, but not anymore,” he said. “If you try to solve the problem with dewormers, it’s going to be very short-lived solution and not sustainable – it’ll cause more problems in the long term with more drug resistance.”

The question regarding how to deal with resistance in parasite management becomes “Why do we keep doing things the same way?” Kaplan said the answer, for now, is working more in harmony with nature rather than thinking every issue can be solved with a drug. Dewormers will be an important aspect of parasite management, but not the sole solution. “We have to be smarter,” he said. “Deworm less and deworm smarter. Otherwise healthy cattle with low worm burdens don’t need deworming to stay healthy.”