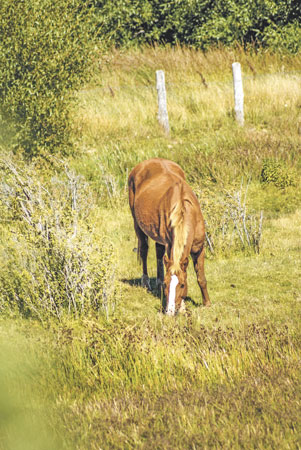 The recurrent heavy rains that have inundated the East Coast and the Mid-Atlantic area in particular have brought yet another unwanted gift with them.

The Chincoteague ponies have been one of the first and northernmost recipients of this gift, and it was announced in The Washington Post that a pony in the herd was put down recently from a disease commonly called “swamp cancer” – and that seven other ponies have contracted this disease.

According to members of the Chincoteague Fire Company that oversees the ponies, “the fungus looks exactly like sesame seeds [and it] bunches up like grapes and then [spreads] to other areas.”

The proper name for swamp cancer is pythiosis and it can affect humans, equines, dogs and cats. Pythiosis (Pythium indiosum) is referred to as an aquatic fungi or water mold, but it is phylogenetically distinct. It is more commonly seen in Florida, Georgia, Louisiana, Mississippi and Alabama, where an abundance of water and warmer temperatures give it a viable atmosphere, but the incidence of this disease is moving up throughout the eastern coastal areas fueled by the heavy rains and the warm temperatures of the summer of 2018.

According to Bob Glass, an allergy specialist whose company, Pan American Veterinary Labs, has been investigating pythiosis for years, “we may even see this disease moving farther northwards, depending on the rainfall and temperatures.”

Glass added, “We know that pythiosis parasitizes plants, fish, algae and crustaceans. These organisms produce spores that move through the water looking for new plants to invade and when horses are in that wet environment they are at risk of becoming infected.”

Pythium species cannot replicate outside of a plant environment, however. “There is no animal-to-animal transmission of pythiosis and the infected horse cannot contaminate the environment,” Glass said in an article from DVM360.com printed in March 2011. It also read “The danger to horses comes from the accidental touching of an open wound on the horse to a plant that is carrying the spores. This produces devastating tumor-like nodular skin masses on the animal. The extremely rapid rate of growth of these lesions and the generally fatal outcome in the cases makes remembering this disease crucial for equine practitioners, since early recognition and appropriate treatment are the only hope for the survival of the infected horse.”

Glass said, “The best outcomes are a combination of treatment involving the surgical removal of the lesions followed by flushing the area with specific antibiotics, but the early recognition of the problem and the treatment of this affected tissue is the most important factor.”

Another crucial factor is hands-on inspection of the animals themselves. Glass stated that, while in Brazil during an outbreak of this disease, one large ranch there had no incidence of it because their cowboys carefully inspected every horse every morning.

Glass went on to say, “Of course, in wild horse herds this is an impossibility,” but said that early recognition of this problem was key to a happy outcome for horses’ owners who find the tell-tale signs on their horses.