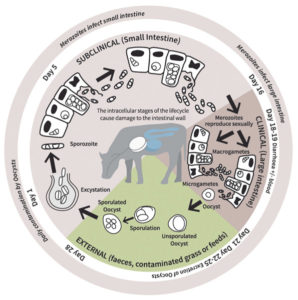 Bovine coccidiosis is common in dairy cattle, especially in weaned calves. Characterized by diarrhea, the parasitic disease exists on every dairy farm to some extent. How quickly it’s identified and how it’s managed are key to controlling its spread and potential mortality rates.

“There are about 13 different coccidiosis species,” said Jerry Mechor, DVM, a technical consultant with Elanco. “I don’t think you can go onto a dairy farm and not see it. The literature will tell you it is globally prevalent in cattle.”

The intestinal disease can be present in cattle of all ages but is typically more problematic in calves between three weeks and six months old. It is contracted when the calf ingests oocysts present in feces from another animal. Inside the calf, the oocysts release sporozoites that travel to the intestine where they multiply rapidly. It takes between 16 and 21 days before the infected calf starts to shed oocysts, and in that time, the resulting multiplication inside the gastrointestinal tract can lead to the shedding of millions of infective oocysts.

Although common, the parasite and how it impacts a dairy calf is commonly misunderstood. Often, every case of diarrhea in weaned calves is considered coccidiosis, and that’s just not so, according to Mechor. Diarrhea is a common symptom but not the sole determining factor of the disease.

“The researchers talk about ‘3 Ds’ – diarrhea, dysentery and death – because that is the triad we would see,” he said. “There are opportunities for treatment and a couple of therapeutics that we would use with these calves to provide some relief. Depending on the severity of dehydration, electrolytes may be indicated and veterinarian-prescribed antibiotics are often used to treat an infected calf.”

Diagnosis begins with a physical exam and fecal samples to determine if diarrhea is caused by coccidiosis or another pathogen. Mechor recommends taking samples of five to eight calves out of groups of 20 and submitting for testing. He suggests including animals with and without diarrhea. The fecal samples are examined to determine if highly pathogenic species are present and ideally a count of the parasite on an oocyst-per-gram basis.

“Not all 13 species are pathogenic – only two are – so we need to know which species are there,” he said. “I also think post-mortems are something we don’t do enough of in the industry and those would give us a better idea what contributes to morbidity and mortality in calves.”

Coccidiosis survives outside the animal and can withstand extreme cold and dry conditions. Mechor said it can survive a long time in the soil and surfaces when it’s shielded from sun and in moist conditions. For that reason, focusing on sanitation in housing facilities like calf hutches and pens is critical to controlling its spread.

“Like other pathogens, cows start to shed more oocytes at the time of freshening so minimizing exposure to infective oocysts in the environment is important,” he said. “Effective cleaning of calf housing is important. Between calving, calf hutches or other calf housing should be thoroughly cleaned with a pressure sprayer and brushes. Steam cleaning works well but you can also disinfect with bleach.”

Minimizing exposure to coccidiosis in calves is key to reducing the impact on a herd. Young calves start to shed as early as 21 to 35 days of age. Minimizing exposure to the parasite with an emphasis on environmental hygiene and use of product for control and prevention will reduce any chance of disease before weaning. Mechor recommends following these steps to support strong immune health:

“It is hard to establish how the subclinical effects of disease impacts growth and efficiency of the calves and heifers that are important to dairymen,” he said.

On farms that have used Rumensin for coccidiosis prevention and control, Mechor said there has been a profound impact in decreasing mortality rates. In feedlot studies, mortality rates among calves significantly dropped in the period following widespread adoption.