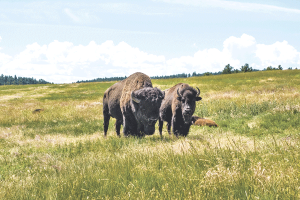 Raising bison may sound like an easy way to raise meat animals, as bison don’t require shelter, even in northern climates; however, Martha McFarland, in a recent Practical Farmers of Iowa presentation, said that anyone interested in raising bison needs to fully understand the animals first.

She said that while she doesn’t consider herself a bison expert, she has been raising bison nine years and is a member of the Minnesota Bison Association (she hasn’t found an association in her state). Her Iowa farm, Hawkeye Buffalo, includes 50 bison, plus a few Hereford beef cattle that she raises with her father, Dan. The duo sells bison meat and live animals, plus opens the farm for agritourism.

The farm is a mix of 130 acres of woods, pasture and open grasses, plus 60 acres of cropland they rent out and 40 acres of hay.

McFarland said the biggest mistake people make about bison is thinking that since they graze and are raised for meat, they are just like cattle.

“The very most important thing to know if you should raise bison is that bison are not cattle,” McFarland said. Cattle and bison can interbreed to produce beefalo, but these offspring are often sterile.

One of the biggest differences is in the animals’ personalities. “I love my Herefords and they need me; the bison, on the other hand, takes care of itself,” McFarland said.

Bison need no barns, for example, and are very tolerant of weather conditions. Even though she makes water available to them all year, “they often eat snow as often as they come up for water,” McFarland said. They’re hearty enough that their weight gain is the same year-round.

“They’ll face into the wind and walk into a storm,” McFarland said. “They have efficiency with feed. An old-timer said that you can give them any old hay and they still gain weight. They eat 3% of their body weight per day in feed.”

McFarland has one bison cow who has calved every year and is about 15 years old. Bison live as long as 28 years.

Bison take longer to get to market. Operators should anticipate two to 2.5 years before a bison is large enough. Because of their larger size and the relative rarity of bison, they command a much higher carcass price compared with beef.

“There are over 40 million cattle in the U.S. and less than a million bison,” McFarland said. “There is an untapped market that producers like myself cannot keep up with. There’s no need for competition. It’s a friendly industry.”

She said bison tours have contributed to her sales. Consumers have shifted from thinking of bison as a novelty meat to a type of meat they enjoy. The farm sells directly to customers who pick up meat from the farm, both in individual cuts and wholesale portions.

She said that although 2019 proved to be a down year for the bison industry, the health benefits of bison are driving demand, along with the consumer trend of buying locally raised food, as most bison producers are smaller operations.

She said bison is high in protein with fewer calories than beef – 145 calories per four ounces, compared with 375, and with far less fat. They sell bison for $10 a pound and are currently sold out.

While the vigor of the animals and prices for the meat sound enticing, she warned would-be growers that they may need to adjust their prejudices of the animals – as well as the height of their fences.

“The good news in raising bison is when I tried to find the crazy videos or pictures, I didn’t have many,” she said. “They can live in a smaller, enclosed space and jump higher than a 12-foot fence. When they are out and have elbow room, they’re pretty laid back. Every operation is going to be different.”

Farmers also need to realize they’ll have to wait until a bison heifer is three to have a calf, not two, like cattle. They also cannot mix sheep or goats with bison, as they are carriers for malignant catarrhal fever (MCF). MCF can wipe out entire bison herds.

“The most important thing is parasite treatments,” McFarland said. “There are strategies like a safeguard lick block, but I feel it’s not consistent enough if you’re having trouble with parasites. Thousands of years ago, an animal would come through this area and would not come through again for years. We don’t have that kind of space to break the parasite cycle.”

She also warned hobby farmers to avoid buying just one bison. “They’re very herd-oriented,” she said. “If you have just one, I don’t feel it would thrive. There’s a hierarchy within the herd. A bison will tear through a fence if they’re trying to get to the rest of the herd.”

She harvests bison from the field. While she maintains that they’re not aggressive animals by nature, the constraints of a chute and cattle truck would stress them too much. “You don’t want to get down in the middle of the herd,” she said. They may push against each other and hurt the farmer in that case.

“When working with them, we stay outside the herd and stay back as far as we can from the animals because of how quickly they move,” McFarland said. “I definitely don’t want to get into the middle of the herd. It’s worth noting that I can move them on foot by myself. They’re not super aggressive. Each herd is different and I’m very comfortable with my herd. Since they know me, it’s almost easier to work the herd by myself than if I brought in 10 people.”

“A bison in the wild wants to turn and run away,” McFarland said. “They could be aggressive, but that typically happens in a time or place where they’re trapped and the threat isn’t going away.”

For any vet care on her bison, she uses a handling facility with a crash gate that swings forward around the head gate. She stressed that it’s because bison are fast, not that they’re aggressive. “Think about a bison like a deer,” she said. “Bison are amazing intuitive creatures. They’re awesome. You think you have them all figured out and then they surprise you.