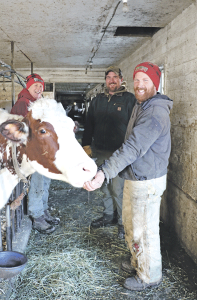 In January, Jacob Hamilton of Hamilton Farm will celebrate four years of holding the reins of the family farm. “I got my first milk check in January 2016,” said the native son of Brattleboro, VT.

He took over for his father, Kevin Hamilton, who is fourth generation, and also a Brattleboro native. “I went in with my father in 1976. We had about 40 cows then. We haven’t increased a lot,” said Kevin. His father turned the reins over to his son when he turned 62.

The farm’s current dairy herd is 51 cows, all registered Holsteins, which includes 40 milking cows that produce 60 pounds of milk per cow. The milk is picked up by Agrimark.

Hamilton Farm has been in the Hamilton family since Joseph Wright Hamilton, Kevin’s great-grandfather, purchased the land. He had grown up next door at a farm that is within walking distance of their current farm. As his brother was on the home farm, when the current land became available, he purchased it in the late 1880s. Joseph Wright Hamilton’s grandson, Joseph Eli Hamilton, was Kevin Hamilton’s father.

All the generations, including Kevin Hamilton’s grandfather, Ray Hamilton, continued on the tradition of farming at 311 Hamilton Rd. There are currently 300 total acres, with 60 acres of tillable land. They also rent land around the farm.

Each generation’s timeline shows up on the barn. “You can see the old part of the barn that was there when my great-grandfather purchased it. It was added onto in the middle by my grandfather in 1946. Then another addition was put on in 1968,” said Kevin.

How did Kevin carry the dairy farm through the 1980s, when a lot of dairy farms floundered? “At some point, I remember telling my wife, ‘We’re going to quit.’ She said, ‘You are not going quit’ – it’s her fault,” he joked. Her name is Jean Hamilton. Together, they kept the farm kept going through one of the hardest times for dairies.

“I like dealing with the cows,” said Kevin, now 66. He helps out on the farm alongside Jacob, who is further assisted by his brother Whitney.

One way that Jacob is diversifying is by making wood shavings from their woodlot, a couple hundred acres of woodland, and offering them for sale. “The biggest asset is having the shavings for our own cows,” he said, for bedding.

They have five working tractors, with a few waiting in line to be fixed, mainly Internationals, and one John Deere.

According to Jacob, they are the only local conventional dairy left in the area. “It’s the survival of the fittest. Everybody else around sold their cows around 2006,” he said.