“It came without tags. It came without packages, boxes or bags – of grass seed, that is,” said the Grinch who stole moisture from the seed-producing areas of the Pacific Northwest.

This was the warning from Everett Thomas, retired agronomist from the William H. Miner Agricultural Research Institute and president of Oak Point Agronomics Ltd. In the 2021 December Farm Report from the Miner Institute, Thomas suggested, “Get your forage seed ordered immediately.” 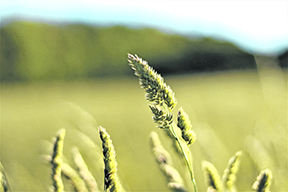 For 2022, order your grass seed early. Photo by Troy Bishopp

“Reports from the seed industry are grim, showing tight to very tight supplies of several forage seeds commonly used on Northeastern dairy farms. Species expected to be in shortest supply include meadow fescue; it’s entirely possible – perhaps likely – that if you go to your dealer in March looking for meadow fescue seed you may be out of luck,” wrote Thomas.

“Alfalfa and tall fescue are also in short supply, while timothy and orchardgrass supplies are extremely tight. Bromegrass and most clovers (alsike, red, Ladino) are also in very short supply – there’s really no place to turn. These shortages aren’t demand-driven but are the result of high heat and drought in seed producing areas in the Pacific Northwest and adjoining areas of Canada.

“It’s okay to substitute tall fescue for meadow fescue in alfalfa-grass seedings, and if you’re still using five pounds or so of grass in these seedings this would be an excellent time to drop your grass rate to two pounds per acre. You’ll save money, probably have a higher-quality crop and you’ll leave some grass seed for the next guy,” penned Thomas.

Oregon, the “Grass Seed Capital of the World,” grows 98% of all U.S. orchardgrass seed, 93% of fescue seed and 91% of ryegrass seed, according to the state’s Department of Agriculture.

According to the Oregon Seed Council, the state produces about 600 million pounds of grass seed every year, which counts for a significant portion of the world’s product. Much of the state has been under extreme or exceptional drought conditions, with extreme high temperatures this past summer. It goes without saying that many farmers saw below-average yields on several crops in 2021.

“Looking at OSU records dating back to the 1970s, no other year comes close to the precipitation deficit seen this growing season,” said Nicole Anderson, an associate professor and field crops Extension agent for Oregon State University. “This year we saw yields across the region reduced by as much as half due to low precipitation and sizzling temperatures. In this case, we could have both low seed number and low seed weight. It’s kind of a double-whammy effect here.”

Ohio-based Green Velvet Sod Farms told their customers, “Seed yields among grass seed growers have diminished due to historical spring drought in most of the major growing regions, and combined with extraordinary heat, has resulted in sizable seed yield reductions as high as 50% across all major species. The drastically reduced harvest will most certainly impact the market for the next 12 months and potentially longer.”

If you’re looking to buy forage seed to make a hay, pasture or cover crop in 2022, consult with your local seed dealer early and often to secure enough inventory for your farm.