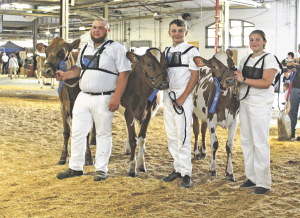 It’s clear a love of agriculture runs deeply in the Curtis Szalach family. Siblings Andrew and Erin Curtis Szalach enjoy promoting the Ayrshire breed at events like the New York State Fair and through their various memberships.

“They’ve been very involved in the Ayrshire breed for a long time,” said their mother, Diana Curtis. “At least since they’ve been five.”

In addition to their Fair wins, the youth have had an animal named champion at the World Dairy Expo in Madison, WI, and All-American animals at the All-American Dairy Show in Harrisburg, PA, as well. Andrew was named the National Youth Record Book Record Holder by the Ayrshire Association and Erin is serving as National Ayrshire Queen for 2019-20. At the Fair, she alternated between handing out ribbons as royalty and participating as a showman.

All of their involvement in agriculture is a way of life for these eighth-generation farmers. In addition to the 45 head of young stock and 25 milkers – mostly Ayrshire and a few Brown Swiss and Holstein – the family owns a small group of milkers at a neighboring farm. Diana’s parents, James and Joan Curtis, own the 30-acre corn and hay farm and Diana and her children live just down the road. Their herd averages 24,000 pounds of milk on pasture and TMR in the barn.

Like many small farm operators, Diana works off the farm with Cazenovia Central Schools. Her father, who retired as dairy professor for Morrisville College, wanted to scale back. But that doesn’t mean the family tradition of working with animals had to end.

“We’ve always had animals,” Diana said. “I’ve shown since I was small. My father and grandfather showed. My sister and her children and my brother and his children are involved. I can’t imagine not having animals. We’re very focused on cow families. They’re part of our family.”

She believes that the children learn a lot from their involvement in caring for the animals.

“It’s so important for the kids to be a part of it,” Diana said. “It teaches us compassion and hard work. I can’t think of any other life for us to have. The people we meet and the friendships we make are phenomenal. You just can’t get that in other places.

“All of the kids are dedicated, committed and they like to be in the barn and in the show ring. They also know it takes an awful lot of hard work. It’s not just about showing, but mating, feeding, cow health, cow comfort, cow nutrition.”

The family’s focus on cow comfort in their tie stall barn includes proper ventilation with several fans, bedding of shavings on mattresses and whole milk for calves instead of milk replacer.

“Their health and comfort is number one,” Diana said. 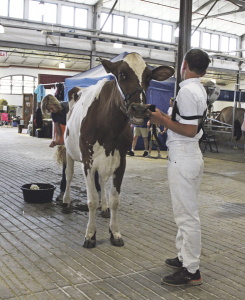 For showing, she passes along to her children the tips she’s garnered over the years. She’s also a big stickler on sportsmanship, telling her children to work hard but also to enjoy themselves.

“Watch other exhibitors who are older and ask questions,” Diana said. “This person may have a tip that will work for you. That’s how we learn. Definitely know your animal and work hard to exhibit it to the best of your ability. Make sure you take care of her.”

She said this year her children really learned to work together as a team and to make sure the animals were taken care of.

It seems to Diana that from the start, her children would follow the family tradition.

“Erin dressed up for Halloween at age 8 as the Ayrshire queen,” she said with a laugh. “She’s had good luck and worked hard.”

For a while, she wasn’t sure if Andrew would become as interested in animals. It’s easy to follow in the steps of an older sibling, but younger ones also want to find their own path at times.

“I’ve been really impressed with how Andrew did this year,” Diana said. “They both really worked hard.”