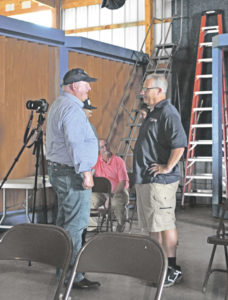 When it comes to policy making in Washington, D.C., farmers are grateful to have someone on their side. Congressman Glenn “GT” Thompson, U.S. Representative for Pennsylvania’s 15th District and Republican leader of the House Committee on Agriculture, discussed current ag issues recently at Ag Progress Days.

Thompson opened with a discussion about what he considers the number one issue for rural Americans: connectivity and the importance of rural broadband. As he reiterated the critical need for connectivity, Thompson pointed out that the need was accentuated during COVID-19 when the digital divide became clear. “Our need for strong broadband connectivity isn’t going anywhere,” he said. “We need it in the farmhouse and in the field.” Thompson praised the bipartisan work done by the Ag Committee to solve the problem.

“We started to address it in the 2018 Farm Bill,” said Thompson. “In the end, it was a strong bipartisan Farm Bill.” More recently, the issue has been addressed by the Broadband Internet Connections for Rural America Act, a bill Thompson said was supported by every member of the Ag Committee, and involved more than $42 billion in spending over eight years.

Another topic that concerns farmers are possible changes to the Waters of the United States (WOTUS) that would allow rewriting the Clean Water Act. “The Clean Water Act is one of the most righteous pieces of legislation we ever had,” said Thompson, adding that the act has cleaned up navigable waters. “Unfortunately, the Waters of the U.S. was the largest private property taking proposal we’ve ever seen, and it took away states’ sovereignty over non-navigable waters.”

Thompson said the Navigable Waters Protection Rule was put in place by former president Donald Trump and provided certainty, under WOTUS, to protect low lying areas on farms where water temporarily collected. The way the act was originally written, low-lying areas where water remained for a short time (such as mud puddles) would require landowners to obtain federal permitting to use that land.

“Unfortunately, recently the Biden Administration announced its intent to redefine WOTUS yet again,” said Thompson. “It’s a repeal of the Navigable Waters Rule that seems to be working well without controversy. I hope it isn’t revisited in the spirt of 2015, and if it is, I promise to fight it to keep that from occurring.”

Farmers had a first-hand look at how the pandemic underscored the importance of a resilient food supply chain in relation to national food security. Price volatility, especially in the beef industry, brought up age-old concerns regarding the competitive nature of packers. “There are a lot of proposed solutions,” said Thompson, “but not much widespread agreement on the details of the proposals. I’m a strong believer that any successful proposal when it comes to protein processing needs to benefit all the segments of the livestock and processor industries.”

Thompson said it’s important to capitalize on what he referred to as the administration’s arbitrary line speeds at packing plants. “American agriculture is science, technology and innovation,” he said, noting the hampering effect on efficiency and innovation if the recent court case limiting line speed for protein processing isn’t appealed. “The court case finding wasn’t based on employee wellness – there were technical issues as to how the judge made the decision. The USDA has refused to appeal this, and to me, that’s the last place they should deny science, technology and innovation.”

On a positive note, Thompson said he’s pleased to see Congress and the administration teaming up to help existing processing plants become federally inspected as well as investing in the expansion of up-and-coming processors across the nation. He noted that new and medium-sized facilities will have the boost they need to get started and find their niche to contribute to a more resilient marketplace.

In discussing the impact of trade on the dairy industry, Thompson said it’s important to maintain oversight with trade partners. “Canada has found a way around the USMCA and has agreed to eliminate the Class 7 rate and created Class 4a,” he said. “It’s a back door way of being compliant but sticking it to American dairy farmers.”

The U.S. currently lacks a Chief Agricultural Negotiator for U.S. trade, and Thompson and the Ag Committee are calling on President Joe Biden to name someone for that spot. “It’s August and the position is not filled,” said Thompson. “Especially coming out of trade agreements with USMCA and China, the agriculture industry is absolutely dependent on having a strong individual in that position.”

Thompson also broached the sensitive topic of climate. He said that for too long, Republican policymakers have not participated in climate discussions and have allowed extreme voices on the other side to receive all the attention, resulting in policies and proposals that put a negative label of “climate criminals” on the backs of American farmers and foresters.

“That couldn’t be further from the truth if you look at science, facts and data behind American agriculture,” said Thompson. “It’s always been science, technology and innovation. Our productivity in this country has increased 287% since 1940.”

Thompson added that ag needs to do a better job telling its story. “We’ve been willing to sit back and be accused of contributing to climate change when we’ve always had a positive role in a healthier environment,” he said. “We need to help farmers, producers and processors tell the story of conservative climate solutions that we know are working. The documentation is there, and it isn’t from conservative sources – it’s proven, valid research.” One of six climate bills Thompson is sponsoring is the Sponsoring USDA Sustainability Targets in Agriculture to Incentivize Natural Solutions (SUSTAINS) Act that creates a public/private partnership within USDA.

Thompson believes in principle-based leadership for solving problems. “It’s better to define principles ahead of time and use it as true north on the compass so we’re always focused on the right trajectory to solve problems,” he said. “When it came to climate, we’re following three principles: you cannot have a healthier environment without a healthier economy – if one is compromised for the other, nothing works. Also, always be science-based and not political science. Number three is that it makes sense to start with what we know works, and the Farm Bill works.”

Referencing the 2018 Farm Bill, Thompson said it was the greenest Farm Bill in the history of the country. “We know the programs, whether EQIP or CRP, are the programs that help farmers economically and help the environment,” he said.