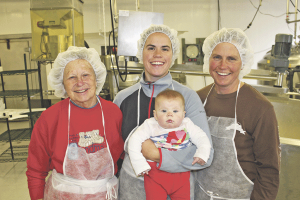 CORTLAND, NY – Every once in a while you taste something so profoundly good, it’s all you can think about. “When can I have it again?” constantly haunts you. You’re obsessed.

Close your eyes and imagine actually drinking a Thin Mint Girl Scout cookie in a glass or savoring the ultimate creamy eggnog as hints of vanilla and warm cinnamon dance on your tongue. You can actually find these seasonal items and other palate pleasers at the Trinity Valley Dairy Farm store or at a local grocer.

Branden and Rebekah (Poole) Brown from Trinity Valley Farm have been working on these flavorful, old-school recipes since early summer to create memorable dairy-inspired products. “It’s our passion to keep giving our customers the best eating or drinking experience fresh from the farm,” said the Browns. This passion for dairy has a lineage dating back over a hundred years when the land on which the cows roamed was known as Sunset Young Farm, originally owned by Otis and Hazel Young.

Trinity Valley is now a fifth-generation family farm in East Homer, NY, where the “Moo Crew” – Ken and Sue Poole, Derek Poole and Branden and Rebekah (Poole) Brown – run the 600-acre owned and rented operation. The 120-head milking herd of Holsteins and Brown Swiss graze outdoors from April until November, and during the winter they eat farm-grown corn and hay. The cows also get silage and a few pounds of grain each day. The Pooles generally work with the cows while the Browns run the processing and retail farm store.

Of the more than 100 dairy farms in Cortland County, theirs is also the first and only “Jugger,” an endearing term for family operations that bottle milk straight from the cow. In 2013, they turned a sweet corn field into a milk production facility and general store.

“We process our milk as little as allowable to help important enzymes and ‘good’ bacteria work for you. The fancy term for this old fashioned method is low temperature vat pasteurization,” said the Browns.

“The milk is held at 145 degrees for 30 minutes and then cooled as quickly as possible. This gives milk (the kind many of us remember as kids) the smooth, sweet taste of yesteryear and preserves the naturally occurring enzymes that help your body easily digest it. Granted, this process takes more effort but we don’t mind,” said Rebekah. “Our milk also is un-homogenized, with a thick layer of cream rising to the top of each bottle. Folks tell us they are again enjoying a cold glass of our cream-line milk. The great taste and nostalgia is worth every minute.”

At first, in working with their milk handler, Preble Milk Co-Op Association, they diverted their milk and bottled 150 gallons a week of chocolate and white cream-line milk. Under the direction of the Browns and plant manager Dan Sykes, who has a background in dairy processing at Cornell, and other staff working alongside him, Trinity Valley now produces over 5,200 gallons of milk a week. They are also making cheese curds, with each pound using a gallon of milk.

The hub of activity is their attractive farm store on Route 13, which features the full line of their dairy products along with locally grown foods. Rebekah oversees the store and the bakery, featuring a wide array of items. The store wafts of Rebakah’s and her mother Sue’s “scratch baked” goodies.

Branden Brown is seemingly a man who barely sleeps, as he does the marketing, logistics and sales for the farm while delivering the milk and products to area supermarkets, local stores and New York City. Early in 2016, after being featured in a New York Times article discussing the modernization of the dairy industry, Brown reached out to Frank Acosta, the proprietor of Manhattan Milk (manhattanmilk.com), a NYC-based farm-to-table delivery service created around the idea of bringing the nostalgia of the milkman back. It seemed the two had the same passion for returning to old fashioned values and giving customers what they were craving – food with a story. 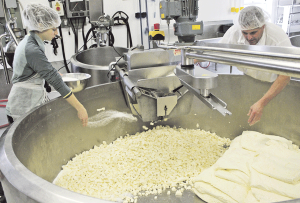 “We believe food comes from local farms, not far-away factories – crafted with love by people who care and delivered with a smile to a space which inspires creativity, collaboration and positive action. Our world is changeable; the future is sustainable,” said Acosta.

It turns out Trinity Valley’s style of farming – small and independent – was just what the company wanted. After several meetings at the farm, the two entrepreneurs came to an agreement and now Trinity Valley Dairy is the exclusive supplier of milk for the Manhattan Milk brand and its home delivery service. Brown also helps other farms that support the business as he adds their products on his delivery runs, lowering everyone’s freight costs.

To stay profitable and sustain the Pooles’ and Browns’ family farm operation, diversification was a needed and wanted step. On-farm milk processing and an active retail sales program in the farm store and through area supermarkets have made differences in everyone’s lives. The Browns also created a corn maze which has added profit on its own and attracted more visitors who purchased items at the store as well. Making ice cream is also on the docket.

“A key to our business is to always be working on new and innovative promotions and products, while focusing on our Trinity Valley Dairy brand and keeping faith and family values high,” said Brown.

Visit their Facebook page for seasonal updates and product information at www.facebook.com/trinityvalleydairy.