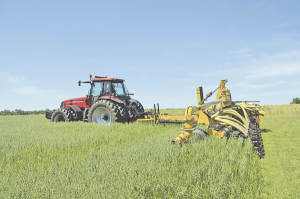 The sheer volume of manure produced in modern livestock production systems and the necessity to use manure responsibly has led to significant improvements in manure application.

Manure must get on the ground, but more importantly, in the ground. Creating a narrow slot and applying manure directly in that slot below the surface with minimal disturbance is becoming more important. More farmers are using this technique to minimize odor and capture more nitrogen that might be lost through volatilization, and it is compatible with no-till systems.

With surface-applied manure, phosphorus buildup can be problematic, especially in the top several inches of soil. “That’s a concern,” said Leon Ressler, Penn State agronomy extension educator, “especially from the standpoint of losing soluble phosphorus in runoff water.” Ressler emphasized the fact that a main benefit of injection, especially in areas where development surrounds farmland, is odor reduction.

“There’s more pressure to reduce phosphorus in surface waters, and that’s a benefit of injection,” said Ressler. “By getting the phosphorus off the surface during application, there’s a good chance of reducing dissolved phosphorus losses.” Ressler added that there’s no way to inject manure without some degree of soil disturbance, but improvements in equipment have reduced the level of disturbance.

Beegle said while traditional tillage has a negative impact on soil quality, no-till systems can reduce erosion and improve soil quality. “However, because we have no way to incorporate the manure, it’s all left on the surface,” he said. “We often see increased ammonia volatilization and increased odor in no-till systems.”

The question is ‘is there a way to get the benefits of manure incorporation and still retain the benefits of a no-till system, and what are the tradeoffs?’ Beegle describes a cooperative project between Penn State University and Dr. Peter Kleinman of USDA-ARS.

One manure application method in the study was shallow disk injection. This involves a large coulter that cuts a slot in the soil, with manure deposited at the bottom of the slot from a tube that runs down beside the coulter. A closing mechanism positioned behind the coulter closes soil over the slot. Beegle said the level of soil disturbance is similar to that of a typical no-till corn planter.

Another manure application method is using an aerator for banded manure. In this system, an aerator pokes holes in the ground and creates cavities, and the manure is deposited from tubes directly behind the aerator. “The idea is that it enhances the infiltration of the manure into the soil,” said Beegle. “The manure runs down into the soil through the cavities.” Beegle said this method isn’t the same as injection, and it leaves a fair amount of manure on the surface; particularly with liquid dairy manure that has fairly high solid content.

Beegle said in a no-till system, farmers must determine how to handle crop residue, one of the key components of no-till production, and manure incorporation.

He describes the results of a trial at Penn State’s Rock Springs research facility comparing no manure to using a chisel plow, disk, aeration and surface application to deposit manure in a corn silage field with a rye cover crop. “We had a little more than 50% residue cover in control plots where no manure was applied,” said Beegle. “Where we incorporated manure with tillage, in this case chisel plow followed by disking, very little residue remained on the surface.”

With the shallow disk injector, surface residue was slightly reduced, but still acceptable at more than 30%; the standard most often used for no-till. “With the aerator, we saw an increase in residue cover,” said Beegle. “This is mainly because of the manure left on the surface.” Beegle said because manure counts as residue, a path of manure over injection holes on the surface is considered increased residue.

Surface application also resulted in increased residue, again due to manure on the surface. “The bottom line is that with low-disturbance injectors, we can maintain residue levels pretty close to what they are with no disturbance at all,” said Beegle. “That should help meet the criteria for no-till production.”

One of the main concerns with manure incorporation is ammonia loss. “We know that manure on the surface can lose a significant amount of ammonia to the atmosphere within a few hours,” said Beegle. “With true injection, we’re completely burying the manure in a slot and covering it with soil, and we see a dramatic reduction in ammonia loss.”

“That’s an important message for farmers who want to incorporate manure and may be waiting a week or more,” said Beegle. “If they’re doing it simply to reduce ammonia loss, that isn’t a legitimate reason for tillage. If they’re not doing it the same day, they’re probably losing most of the ammonia they’re going to lose.”