Preparing for kids at Dell Farm – and all things Alpine 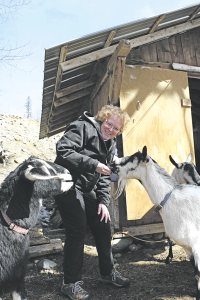 Sheila Litchfield has served as the Superintendent of Goats at the Heath Fair for nine years. She coordinates the fair’s American Dairy Goat Association-sanctioned goat show, which sees 180 to 200 entries in all registered dairy breeds in junior and senior categories. She has served as secretary for the Franklin 4-H Advisory Council for three years.

Litchfield has owned registered Alpine goats for over 40 years. A year after she and her husband, Budge, were married in 1975, residing in Ashfield, MA, they bought their first Alpine doe, named Savory. “That started the whole herd. We named them after herbs and spices, starting with Savory,” said Litchfield. The next year they moved to Heath, MA, where she raises goats, makes cheese and gives custom-designed Artisanal Cheesemaking Workshops, promoting all things Alpine at Dell Farm.

For the past five years, she and Budge have been leaders of the Hawlemont 4-H Goat Club that serves as the community 4-H club, offering project clubs in weaving, bug studies, painting, outdoor adventures, Lego design and robotics for the community’s students.

This 4-H program works in conjunction with the innovative, award-winning Hawlemont Agriculture and You (HAY) program, around which Hawlemont Regional Elementary School has tailored their entire school’s curriculum, focusing on agricultural sciences for students in pre-K through sixth grade.

Litchfield teaches goat husbandry and cheesemaking for the HAY program. Two of her does and a wether are kept at the school during the school year for students to learn about taking care of goats. Vet bills and feed are taken care of by owners who lease other farm animals to the school.

Her other four does are kept at home, with the buck kept at a farm up the road. Three does are expected to kid mid-March. The 4-H Goat Club members come to her home for occasional onsite clinics, such as learning about fetal development. She knows each doe will bear twins, because veterinarian Dr. Amy Tuominen conducted ultrasounds at a recent clinic. Tuominen also performs the animals’ health wellness checks at Hawlemont School.

“Dr. Amy is very patient with the (two-legged) kids, at answering all their questions,” said Litchfield. “Each child is expected to keep track of one doe, and how many fetuses they see. I tell them when the doe was bred, and they calculate the due date, approximately. They mark it on the calendar. Last week our lesson was preparing for the birth of the kids. I did a presentation on what to expect during labor and delivery. I will let them know when the does start to deliver, and if they can get here, they will.”

Most does start labor at night, but the final stages can be any time. However, Litchfield has a pretty good idea of when that might be, as she has learned through each lineage that each doe tends to give birth at a similar time each birthing. “I had one goat that pretty consistently gave birth at 11 o’clock in the daytime. Other goats have other ‘set’ times. I have baby monitors set up in the barn, with speakers in the kitchen and bedroom. When I hear the goat in labor, I go into the barn to be with her.”

This week, members learned about getting the barn ready, but there was far less enthusiasm for cleaning out a barn. Working with the goats is also a lesson in bravery, as the Alpine does are as tall as some of the youth themselves.

“The 4-H program augments the Hawlemont HAY program. In our Goat Club we offer a more in-depth study in all farm animal sciences. Our first lesson this year was chickens; we took apart eggs, looked at feathers under microscopes and studied nutrition and proper care,” said Litchfield. She worked as a nurse for over 44 years. She was Rowe’s Town Nurse for 12 years, serving 15 years as a Heath Select Board member and now on the Heath Broadband Committee. 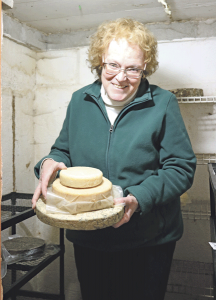 Though Heath as a whole is about to embrace the wireless age, nothing beats the hands-on experience with animals that kids learn through the 4-H club and the HAY Program. The couple are so committed to promoting agriculture that she is treasurer, with Budge is the president, of the nine-member Friends of HAY nonprofit, which raises funds for HAY. It celebrates its first anniversary this April.

For her cheesemaking ventures, Litchfield’s cheese cave happened serendipitously. After they had a drilled a deep well, their cellar’s eight-by-eight-foot concrete water-holding bunker cistern stood empty. She added one more foot of concrete to the top and tested its humidity for a year before deeming it perfect. In winter when the air is dry, she adds some humidity. As her does provide no milk for cheesemaking November through April, she supports local dairies, buying cows’ milk to make her Triple Creme, a mold-ripened soft cheese with cream to increase the butterfat content.

Her cheese is so popular that a local couple requested she make a “cheesecake” for their Leap Year wedding on Feb. 29. The first tier was Parmesan, the bride’s favorite, made with eight gallons of Sidehill Farm milk; the second tier was Tomme, goat cheese made with six gallons of their goats’ milk; the third tier was an English-style goats’ milk cheddar; the fourth tier was another Tomme; and the top tier was her Triple Creme. The entire “cake” weighed 25 pounds.

When she researched online, Litchfield viewed other such “cheese cakes.” She made silk floral wreaths to go around her cheese wheels that could be removed quickly.

“When they cut the cake, the new couple cut into the Triple Creme because it’s easier to cut,” said Litchfield. Then she and her son took the cake into the kitchen, removed the wreaths and cut all the cheeses into wedges to serve. They were promptly demolished by wedding guests.