Prepare for the rise 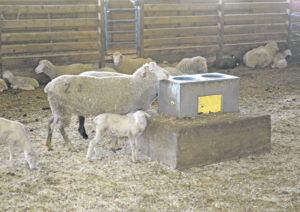 Just about everyone who raises sheep or goats will say internal parasites top the list of health challenges. Susan Schoenian, University of Maryland small ruminant specialist, said the periparturient egg rise is at the core of small ruminant parasite problems, and that understanding this phenomenon is the first step in managing parasites.

“Periparturient egg rise is exactly what it sounds like,” said Schoenian. “It’s an increase in fecal egg count, and that increase is due to an increase in the number of worms in the GI system of the sheep or goat.” The periparturient rise typically begins in late gestation and continues through early lactation. Several factors affect the timing and severity of the egg rise, but the peak usually occurs about 30 days after lambing or kidding.

The terms “periparturient rise” and “spring rise” are often used interchangeably but don’t always coincide. “In most climates, when environmental conditions are not conducive to worms completing their lifecycle, worms enter a hypobiotic, or resting state, in winter,” she explained. “When you lamb in spring when weather is changing, hypobiotic larvae are resuming their lifecycle. Combined with the periparturient rise, the magnitude increases.”

The exact cause of the periparturient rise isn’t known, but it’s believed to be the result of a combination of factors including immune suppression, nutritional stress resulting from fetal growth and nursing young. Schoenian said ewes or does with parasites will produce less milk and have a shorter lactation period, and there’s evidence that clinical mastitis is more common in parasitized females.

The bigger issue is that if the ewe or doe is on pasture, she’s dropping more worm eggs that develop into infective third-stage larvae, resulting in more contaminated pastures. Kids or lambs with insufficient immunity to parasites ingest large numbers of larvae, become parasitized and fail to thrive. The periparturient ewe or doe, especially in springtime, becomes the major source of parasite infection for lambs and kids in spring. Schoenian referred to this as ewes “seeding the pastures” for the summer explosion of parasites.

The first strategy to manage periparturient rise is deworming. The now-outdated recommendation was to deworm all ewes and does around the time of lambing and kidding, or before turnout to spring pasture. “The problem with that strategy is it selects for resistant worms,” said Schoenian. “The more we deworm animals, the more resistant they become, especially if we deworm all because we don’t leave any worms that remain susceptible to dewormers.”

To avoid resistance, deworming must be done with highly effective products. The current recommendation is using combination treatments for clinically parasitized animals, which means selecting two dewormers from two different dewormer classes. Multiple dewormers should not be mixed and given as one treatment due to chemical differences in products. Instead, administer products separately and at the full dosage rate as indicated by the product label.

Targeted selective treatment involves selecting animals that will benefit the most from treatment rather than treating all animals. For the periparturient animal, deworming (or not) should be based on FAMACHA score. “Deworm any ewe or doe that has a FAMACHA score of 4 or greater,” she said. “That’s light pink or white.”

Any animals with a body condition score of 2 or lower and females with three or more offspring should be dewormed. First-time mothers, particularly yearlings, are more susceptible, especially with multiple offspring, and should be dewormed, as should high-producing dairy goats on browse or pasture.

Keeping animals on a dry lot or confinement with no access to grass can help reduce larvae transmission during the periparturient rise. Weaned lambs for market raised on dry lot until marketing shouldn’t require deworming. Replacement lambs should be exposed to pasture at some point to ensure development of resistance to parasites.

Additional strategies to manage the periparturient rise include grazing on sericea lespedeza (or Chinese bushclover), a warm season perennial. The condensed tannins in this plant have shown to have an antiparasitic effect on barber pole worm and coccidia in both hay and on pasture.

BioWorma, a fairly new product, is a fungus that traps and kills larvae in feces. Studies show BioWorma can result in 50% to 80% reduction in larval activity on pasture. While an animal that needs to be dewormed should still be dewormed, BioWorma helps prevent pasture contamination.

A long-term option for managing parasites is genetics. One option is to choose resistant breeds such as hair sheep, Kiko or myatonic goats. Use proven sires when possible and cull problem animals. Schoenian warned producers to be aware that high-producing females may show temporary high parasite levels, and those females should be observed to ensure they aren’t culled unnecessarily.

Producers can initiate an on-farm selection program to select for parasite resistance. The most accurate way to select for parasite resistance is through fecal egg counts (FECs). “If you select on the basis of FAMACHA scores and whether or not the animal needs treatment, it isn’t that accurate and you aren’t necessarily selecting for resistance,” said Schoenian. “You’re selecting for resilience, which is the ability to tolerate infection.”

Selecting lambs or kids for parasite resistance is challenging because levels of infection must be high enough to determine any differences. To obtain a high rate of infection, young vulnerable animals must be subjected to parasites, which can present problems. The alternative is to select older animals that are less likely to succumb to heavy parasite loads.