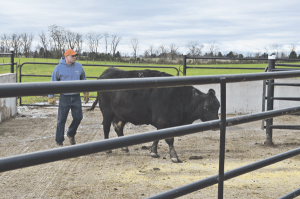 Why does pregnancy detection matter?

Because profit (or loss) of a beef cattle operation is closely tied to reproductive efficiency, producers can’t afford to guess when it comes to pregnancy detection.

Dr. Ky Pohler, Department of Animal Science, Texas A&M University, explained there are four pivotal periods during which pregnancy loss in beef cattle is most likely to occur. “We need to think about when pregnancy loss is highest and work around those as we develop strategies utilizing currently available technology,” he said.

Fertilization rate isn’t a problem in beef cattle – about 95% of the time, in cattle bred live or via AI, fertilization has occurred. “From day seven to day 28 of gestation is the first time, with the technology currently on the market today, that we can accurately determine pregnancy status,” said Pohler. “We go from about 95% pregnant to 70% pregnant. This encompasses about a 25% loss characterized as early embryonic loss.”

Several factors are associated with early embryonic loss, including failure of maternal recognition of pregnancy and asynchrony between the uterus and the embryo. This loss is often not seen by the producer because the cow cycles again and is rebred the same breeding season.

“From day 28 to the next pivotal period of pregnancy loss, day 60, there’s another 8% loss,” said Pohler. “It’s characterized as late embryonic loss – a loss after the detection of a heartbeat. These are the cows we detected as pregnant, turned them out to grass but then they don’t produce a calf.” From day 60 to calving, there’s a very small chance of pregnancy loss.

The reason any of this matters begins with pregnancy diagnosis and eventually influences weaning weight and calf value.

Pohler used an example of one group being the timed AI calves born on the first day of calving season. The next group is cows that were bred via timed AI, lost an embryo in the first 28 days, then cycled again and were bred to a cleanup bull. These cows’ calves are at least 21 days behind the first calves.

“In the late embryonic loss group, cows lose a pregnancy after day 28 of gestation,” said Pohler. “We confirm them pregnant at some point, then they lose the pregnancy. They are rebred toward the end of the breeding season. In a 60-day breeding season I’m estimating their calves are at least 60 days behind the first timed AI calves.” Again, the last group includes cows that lose the pregnancy and never become pregnant.

Using market values for calves in a given region, the producer can then estimate the calf value on a per pound basis and determine loss. “You can estimate the amount of money you’re losing on a pounds weaned/day of age,” said Pohler.

The cow that goes through the entire season and never becomes pregnant becomes the biggest cause of financial loss. “In early and late embryonic loss, we’re losing money in both situations,” said Pohler. “However, in late embryonic loss, the cows we confirm pregnant and they lose the pregnancy in that breeding season but still conceive and have a calf, they still lose a fair amount of money.”

One major consideration is that all cows in the herd cost the same to maintain, so producers benefit by developing pregnancy diagnosis strategies using technology to minimize loss and maximize profitability. Knowing the pregnancy status of the herd helps with management decisions and nutrition plans for stages of pregnancy. Pregnancy status also helps determine marketing plans.

According to Pohler, the ideal pregnancy test has high sensitivity and high specificity. “We have to be able to identify pregnant animals and non-pregnant animals,” he said. “It needs to be simple and inexpensive. It would be nice to do a pregnancy diagnosis at day 28 and determine whether the cow is going to have a successful pregnancy and get through that late embryonic stage instead of just having a snapshot in time.”

Pregnancy detection has come a long way from when producers simply waited for a cow to have a calf, or perhaps conduct a visual or manual examination of the abdomen. Pohler said while waiting for the cow to calve is the oldest, most reliable and most often used method still on the market today, it’s a highly inefficient method. Initial mammary development is also an early detection method but unreliable. At 35 to 40 days, manual (rectal) palpation of the uterus can detect pregnancy, and at 20 to 30 days, ultrasound, blood- or milk-based tests are suitable. Several technologies such as milk progesterone testing are available for detecting pregnancy under 20 days, but have proven to be somewhat inaccurate.

Current options for reliable pregnancy detection include rectal palpation, ultrasound and chemical-based pregnancy detection. “None of these are better than the others,” said Pohler. “And there are a lot of management decisions that go into what is best for your operation. It’s critical to pick something that works well for you, and don’t just do it because your neighbor is doing it.” Pohler pointed out that facilities, location of cows and animal temperament can potentially limit pregnancy detection options.