Pony racing: A short order of the Sport of Kings 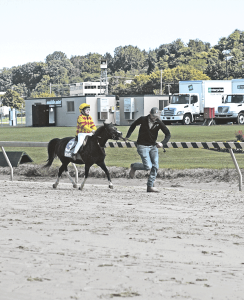 One of the wonderful things about being a kid with a pony is the moment they feel brave enough to take that pony out and see what it can do. The ability to ride at speed underlines the time it has taken to learn to do things the right way to be safe as well as the ability, courage and trust in their pony the child has achieved to be able to race with their animal.

Now, thanks to the U.S. Pony Racing Association (USPRA), kids have a chance to do this in public on real race tracks. The USPRA, operating under the aegis of Regina Welsh out of the Butler, MD, office, has taken pony racing from fields and blue jeans to tracks and jockey silks, complete with photographers, finish line judges, post parades and, sometimes, even a bugler for each race.

All efforts are bent toward making this a safe sport for children. The ponies and their riders have to have some obvious ability to engage in the sport; clinics are staged and encouraged. All riders are screened to ensure they have the ability to control their mounts and that they have knowledge of race rules and procedure.

The races at the track at Timonium, MD, during State Fair week had both walk and walk-trot races with ponies often led by a parent and the child (dressed in colorful race wear complete with mandatory helmet) held on the pony by the other parent as the pony was encouraged to make all speed possible in the stated gait for a short distance down the track.

After each race there was a winner who received a trophy and a group picture of all of the young riders, each of whom received a goody bag for participation. The whole idea of pony racing is not winning but promoting a sport that engenders a comradeship of participation in a pony-sized, somewhat fast and yet thrilling sport.

Not that there is not keen competition among the older riders. These riders may start from a standing start instead of coming out of the starting gates in the often quarter-mile distances of the larger racing world. The speed of their small mounts is often enough to make bystanders marvel.

It is a requirement that all the kids wear approved helmets and protective vests. The ponies must wear overgirths (like those of real race horses that protect against accidental broken girths and/or saddle slippage) as well as yoke/neck straps to catch hold of for balance.

Racing silks are definitely a part of the whole pony racing scene. Used silks are usually about the right size for a child of the size to ride the medium and larger ponies. The one caveat of the silks is that the front and the back of your silks must match. 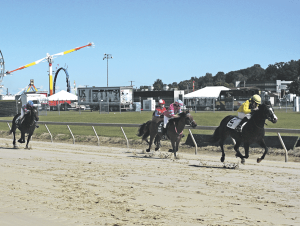 As with any sport it is necessary to do your ground work. A “racing pony” is generally a pretty good riding pony with good manners and a solid intelligence. Most ponies enjoy a chance to get out and run once they get a taste of the game. The riders too must learn the game. There are clinics and schooling classes for the children as well as the ponies and all are listed at www.usponyracing.com .

For the eager rider, there are also races over small fences, often tie-ins to steeplechase races. Steeplechasing is the racing of horses across open country while jumping natural obstacles such as fences and brush jumps. The jumps for the pony set are properly sized. For families with registered Shetland ponies there are designated Shetland races as well. Most of the racing cards have races divided into small, medium and large entry groupings.

For those families who have found the show ring either too exclusive or too boring, pony racing may be the way to put spark back into a life where that pony in your back paddock may not be achieving its full potential. It could well be your neighborhood’s next star racing pony.