Ponies of all breeds showcased at Bel Air Equestrian Center 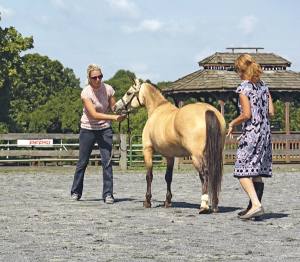 The Maryland Pony Breeders Inc., the oldest pony breeder organization in the U.S. dedicated to the promotion of all pony breeds and disciplines, held its annual show July 13 and 14 at the Bel Air Equestrian Center in Harford County, MD.

This is a multi-breed pony show which this year had divisions for Welsh and Shetland ponies as well as a halter division for Highland ponies. Within each of the different breed divisions were classes for the many and different uses of those ponies.

The thing about ponies is that they are so inclusive. The tiny Shetland pony, whose top height is listed with the Foundation Shetland Pony division, is a mere 42 inches (but can go up to 46 inches with the Classic and Modern division of the breed), can be a focal point of many family partnerships. The Shetland is small and docile enough for the youngest person in the family to lead in the junior showmanship class – listed as open to 8 years and under – or for Mom or Dad to drive in the open driving class which is often entered by the adult members of the Shetland community.

The hardy little Shetland was used as a coal miner’s pony in its native Shetland Isles so it is historically strong enough to pull a large person on a pony-sized cart and is popular with the driving community outside of its breed organization. Their gentle temperament offers the safety necessary to the smallest of the children on the ground or in the saddle and complements an adult driver who wants to drive in relative harmony and quiet. It comes in all colors, even pinto.

For the slightly older child who is more experienced in the saddle there are riding classes at the walk, trot and canter, plus three jumping classes (which is a sport at which the Shetlands excel).

The other very large group of ponies seen at the Maryland Pony Breeders are the larger and somewhat more glamorous Welsh ponies. Welsh ponies have been divided into four height divisions – section A or Welsh Mountain Pony with a maximum height of 12.2 hands; section B or Riding Type with a height between 12.2 and 14.2 hands; section C, the Welsh Pony of Cob Type, with a maximum height of 13.2 hands; and the section D or Welsh Cob with a minimum height of 13.2 hands. The only colors excluded from the Welsh registry are tobiano or overo (the Pinto colors).

What is usually seen at the shows are the Welsh Mountain/Section C, whose appearance shows elegance as well as real pony usefulness. There seems to be a preponderance of gray ponies, but chestnut, black, palomino and bay are well represented in the ring at the shows. These ponies are the equitation ponies for children and the hunter ponies both in the ring and for fox chasing. They are natural jumpers and excel over fences, but are also in demand as driving ponies because of their long elegant action at the trot. They are also western pleasure ponies.

The Welsh have another use in the pony breeding world. They cross beautifully with the Thoroughbred to create the athletic and lovely larger ponies, called cross- or half-breeds, which can be seen in the top show rings in the nation. These are the glamor ponies that do the undersaddle classes with elegance and sail effortlessly over fences at the national shows from the northern circuits in the summer to the best of the Florida shows in the midwinter circuits.

The Maryland Pony Breeders show had a full complement of ponies in the three divisions and the 133 classes that were offered gave all those who were there to show their ponies a chance to compete. 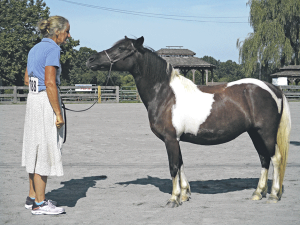 Also offered at the conclusion of the working classes were the Futurity Classes, which are the backbone of a breeders show. The Futurity is where the breeders show their young, homebred ponies, the foals of their mares and the stallions they either own or they have chosen as the perfect cross for their mares. The Futurity is where breeders take their foals, yearlings and two-year-olds that are too young to be ridden under saddle and compete in halter to be judged on their type and conformation alone against other breeders who are just as keen to see how their young stock stacks up against the ponies from other breeding programs. This is where a year’s worth of hard work and financial outlay is brought out into the show ring to compete and be judged.

Maryland Pony Breeders Inc., founded in June 1953, is still hale and hearty and continues to offer Maryland – traditionally a strong pony breeding and using state – the services it needs to move forward into the coming years. Information about the organization can be found at marylandponybreeders.org . It also offers an informative directory for and about their members. Contact mbenedic65@aol.com for a copy of the 2019 directory which lists the members of the Maryland Pony Breeders and the available stallions, mares and young stock.