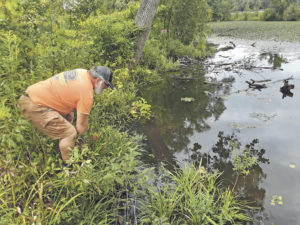 Whether it waters stock, provides recreation or simply collects excess water, a pond graces many farms. Taking care of the pond can help keep in balance in the local ecosystem. Andrew Lazur, water quality specialist with the University of Maryland College of Agriculture & Natural Resources, presented “Basics of Pond Management” as a recent webinar hosted by the University of Maryland as part of the MidAtlantic Women in Agriculture webinar series.

“Watershed and soil affect pond water quality,” Lazur said. These can include both nutrients and pollutants. He listed the parameters as temperature, pH, ammonia, nitrite, phosphorus, dissolved oxygen, carbon dioxide and alkalinity.

Animals eliminating in the pond provide one source of nutrients, such as heavy goose populations. That can cause excessive algae, plankton and organic matter build-up. Phytoplankton take up nutrients and produce oxygen, but too much phytoplankton can die off, causing low oxygen. Filamentous algae can indicate excess nutrients.

As plant matter dies and decays, it consumes oxygen and leads to hypoxia and anaerobic conditions. This can also lead to pond volume loss as material accumulates.

At the bottom of a pond, hydrogen sulfide and nitrogen are produced under anaerobic conditions. Excessive organic matter, such as fallen leaves, decompose and can create a dark, anaerobic soil layer.

Lazur said typical management is to try to reduce the amount of nutrients entering a pond.

Oxygen cycling depends upon the time of day. Lazur said that it is lowest around 6 a.m. and at its highest around 6 p.m. because of photosynthesis.

“If you see fish at the surface, gasping for air, it’s typically during the early morning hours,” he said. Using an aerator can help get more oxygen into a pond.

Many people notice a green tinge to their farm ponds and think that something is wrong or that their pond is unhealthy. Lazur said that is the phytoplankton – and it’s not a bad thing.

Water quality management also has to do with oxygen cycling. “If you have good sunlight activity and a couple of cloudy days, those oxygen levels can be reduced over time,” Lazur said.

“It follows the oxygen cycle and is because of the plants’ growth,” Lazur said. “They take up CO2 and also produce oxygen. When you have a lot of CO2, it’s an acid, which drops the pH.”

Aquatic plants offer benefits and drawbacks. Benefits include oxygen production, wave damping, turbidity control, habitat and erosion control. The cons include oxygen consumption, unsightly appearance, off-flavor in fish, odor problems and interference with uses. But too many plants cause drawbacks. For that reason, “you want to maintain a balance,” Lazur said. “You want some aquatic plants, whether phytoplankton or emergent species.”

Aquatic plants include floating, algae, submerged, emerged and marginal. Floating appear across the pond’s surface. Algae are the phytoplankton. As their name denotes, submerged live under the water’s surface, rooted to the bottom of the pond; emerged plants show above it. Marginal plants live along the pond’s banks.

The most common plant in ponds, algae can be either microscopic (phytoplankton) or visible (filamentous algae). Either can tint ponds with the ubiquitous blue-green color and can cause odors, but filamentous grows in dense mats that can clog ponds’ use for fishing or swimming. As a major producer and consumer of dissolved oxygen in pond water, algae also engage in photosynthesis and decomposition.

Duckweed and water hyacinth are examples of floating plants. “They’re there because there’s sunlight and nutrients,” Lazur said. Though rooted, but not often anchored, these plants move with wind action. They can cause odor problems.

Ponds with clear water may reveal submerged plant life like hydrilla, elodea and coontail. “Crystal clear water isn’t particularly a good thing,” Lazur said. “It’s good to have a little green phytoplankton color as they help shade out other plants.”

Submerged plants are rooted and tend to have weak stems. They obtain their nutrients from the water and can grow long, which can be problematic in shallow waters.

Marginal plants along the shoreline include maidencane and phragmites. “Cat tail can be very invasive,” Lazur said. These rooted plants obtain nutrients from the soil and some can grow up to three feet from ponds and into shallow pond water. They proliferate quickly.

That is why controlling but not eliminating aquatic weeds is important. Lazur said prevention can include reducing nutrient input and using beneficial plants.

“If you can prevent, that is the best way to do it,” he said. “Whatever’s going on in your watershed, reduce the amount of nitrogen and phosphorus that’s coming in. Don’t mow the perimeter too short. Anytime you remove vegetation, you have to understand that they’re there for a reason and they’ll come back unless you reduce the amount of nutrients entering the pond.”

Where permitted, sterile grass carp can help control aquatic weeds. Herbicides may also help. Riparian buffers, pond buffers and floating wetlands are all examples of helpful strategies. “The idea is to use plants to reduce the amount of nutrients going into the pond,” he said.

He encourages landowners to know basic pond management practices, including knowing the watershed and water inflows. “It’s always good to know what’s going on with your pond,” he said.

Testing the water helps give a picture of its quality. “If you can understand some of the basics, like alkalinity, hardness and pH, that will help understand what’s going on,” Lazur said, “particularly alkalinity, which is important for using herbicides.”

For those who want to stock a pond for recreational fishing, it’s important to stock at the right rate per acre of pond based upon species and fertilization.

“You have to understand that there are limitations here,” he said. “You may need to reduce the rate if you’re using the pond for irrigation.” If a pond tends to get low during droughts, that can also affect stocking rates.

“The big thing we recommend is to not feed or encourage,” Lazur said. “They are heavy nutrient contributors to ponds. With a farm pond, try to reduce the erosion with planting buffers along the side. Ponds near a lot of trees – it’s unavoidable to have all that leaf litter over decades accumulating along the bottom, releasing nutrients. That’s a challenging issue, dredging and cleaning out ponds.”