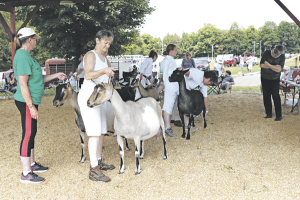 Heath Agricultural Society president for two years Jessica O’Neill resides in Heath, MA, with her family. “I moved to Heath in 2012. The first meeting I attended was in January 2013. It’s always impressed me how it brings the community together to put the event together. A resident told me that this is one of the best kept secrets in Massachusetts, and he attends fairs all over.”

Prior to becoming president, O’Neill had time to enter some of her flock of 27 chickens at the 100th Heath Fair, but she’s far too busy now to show chickens, though she managed to squeeze some items into the agricultural exhibits tent.

A new event this year was the Hilltown Sleddog demo given by Chesterfield’s Marla BB, 2017 IFSS Gold Medalist of North American Rigs within the sled dog industry.

“We make little changes to keep up with the times, but keep it mostly the same so it is the fair the people recognize, to keep it special,” said O’Neill.

Organizers strive to keep attendees, especially children, interested in all aspects of the fair to promote agriculture to keep farming vibrantly alive for future generations. Thirty pounds of carrots were used to make carrot whistles inside the agricultural tent. Other hands-on kids’ activities were shelling corn, making rope or making squash horns out of squash vines and pumping water.

“These activities predate cell phones, and some of them, even having electricity,” said O’Neill, for children to get a chance to appreciate their modern conveniences. Also featured were wool spinners and people whittling wood. 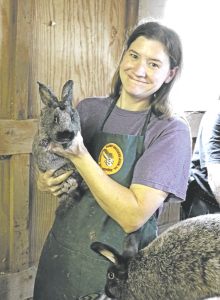 For the zucchini race, like a soapbox derby, children either brought their own or were supplied zucchinis to race them on a wooden track, an event that had been brought back for the 100th anniversary fair, and a kids’ watermelon contest.

All weekend, musicians serenaded the crowds, and there was food in the main tent: blueberry pancakes, Heath Firefighters Association chicken barbecue, hamburgers with beef from Freeman Farm, apple pie supplied by Hager’s Farm and more. Proceeds from the Franklin County 4-H Food Booth and money from their collection of fair-goers’ empty bottles went toward the sustainable agriculture Hawlemont Agriculture and You (HAY) program at the Hawlemont Elementary School in Charlemont.

The nonprofit group Friends of HAY was started to keep HAY thriving long-term at Hawlemont Elementary. Organizer of the fair’s American Dairy Goat Association show, Sheila Litchfield and her husband, retired school principal Budge Litchfield, both of Heath, have been involved in HAY since its inception five years ago. The program offers seven different 4-H clubs that children can join and attend as part of an afterschool program. Each club meets one day a week. “The HAY program is so incredibly wonderful. Members of the community come as volunteers or to teach workshops,” she said.

Litchfield has raised goats for over 40 years and involved with the ADGA-sanctioned goat show for 11 years (since it started at the Heath Fair). She supplies three Alpine goats for Hawlemont’s HAY program. The trio of goats are currently vacationing – just like other school “kids” – at her home, with the rest of her goats. She has eight registered Alpines and a registered Alpine stud buck.

“I don’t take goats that I’m milking to the school,” said Litchfield. She teaches cheese-making and goat husbandry for the HAY program. At the fair she streamlined the 200 goat show entries and handed out ribbons. An Alpine doe, Lady’s Choice Georgia On My Mind, won Grand Champion, Best of Breed and Reserve Grand Champion and is owned by Beth Corbett from Kingston, MA, who brought 14 goats to the fair. Corbett milked her goats immediately after judging to the delight of some fair attendees who had never before seen a goat being milked. 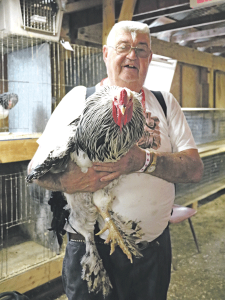 Sixty rabbits were on show, overseen by Shirley Tombs, superintendent of the Rabbit Barn for over 40 years. The rabbit show judge, Alesia Tricket of Winchendon, MA, chose Bradley Tombs’ New Zealand White buck as Best in Breed and Best in Show.

Fifty sheep were entered in the sheep show.

Shelburne Falls resident and member of the Heath Ag Society Board of Directors Conrad Halberg has been superintendent of the Poultry Barn for 25 years, since it was built as an addition to the rabbit barn. The first year a total of six chickens were entered, all Light Brahmas owned by one man. Halberg purchased some of his chickens. The next year, that man did not return, and Halberg had the only entries, Light Brahma offspring of the chickens that he had purchased the year before. Word got out about the show, and this year there were 92 chickens entered.