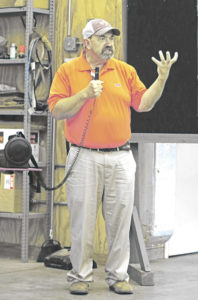 “Never base a soybean variety choice on one location and one year’s data,” said Virginia Tech Extension soybean specialist Dr. David Holshouser at Virginia Soybean Field Day. The event was hosted at the Eastern Virginia Agricultural and Research Extension Center (EVAREC) in Warsaw, VA, on Sept. 23.

Holshouser reported that around 200 soybean varieties, both full season and double crop, are being tested in five locations around the state. Late group threes up to fives are included in this year’s variety tests. Conventional, Xtend, XtendFlex and Enlist varieties are included.

“We’ve really been seeing soybean yields take off,” Holshouser said. Half a bushel per year increases have been due to improved genetics and production management. Virginia producers have been selecting earlier varieties. However, Holshouser recommended that producers spread out maturity groups due to variable weather, especially rainfall timing. He noted that maturity group fives can shine on poor soils.

Holshouser is part of a working group that has produced an online database of soybean varieties in the Mid-South. The database can be accessed at marketviewdb.centrec.com/?bi=MidSouthVarietyTrials. Researchers from North Carolina State University, University of Arkansas, University of Kentucky, University of Tennessee and Virginia Tech have contributed to this database, which is funded by the United Soybean Board. “This database will be of great value to our growers,” Holshouser said.

Although infection occurs early, symptoms are not usually visible until later growth stages, specifically pod fill. When soybeans are filling pods, there is more demand for water and nutrients. The plants cannot keep up because their vascular system and roots have been compromised by SDS, Langston explained. He recommended planting later in the season and growing SDS- and nematode-resistant varieties to prevent soybean SDS.

Dr. Tom Kuhar, Extension entomologist, provided an update on corn earworm control. The resistant genes in the population have stabilized due to the use of non-pyrethroids. He suggested rotating crop protection chemistries and utilizing natural enemies in management programs.

Additionally, Zhang’s team is researching methionine deficiency and trypsin inhibitors in soybeans. Methionine deficiency limits the economic and nutritional value of the crop. She hopes to identify genetic markers associated with higher methionine content and understand the relationship between the content and the environment, including location and fertilization. Trypsin inhibitors in soybean cause low efficiency of protein digestibility. The CRISPR-Cas9 gene editing technique allows for the removal of genes to decrease the trypsin inhibitor.

Another exciting project being conducted by a team of soybean researchers involves remote sensing with unmanned aerial vehicles (UAVs). EVAREC superintendent Dr. Joseph Oakes is leading the project with the hopes of reducing personnel hours in the field and improving data accuracy. Aerial imagery will be collected in Warsaw and then analyzed in Blacksburg and Suffolk. Their goal is to streamline and standardize the process of collecting data that are used to make breeding selections.

Virginia Farm Bureau Grain Marketing Manager Robert Harper told field day attendees that he is optimistic about soybeans, and that they are still at a profitable price level. Brazil’s soybean production and U.S. final production levels will both impact final pricing.