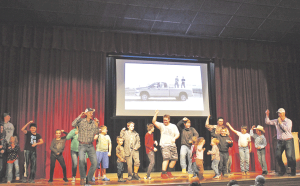 MUNNSVILLE, NY — In adventuresome farming fashion, Greg and Nathan Peterson and their wives, Brooke Anna and Riley flew from Kansas into New York City, rented a car and navigated through the maze of congested traffic and city tunnels to bring their inspiring and entertaining story to the rural Stockbridge Valley Central School. It’s just another day in the life of the country YouTube sensations and social media influencers.

With over 50 million views on YouTube for their 16 original and parody song videos, they are becoming comfortable with extensive traveling all over the world to more than 70 events a year between planting and harvest. Like farming, it takes passion and hard work to make it all happen, including leaving their 3rd brother, Kendal, back on the farm to help their parents keep things running smoothly.

The 5th generation family farm located near Assaria, KS (population 300) is used to juggling the many facets of agriculture. The Peterson Farm brothers and little sister are made up of Greg (28), Nathan (25), Kendal (22), and honorary “bro” Laura (18) Peterson along with their parents, David and Marla and wives, Brooke Anna, Riley and Caelan.

The Swedish ancestry operation, homesteaded by their great, great grandfather in the 1800s, use the three farmsteads to primarily raise about 1,000 head of beef cattle in their backgrounding feeder operation along with a small cow/calf herd. They grow corn, alfalfa, and forage sorghum as feed for the cattle and grow wheat, milo, soybeans, and sunflowers for cash crops on about 2,000 acres. It also provides the ingredients to entertain and educate millions of fans.

It’s why the over 320 guests packed the Charles E. Stratton Auditorium in supporting the Stockbridge Valley FFA Alumni fundraiser. Greg and Nathan didn’t disappoint the enthusiastic crowd. They started their evening of singing and storytelling with a rendition of their first video in 2012, “I’m farming and I grow it”, (Fa parody of LMFAO’s “I’m Sexy and I Know It”). The crowd learned about the incredible backstory of their success: “We enjoyed growing up on the farm, raising cattle and your typical Kansas crops,” said Greg. “We were always trying to convince our friends in school that farming was cool, however, we could never imagine the response for our first video.” 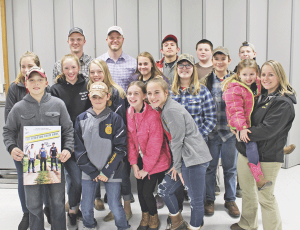 Greg, the main video production creator and Kansas State University agriculture communication’s graduate with a minor in music, said his friends used to always joke with him about his choice of a minor, asking if he was going to make a career out of singing to the cows. As it turns out, that wasn’t too far off. Nathan, who also majored in agriculture, technology management and agronomy at K-State quipped, “Kendal and I were a little skeptical when Greg brought this idea home to us. We wondered what our friends would think. We knew if it was going to be any good then Greg would need our help, LOL, so we went along with it and got the filming and editing done, and showed it to a couple of friends.”

The rest they say is history as their video was published on June 25, 2012. Their absolute best guess was 50,000 views. The video went up on their personal social media pages and their friends shared it, and still more friends shared until it went viral. “By the next morning after we posted it, we had over 20,000 views and had local newspapers calling us, saying that everyone is talking about our video and wanted an interview,” said Peterson. “The next day, we had every single TV news station in the state of Kansas parked in our yard.”

By the fourth day, they found themselves in Times Square readying for a TV interview on Fox News. The morning of the interview (29th) they had surpassed 1 million views. By July 2, they made headlines in the Associated Press with an incredible 5 million views and were propelled on a path to farming entertainment stardom. “It was so positive and profound we wanted to do another one,” said Greg. This paved the way for their all-time high (17 million viewed), “Farming Style”, a parody of the popular “Gangnam Style” and its unique dance style.

To the delight of the auditorium, youngsters poured on to the stage and joined the brothers in singing and dancing to the iconic song. SVCS Ag & Tech teacher and FFA co-advisor, Patty Waldron, praised the farm boys for their fun and educational interactions with parents and students of all ages, “They are outstanding young men and absolutely awesome.”

They continued showing videos and telling stories about each parody video inspiration. “Our videos not only show a lighter side of farming they actually support the musical artists that composed the original songs,” commented Greg. “We also feel blessed to be in great company with other farming social media influencers that are telling their own stories. Social media is a double-edged sword but we use the various platforms to tell our story and talk about truth in agriculture.” 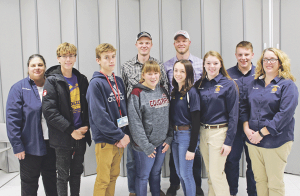 “Having been around the world, farming is different everywhere. However, the farmers are pretty much the same; kind, passionate and hardworking. This journey we’re on has solidified our view on the importance of culture in agriculture,” said Peterson. They still think the best way to educate the public is to talk one on one and giving a customer a farm tour. “We think 4-H and FFA programs are great ways to prepare young people in finding their voice for agriculture,” said Nathan.

After their final video performance of “Chore” (a parody of Katy Perry’s “Roar”), they convened in the cafeteria for a meet and greet that saw the capacity crowd buying tee-shirts, taking personal pictures and getting autographs and selling out all the brother’s merchandise. It’s high praise for the farm-rocker celebrities that have over 80 million followers in 237 countries.