Perils of the pit 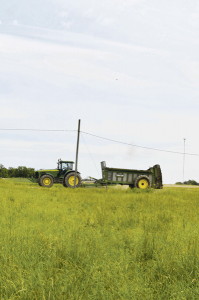 When he conducts trainings for producers and manure haulers, Penn State senior Extension associate Rob Meinen stresses safety along with the fact that most manure incidents go unreported.

“Loss of consciousness occurs without a report,” he said. “I know of six people who have gone through an unconscious phase at some point at a manure storage – four with liquid systems and two with solid manure in the poultry industry.” Meinen added he also hears reports of heifers, dairy cows and finishing hogs that die without a report made, which means the issue is bigger than realized.

All manures produce gas because manure is organic material in some form of microbial degradation. “Whether it’s solid or liquid, hot or cold outside, something is happening in manure,” said Meinen, “and gases are a by-product of those processes.” The gases most likely to cause problems include hydrogen sulfide (H2S), ammonia (NH3), methane (CH4) and carbon dioxide (CO2), along with lack of oxygen.

Meinen mentioned an incident in which a producer was washing an empty swine finishing barn. “The fans were off to save money,” he said. “The producer was washing the barn, knocking back foam in his under-floor manure storage pit. He was unknowingly releasing methane, and the methane went to the ceiling. The heater kicked on, a ball of fire went through the barn and buckled the metal roof. The producer suffered third-degree burns.”

As molecules seek equilibrium, a gas molecule will flux off into the air and leave a hole in the equilibrium of the concentration at the manure surface and more ammonia will try to take that place as equilibrium is established. However, during agitation, the upper stratified concentration is changed, resulting in uniform concentration throughout the storage.

Meinen described some important terms that relate to what happens in manures storage. Flux is the action of flowing; ebullition involves loss of gas. “Ebullition is the action of bubbling or boiling,” he said. “Some gases release through ebullition – hydrogen sulfide is the most important one we worry about. Methane and carbon can also emit this way.”

Meinen said in the storage pit, microbes are producing gas as a result of metabolism. The gases are excreted as a by-product into the manure solution. The gases eventually reach a high enough concentration that they exceed their individual gas solubility in that solution. Every manure is different, and gases each have different solubility. “Once these gases exceed their solubility, they create a bubble,” said Meinen. “That bubble can jump to the surface, and may or may not create foam.”

Warm weather greatly increases the risk of manure incidents. Studies show that 60% of incidences occur between May and August, and 26% occur in August. This is due to manure storages being empty in spring, and land is not available for manure application. “We have to hold onto [manure] for months,” said Meinen. “Storage accumulates a mass and depth of manure that will be anaerobic. It’s the warmest time of the year so microbes are going to be very active.” Meinen added that anaerobic manure is pretty much undisturbed, which allows the buildup of gases in solution.

“We have a whole chain of manure ‘food’ available,” said Meinen. “The microbes are going to break down those molecules and make them smaller and smaller. Some of the gas-producing microbes are actually at the bottom end of this degradation chain. In August, some of the stored manure has been in storage for four months, but some of it may have been there only for hours. There’s a continual supply, in that we have the entire chain available, and the microbes are operating the best they can all year.

“Complacency is not good, even in winter,” Meinen continued. “It isn’t uncommon for us to hear ‘They’ve gone in there to repair that item many times’ or ‘He has agitated that manure storage many times and we haven’t had an issue,’” he said. “Our normal daily practices need to prevent risk.”

Manure handling is one of many areas on the farm where the agricultural work ethic, which includes the notion that we all want to work until the job is done, can backfire. “If complacency kills, what can prevent that?” said Meinen. “Standard operating procedures and good habits can provide some level of protection.”

Meinen encourages anyone working with manure to always use a monitor, and observe agitation from a distance. He added that using remote switches located on a manure agitation boat is a significant safety boost. “You can be 100 yards away and shut agitation down,” he said, adding that this technology should become more widespread among haulers, producers and equipment companies.

Operators should be positioned up and away, and not reach over the edge of manure storage to adjust or maintain machinery near the edge. “The first hour of agitation is the worst, but never let your guard down,” said Meinen. “Consider the proximity of livestock, and remember that gases ‘throw’ in the direction of manure agitation.”