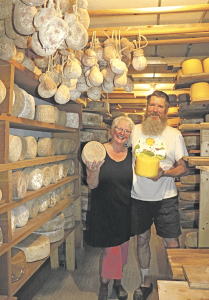 PUTNEY, VT – For Peter Dixon of Parish Hill Creamery, an icon in the cheesemaking world, the milk must be perfect to make their seasonal raw milk cheese. A cheesemaker since 1983, he started Parish Hill Creamery in 2013. Since 1996, he has done cheese consulting through his business, Dairy Foods Consulting, as well as teaching cheesemaking. When someone has a cheese problem, they put him on retainer or send him their cheese.

Success “depends on the quality of milk you start with,” said Dixon’s wife, Rachel Fritz Schaal. “You can ruin cheese made with ordinary milk, but if you don’t start with something great, you can never turn it into something magical.”

Besides technique and skill, their cheese depends on milk from cows fed no fermented baleage or silage. Enter nearby Elm Lea Farm, also in Putney, VT. From the start, with all his years of cheese problem-solving under his belt, Dixon made sure they had a very clear contract with Elm Lea Farm to cut off this kind of problem at the pass.

“A farmer might think if they mix just a little fermented feed, it won’t be a problem. There can’t be just a little bit, just like you can’t be a little bit pregnant – it’s all or nothing,” said Schaal. “We really have each other’s best interests at heart.”

Milk from cows fed fermented feed can cause a defect in cheese called late gas blowing, which presents as big air bubbles that show up as large cracks in cheese wheels, misshapen cheeses and bad taste. They could feed it to their pigs, as they also raise pork.

But they want to make perfect cheese for their niche market, supplying restaurants and cheese shops in New England, New York and Los Angeles. Out of 70 cheesemakers in Vermont, they count themselves amongst one of the five smallest, making 11,000 to 14,000 pounds of cheese a year.

During grazing season (early May through early November) from Sunday to Friday, Dixon leaves at 6:30 a.m. to drive to Elm Lea Farm, owned by the Putney Farm School, to pick up on average 1,500 pounds of milk a day from the farm’s 20 Holsteins and 15 Jerseys to make into their raw milk cheese.

Full-time Elm Lea Farm manager Peter Stickney is the seventh generation in a line of dairy farmers from Stickney Farm in Rockingham, VT. When Stickney Farm sold off their cows in 1996, Stickney took 15 of their Holsteins with him to Elm Lea Farm to start their herd. Co-manager Phil Ranney is a seventh-generation farmer from Ranney Ridge Farm in Westminster, VT, whose family raised Jerseys until they closed their dairy in 2010. Three other full-time farmers and one intern also work at Elm Lea Farm. In late June, Stickney was out in the fields haying some of the Elm Lea Farm’s 500 acres.

Each Saturday, Dixon’s neighbor, David Major, of Vermont Shepherd Farm, picks up milk from Elm Lea Farm to make his mixed milk cheese. In winter, the milk is picked up by Agri-Mark.

“Peter and David have known each other for 35 years, and made cheese together in the past. David had a hard time getting good milk. You can’t do what we do without getting really good milk,” said Schaal. “It’s magical, taking this beautiful milk and concentrating it down into preserved sunshine.”

Before they met, Dixon worked at Consider Bardwell Farm in Vermont, making cheese out of goat and cow milk. Schaal worked for the Vermont Cheese Council; they met in 2009.

When Consider Bardwell Farm was expanding and making 60,000 pounds of cheese a year, depending on efficiencies, heading toward making 120,000 pounds a year, Dixon had an epiphany. He wanted to get away from the industrial methods that are the hallmark of large-scale cheesemaking.

“Everybody has their own path. At the time, he was 50. His dream was to make cheese the way it was made 100 years ago,” said Schaal. “In the U.S., we are the only ones who are making the cheese that we do and distributing it. The big difference is that we don’t use a commercial starter.” Instead, they use the autochthonous method, using native cultures.

When they started up their business, they asked Stickney and Ranney to chose their eight favorite milking cows from the herd at Elm Lea Farm with the aim to hand-milk four cows, with four for back-up, if necessary. They hand-milked the final four into glass jars and let that milk clabber. They put a little bit of the grandmother from that clabber into the mother culture to make their raw milk cheese, allowing the milk to be the driver of their cheeses’ flavor.

As a small-scale producer, they know that “as you get bigger, you have to go with efficiencies, and that is what becomes important versus allowing the milk to be the driver,” Schaal said. “Commercial starters are very powerful, and make the cheese turn out a certain way.”

This year they were planning to expand and make an extra 2,000 pounds of cheese a year – then COVID-19 happened. Agri-Mark needed a certain quota of milk, and Parish Hill Creamery’s business was down 90%. “Our last big order was the first week of March. Between the first week of March till the end of May, the only thing we sold was individual boxes of cheese. The last couple of weeks we have had orders from all our distributors,” Schaal said. She’s thrilled that their online business and creamery store are picking up. The good thing is that their cheese keeps. They never sell any cheese before it is aged 60 days, and some cheeses, like Vermont Herdsmen and Idyll, are aged three or four years.