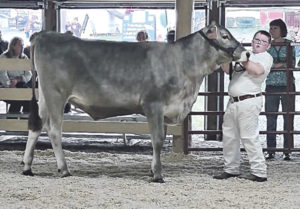 Although he’s just 11 years old and starting sixth grade this autumn, Owen Grefrath of Canandaigua, NY, has a lot on his plate. He had a very busy summer, showing at both the Ontario County Fair and the Great New York State Fair, and he splits his time on the farm between his dairy cattle and his beef cattle.

Owen is the third generation of Hilton Farms. The farm was started in the late 1970s by his grandparents, and today the dairy management team includes Peg and Richard Hilton, their son, Ryan Hilton, their daughter, Lisa Grefrath, her husband, Tom Grefrath – Owen’s parents – and Owen himself. They have about 650 cows, mostly Holsteins and Jerseys, and a handful of Swiss. The cows are housed in a free-stall barn and are milked in a double-10 herringbone parlor. Their milk is shipped via DFA.

Tom said they’ve grown the farm since stepping up into a more managerial position, trying to get more with less. “We’re trying to be more efficient,” he said.

The farm works around 1,200 acres, growing corn, hay and alfalfa, plus about 40 acres of wheat.

Tom said he grew up showing hogs, but had always wanted to do more. “Owen sparked the idea of showing cows, and we think that’s cool,” he said.

“It’s fun to show,” Owen said. “I like going up against other people to see how they compare, to see how their animals compare. I’ve been showing since I was six.”

The beef side of their operation is much smaller and does business under the name Emerdale Farm. This year marked their fourth time at the New York State Fair showing beef, and on this front, Owen is also very competitive, Tom noted.

He’s already looking ahead to the next competition and to one day taking over the farm. “Our goal is to get bigger and better,” he said confidently.