Organic dairyman adapts to his advantage 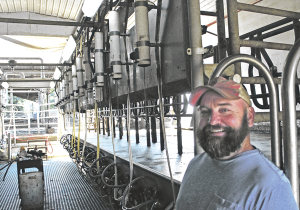 For example, he has adjusted his herd management to take advantage of a premium offered by Organic Valley in the winter. He takes in leaf litter from a local municipality at no cost to make compost as complementary fertilizer to manure and chicken litter. He plants a variety of cold and warm season forages and always plants mixtures in pastures and cover crops. He has become a distributor of cover crops and pasture mixes for Center Seeds.

The first big decision was the switch from conventional to organic dairying.

“I told him it was crazy the first time I heard it,” said his father, Buddy. “But the more we looked at it, the more we realized it was the right thing to do.”

They converted in 2007, beginning with a split herd (starting with heifers), which at the time was permissible under organic standards.

Today, the Hoffners milk between 80 and 140 cows, depending on the season, and organically farm 800 acres, including pasture. The herd is about one-third Jersey and two-thirds Holstein.

Finding and keeping full-time help is difficult due to competition from the booming local construction industry. As a result, Chris and supposed-to-be retired Buddy do much of the farm work themselves. They appreciate the regular part-time help they do have, including local student T.K. Lark.

The Hoffners supply milk to Organic Valley, which pays a $3/cwt premium from December through February. To take advantage of that premium, the Hoffners have scheduled their herd to calve in autumn and winter. They also switch to milking three times a day, rather than two, during those three months.

The cycle works well to harmonize profitability and production, Chris said. “Once we get them bred, they’re back out on grass, and as we start running out of good grass the cows start drying off,” he explained. “We’re grass based. The cows only come up here to eat grain and get milked.”

In the summer, the cows get shade in woodland areas which Chris segregated into paddocks to manage wear. In the winter, there are old barns for cover and sacrifice pastures.

The herd has evolved from all Holstein to today’s mixed-breed herd. Chris likes Jerseys because “they’re more efficient and seem to take the heat better.” The dairy no longer has a 27,000-pound rolling herd average, but the milk does have a good fat and protein content, which Organic Valley also pays for.

The Hoffner farm was established in 1956, when Buddy’s father G.L. bought the land. “It was cheaper for him to buy this land than continue renting the land he was farming,” Chris said.

At first, G.L. installed a single-2 milking parlor, then grew to a double-3. “Milking in that,” Buddy recalled, “the parlor would be used 15 hours a day.”

Eventually they squeezed a double-5 system into the parlor containing the double-3, which cut milking time down to 12 hours a day.

Today the dairy uses double-14 with one curtain wall. When two people milk, it takes just a little over an hour for each milking.

The Hoffners farm a mixture of forages and always use multi-species cover crops. Being organic can have its challenges, however. This past winter was so wet the cover crop didn’t get thick enough to provide an adequate mat for preventing weeds when rolled at planting time, so the Hoffners had to cultivate before growing corn. Under better conditions, they have grown good stands of no-till organic corn.

One advantage the farm has is an established system of underground irrigation lines, installed by Buddy and G.L. years ago. With it and a system of local creeks, they are able to irrigate many crop fields. They are looking to upgrade this winter from an overhead sprinkler to a center pivot system.

Because fertilizing can be a challenge when farming organically, they like to plant nitrogen-fixing legumes – from clover to cowpeas – whenever appropriate. They also like the compost they make from leaves delivered by a local municipality. This year for the first time they also used foliar fertilizer.

Though their farming schedule is complex and has a lot of variability, a “typical” rotation for the Hoffners is three years of alfalfa – harvested both mechanically and when possible by grazing – followed by no-till corn, small grain for baleage or sileage, then sorghum for forage or grain.

When they are harvesting grain (whether corn, barley or sorghum) they sometimes take it in wet and dry it with a roaster.

Sugarcane aphids have been a pest on the Hoffners’ farm, particularly going after Sudex and forage sorghum. Chris found that planting companion species – such as a mixture of sunflowers, sun hemp, buckwheat and cowpeas – at the edge of fields and in strips through the field promote ladybugs and other beneficial insects which control the aphids. At harvest, they chop those companion species together with the primary forage.