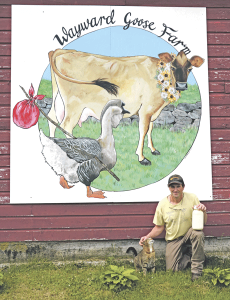 Wayward Goose Farm is set on a bucolic hill where an African goose went wandering in search of its mate.

“The former owner owned two African grey geese. When its mate died, this 20-year-old African grey goose – blind, deaf and lonely – wandered over to the farm next door,” said Laurie Brooks, who owns Wayward Goose Farm with her husband. The farm next door, 500 yards away, was Consider Bardwell Farm, where their daughter Margot worked in the creamery. Margot sought the owner of the goose. When she finally found him, it turned out he wanted to move to Florida to care for his mother.

Serendipitously, at the time, Laurie and her husband Dan, a fifth-generation dairy farmer who were living in upstate New York and working on Dan’s family’s dairy, also wanted to move and were in the market for a farm. The goose’s owner gladly sold the Brooks’ his West Pawlet, VT, property, which came with a house and an old dairy barn full to the rafters with junk. “All because of that goose wandering over there,” said Laurie. His name was Oscar, and if this was a movie, he would win an Oscar for his starring role.

The Brooks’ sold their share in Dan’s family’s dairy to facilitate the purchase and renovations, and all his years of learning and dairy experience came with them when they bought the 50-acre farm, half of which is woodland, in 2011.

Consider Bardwell Farm needed a milk supplier because they were buying milk from a Chester, VT, farmer, an hour and a half away. The Brooks’ had a ready and immediate market for the milk produced by their Jerseys, once they obtained them. To house them, “we sunk our money into cleaning out the 200-year-old barn, totally reconfiguring it. It hadn’t been used for anything but storing junk, literally, top to bottom,” said Laurie.

They built a four-cow step-through milking parlor. Cows exit into the outside barnyard. They are only secured while being milked. They are free to go in and out at will all winter.

Just as they finished the barn, they found and bought 15 cows out of a prime, registered Jersey herd that was being dispersed in Leicester, VT. Eight years later, “We’re still milking five or six of them, and their daughters,” said Laurie.

They are at their capacity of milking 30 cows. “The heifer ‘rearer’ who raised our replacement heifers became ill, and he had to bring all of our heifers of various ages back. It’s way more than we need at the moment,” said Laurie.

“One of our biggest challenges is that our cows are very long lived. We have 12- to 13-year- old cows that are still healthy and productive and good milkers. We are struggling right now with making culling decisions,” she continued. Milkers are usually culled at five or six.

They also have three Jersey/Montbeliarde crosses. Montbeliardes are a hardy red and white French breed that produces milk high in fat and protein, perfect for cheese. They also have a Jersey/Canadienne cross. Canadiennes are first on the Livestock Conservancy’s priority list of cattle.

When the cows do age out, their meat is sold at their farm store.

In order to make their high quality raw milk cheeses, Consider Bardwell Farm requires Wayward Goose’s cows’ diets to be free from any fermented feeds. This means no silage or haylage. The bulk of their diet is from grazing in the spring, summer and autumn and dry hay throughout the winter, supplemented with grain as needed.

Consider Bardwell Farm, in addition to being a farmstead creamery, is also a goat dairy. Goats are susceptible to certain parasites and to offset this they should not graze on the same section of pasture for 60 days. Goats are also browsers, preferring the tops of grasses. Wayward Goose Farm cows co-graze on Consider Bardwell’s pastures, once the goats have been through them, first giving the pastures a rest period. Since cows are grazers and not browsers, and they aren’t susceptible to the same parasite issues as goats, they can safely graze areas soon after the goats. This eliminates the need for mechanical pasture trimming and encourages more plant diversity in the pastures while keeping the parasite issue under control in a natural manner.

“By grazing this way, Consider Bardwell pretty much eliminated the need for treating their goats for parasites,” said Laurie. Her and Dan’s son, Peter Brooks, worked out this rotational grazing system during his five years as the farm manager for Consider Bardwell Farm. The Brooks have two other children.

Both farms earned the title of Sustainable Farm of the Year in 2013. Managers of both farms are concerned with soil health and pasture health.

Speaking from the perspective of someone who formerly milked a large dairy herd of Holsteins, “We like the small scale, not having too much machinery, being so tied to the final product, knowing exactly where it goes – it doesn’t go on a truck with milk from 15 other farms. We have pride in the product that our milk is going into. It feels good,” said Dan.

Because they don’t plant and harvest corn for silage they use less machinery. They have a manure spreader and a skid steer. He uses Consider Bardwell Farm’s haying equipment, and oversees their yearly haying operation, for which he receives a share.

The Brooks’ welcome visitors who can buy raw milk and other local products from area farms at their self-serve farm store. They can also view twice daily milking from the store windows, which overlook the milking parlor. The couple feels they are providing a much-needed link between consumers and their food. They also have a successful listing on Airbnb and have hosted folks from around the world for the past seven years, giving them a chance to experience small scale, sustainable dairy farming firsthand.