One day at a time at Lund Angus 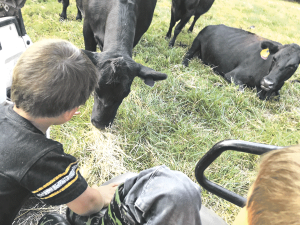 Just a stone’s throw from where men lay down their rifles at the end of the War Between the States, two former New Yorkers put down roots in 1981 and founded a Black Angus farm.

A native of the Catskills region, Dick Lund and his wife and business partner, Mary, settled in historic Appomattox County, where over the years they worked in tandem to build one of central Virginia’s top grass-fed beef operations.

The project included 11,000 feet of stream exclusion and cross fencing, 6,000 feet of pipeline, eight watering stations and one new well to serve them. In recognition of their efforts, Dick and Mary received a 2017 Clean Water Farm Award from the Roanoke River Basin Association.

With retail outlets for their beef stationed throughout the commonwealth, the Lunds presided for a number of years over a prosperous and fulfilling enterprise. But come June 2020, with COVID-19 killing thousands and wildfires blackening the American West, cancer claimed Mary. They’d been together for 53 years.

Dick, the father of two grown sons and now a grandfather, carries on as best he can, escaping for respite to Virginia Beach, where he’s come every year for the last 27 – only this year, it’s without Mary. It’s difficult, he explained. But he decided to sojourn to the coast, a two-hour drive from the farm, where salt water, the cry of seagulls, the roar of the surf and sunshine have soothed grieving souls for millennia.

“My wife was the brains behind the farm… I supplied the labor,” said Dick, a who departed General Electric in 1981 as an engineer before climbing atop a tractor and launching a second career as a beef producer. Today, he carries on with the help of son Jason, a graphic artist and marketing manager. His other son, Jeffrey, lives in nearby Richmond.

“Hopefully, one of the grandchildren will carry on the farm,” Dick said. His grandmother had a farm in the Catskills. The family became acquainted with central Virginia through a job transfer to Lynchburg back in 1981.

“We were avid backpackers and had gone to the Rocky Mountains, where we lived off the land, fishing, and were self-reliant,” recalled Dick. “We decided we’d like to have a farm.”

From the beginning, the Lunds sought to produce the best stock for their customers. Market animals, which are harvested at two years of age, are grass finished, according to Dick. All calves are born on the 200-acre farm near the village of Spout Spring. They come from 20-plus generations of BQA-certified purebred Black Angus that interact with humans on a daily basis. Meticulous records are kept on each animal in the herd.

Mary connected with experts at Virginia Tech and Purdue, and with their guidance, the couple devised a system of 52 paddocks for their cattle to better manage their resources and land/cattle ratio. They sunk a new well, which is connected to eight different waterers throughout the system. The paddock rotation systems allows the grass time to rest, the soil is improved and the grass recovers faster, giving an effective 20% additional pasture without buying more land. No pesticides are used on the land, and a Virginia State Nutrient Management Plan is followed, in addition to yearly soil sampling to ensure the appropriate amount of fertilizer and lime is applied for optimal growth results.

“It works well, but it would have been expensive without government help [cost-sharing],” said Dick. A government grant, through the local S&WCD, paid for the waterers and cross fencing.

With resource conservation in mind, the Lunds planted 200 mixed hardwood trees and took some land out of production to serve as pollinator habitat. These areas have water, shrubs, grasses, trees and wildflowers to support deer, foxes, turkey, rabbits, hawks and owls. These habitats encourage an increase in quail, bee and butterfly populations.

Over the years, the couple shared their experiences and knowledge with other beef producers through workshops on the farm. These events featured an overview of their forage and livestock production system, and a number of forage, ruminant and grassland specialists.

Both trained in AI through Select Sires at the Lynchburg Livestock Market, the Lunds aimed for docility, marbling, good milk production and growth in their animals. They sold – and Dick continues to sell – their beef directly to customers and through retail grocers in the region.

The COVID-19 pandemic presented a mixed bag of challenges, as well as a boon to beef sales caused by temporary packing house closures and supply chain disruptions, according to Dick.

“When it became harder to find meat at some locations, my wife’s spring beef sales skyrocketed,” he said. “We had to turn away customers. COVID locked up slaughter house capacity. So we had to use a packing house over an hour away.”

His plans for the future, without Mary, his wife, steadfast partner and guiding light by his side? “I plan to keep on going, a day at a time,” Dick said.