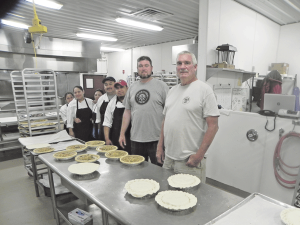 PRINCETON, NJ – We know all farmers work hard – yet it seems poultry and dairy farmers work the hardest. Fortunately for those who seek fresh and local in central New Jersey, the old-fashioned American work ethic is alive and well at Griggstown Farm. Beginning as the Griggstown Quail Farm in 1975, George Rude and his family have seen their business grow steadily to its current bustling state, serving retail customers, a number of New Jersey and New York City restaurants and a number of nearby farmers markets each week.

Due to customer demand, their retail farm stand, launched in 2002, is closed only on Thanksgiving, Christmas and New Year’s Day. There’s always some kind of operation going on in their commercial kitchen or slaughterhouse facility.

The Griggstown Farm Market was founded by George Rude Sr. He worked in landscaping and construction prior to purchasing parcels of land in the 1980s to create this farm operation.

“I’ve always been a hunter, and initially I just did quail. That’s why I called it Griggstown Quail Farm,” Rude Sr. said in an office he shares with his son, George Jr. Their 68 acres, bought piecemeal throughout the years, was officially preserved under New Jersey Farmland Preservation Program guidelines in 2009.

While the specialty here used to be quail, more recently it’s become poussins – young chickens – for a range of retail and restaurant customers. But Griggstown Farm Market offers a bit of everything: chicken, beef, shepherd’s pies and a range of other value-added foods.

Aside from their poussins, they raise quail, turkey, chickens, pheasant and guinea hens. They process several thousand of these birds each season in their USDA-inspected slaughter facility.

“We don’t do cattle anymore. It was just too much hassle. It’s not worth it,” the elder Rude explained. “We just do poultry, and the vegetables we raise are not a wholesale job. They’re just for our farm store.”

One major investment was the farm’s 5,000-square-foot certified commercial kitchen, built in 2012. “We do numerous chicken pot pies and beef pot pies every week, and our lines of sausage we wholesale to other farmers markets,” Rude Sr. said.

Rude Jr. chimed in that “the market doesn’t sell nearly as much to Whole Foods as we used to, but now we sell a lot to King’s, McCaffrey’s and Wegman’s as well” (McCaffrey’s being a smaller high-end retail supermarket).

“The hardest part is manning the kitchen,” he confided. “Farming around here is a challenge now.” In spite of offering wages that are above New Jersey’s minimum wage, they admit they occasionally have trouble keeping the roughly 25 employees they need at the farm operation, the commercial kitchen and the retail farm stand.

Rude Jr. is wholesale manager, overseeing between 60 and 70 accounts while simultaneously raising turkeys and chickens and vegetables and checking in periodically to the slaughterhouse and kitchen. “It’s seven days a week,” Rude Jr. said.

The busiest time of year are the months leading up to Thanksgiving and the December holidays.

“From September to Thanksgiving we get really busy with fundraisers – we do about 45 fundraisers,” Rude Jr. said, for schools, churches and other charitable organizations. The Griggstown Market will sell these groups savory or fruit pies at reduced cost so they can raise money.

Aside from their livestock offerings, the Rudes also grow a range of vegetables and fruits including tomatoes, peppers, strawberries, eggplant, pumpkins, watermelon and sunflowers. “We have all the equipment and we’ve got the extra land,” Rude Sr. said. “That’s the bottom line. We had no intention of making money on vegetables and I still don’t know how you do it. Our specialty is poultry. If I don’t plant that stuff, what am I going to do – cut the grass? Whatever we get, we get. The equipment is paid for, and it doesn’t cost us a lot to grow them.” The vegetables have proven to be an additional draw for patrons of the store.

“Our hope is if people are coming in to buy tomatoes, they’ll also buy some frozen or fresh chickens or some pot pies,” Rude Sr. said. Aside from frozen and fresh turkeys, chickens and other poultry in their store, the Rudes also sell homemade soups, chili and sauces as well as a variety of jams and jellies. 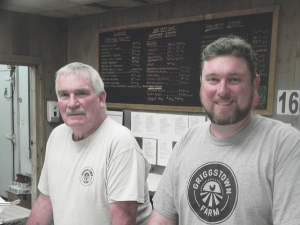 “They [the USDA inspectors] come and inspect all products in our kitchen facility and also in our slaughter facility,” Rude Jr. explained. The local Board of Health visits twice a year to check the sanitary conditions in their retail store.

The Rudes expanded their value-added product lines through trial and error, according to Rude Sr. “Everything in farming is trial and error. There are foods that phase out over time … things change. We used to do 30,000 pheasants a year. Now, we only do about 7,500. Pheasants are going the other way, for whatever reasons. The chefs would rather have chickens, and chickens are the hottest thing right now for us,” he said. “There isn’t anybody out there that can have a fresher local chicken than ours. We do all our own raising, all our own slaughtering and all our own deliveries.”

Many Griggstown Farm poussins and full-grown chickens go to a distributor in Jersey City. From there, so close to Newark Airport, they can ship them same day to locations all over the world.

They noted properly raised poussins “need to be 21 to 23 days old,” Rude Sr. said. “After that, they’re too big, so you need your own processing plant. You just couldn’t afford to ship them out elsewhere and have them slaughtered.” He added that the USDA became involved with the slaughterhouse operations when they first started offering their own full-sized chicken pot pies at the retail market in 1999.

Asked what their biggest on-going problem was managing an operation that raises so many types of poultry as well as vegetables – and the added business of running a small supermarket at their farm stand – both Rudes stated, “Labor. Nobody wants to work on a farm. It’s hard physical work and labor is the key issue at every farm.” They said regulatory issues and dealing with all the compliance paperwork in a fast and efficient manner is problem number two.

“They’re willing to pay more for quality, and that’s true for any product,” Rude Sr. said, noting they worked closely with a baker for several years to come up with the specific recipes for the meat pies they sell.

“Any farm market there is in New Jersey, it’s all about local. If you’re going to a local farm market, you don’t go there with the idea that it’s necessarily going to be cheaper. You go there because it’s fresher and it comes right off the farm,” Rude Sr. said.