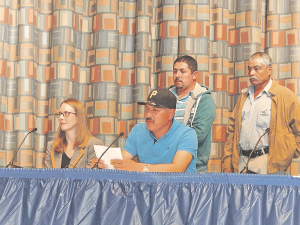 Ramos, Senate Labor Committee chair, sponsored the controversial proposed bill S.2837/A.2750, which, among other things, calls for farmworkers to receive mandated eight-hour work days, 40-hour work weeks, overtime rates at 1.5 times the normal rate and allows farmworkers the right to organize and possibly go on strike at any given time.

Metzger, chair of the Senate Agriculture Committee, opened the hearing with introductions and remarked it was “vital to receive direct input from farmers, farmworkers and the public about this important legislation.”

A handful of speakers, including former farmworker Crispin Hernandez, spoke in favor of the legislation. Hernandez, who presented his case through a translator, is suing New York State and the Farm Bureau. He said he was injured on the farm he worked for and was not treated fairly. He also claimed he was fired for attempting to organize his co-workers to speak out and rebel against the farm.

Speaker Art Gladstone, retired Farm Labor Specialist, New York State Department of Labor, commented that this type of legislation should be a responsibility of the federal government, not the state. Several speakers echoed this thought.

One speaker said many farmworkers are underage and many die as a result of farm accidents.

Senators Ray and Metzger questioned the sources of her information.

Early during the hearing, Latinx farmworkers from various farms testified that not only are they paid well – with wages above minimum wage, free housing, internet, health benefits, paid vacations and other benefits – but they have even been able to put their children through college. Some said they are treated like they were part of the family – or even better.

Most farms reported having had the same workers return from the H-2A program repeatedly. Anthony Emmi of Emmi & Sons Inc., a third-generation 300-acre fruit and vegetable farm in Onondaga County, testified that he hires about 25 H-2A workers each year.

Emmi, along with other farmers who testified, said his farmworkers come to his farm to work as many hours as possible in the shortest period of time. If hours are cut, due to new mandates, his workers will go to other states where these laws do not apply.

“Each year we absorb increases in wages, taxes and regulatory costs,” Emmi testified. “I have cut my labor almost in half while trying to maintain sales. Crop prices have been flat for years and it is difficult to compete with countries and states with lower production costs. With labor costs approaching 50% of our net farm income, we will be unable to sustain the way we farm.”

Emmi also remarked that with perishable crops and a short window to harvest, a strike would be financially devastating.

Northern Orchard owner Jesse Mulbury testified that their 110-year-old orchard business in Clinton County would be unsustainable if the proposed legislation was put into law.

Matthew Critz of Critz Farm in Madison County testified that his first-generation farm has seen H-2A farmworkers returning repeatedly for 10 years. They receive free benefits in addition to above-minimum wages.

Michael McMahon of EZ Acres, a Cortland County dairy, said, “Farm Net estimates that the overtime requirements will lead to a loss of 20 to 25% of New York’s family farms in the first year alone. As the chairman of the Cortland County Industrial Agency, I can tell you with all certainty that the exodus of farms would have a devastating effect on our rural 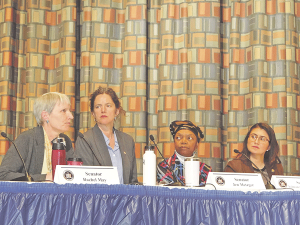 Time restrictions in the later afternoon prevented farmworkers slated to testify against the new legislation from speaking. However, their supportive presence alongside of farm owners spoke volumes.

“This bill would have a crippling domino effect on our upstate economy,” testified Jason Turek, partner in Turek Farms of Cayuga County, a family-owned vegetable operation that has been in existence for over 75 years. He explained to the senators, as other farmers did, that weather conditions dictate when planting and harvesting are done. As time is of essence on these farms, workdays frequently last longer than eight hours. However, when there are days of heavy rains, workers rest or do as they please.

“Farmers in New York face a number of unpredictable challenges, including unpredictable weather and long working hours,” testified Phil Hall, partner in Schum-Acres Dairy Ops LLC of Ontario County. “For dairy farms that make up the largest proportion of the state’s overall agricultural production, declining milk prices have cut revenues sharply, in some cases threatening family businesses.” Hall went on to list how tariffs, policies for migrant worker visas and other recent restrictions have obstructed farms in New York – and nationwide.

Hall said agriculture cannot be compared to other industries because it operates under a “unique set of rules.”

“Agriculture provides the workforce of New York with opportunities that other industries cannot provide,” Hall commented. “If a worker enters into agriculture and decides that the opportunities it provides will not satisfy their goals, then that worker has the freedom to choose another career opportunity. Government intervention is neither required nor desired.”

Hall pointed out that Ramos, who arrived late to the hearing, had made a “racially inflammatory statement” that was “an uninformed and ignorant opinion.” (Ramos has been quoted saying, “In New York, there is a Jim Crow-era law still on our books that denies human beings – mostly black and Latino taxpaying New Yorkers – parity with nearly every other worker in this state.”)

In reply to her statement, Hall remarked, “From the language that Senator Ramos has used in promoting Bill S.2837, I stand here as a farmer accused of racism and inhumane and unjust treatment of my employees – an accusation with which I disagree.”

Hall attempted to provide details of a report from Forbes.com listing New York as having questionably reported financial data, but was cut short when informed by Ramos that his speaking time was over.

At the conclusion of the hearing, Senator Montgomery stated, “This is very important and I want to caution this whole notion that this is a ‘Jim Crow’ moment. I grew up in the south, and I know Jim Crow, and this ain’t Jim Crow.” At her comment, the crowd burst into applause.

New York Farm Bureau reported that enactment of this legislature would increase labor costs on New York farms by 17%, or nearly $300 million.