Not just for the holiday birds 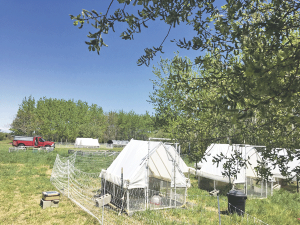 Turkey may be the meat of Thanksgiving, but for some it’s the meat of Christmas and New Year’s Day, too. For others, a goose, duck, or Cornish game hen – or maybe something more “exotic” such as quail or partridge – might grace the holiday dinner table. Here’s a look at some of those birds which provide sustenance for our holiday tables, from the perspective of a farmer who raises them.

Feisty Acres, located on Long Island, NY, has grown rapidly from its inception to accommodate an overwhelmingly positive response which city dwellers are having towards their birds. And it’s not just the heritage turkey or chicken in demand. The farm, owned by partners Abra Morawiec and Chirs Pinto had its start in 1995, with 200 Japanese quail. Today, it’s outgrown its initial parcel of rented land, and now calls eight acres, which they rent from a land trust, home. They are already looking for additional land for the future.

Raising heritage breed turkey is a different beast than raising Broad Breasted White or Bronze birds, which have been selected for rapid growth, oversized breast meat and non-forage based production. While many farmers do pasture these conventional birds, heritage breeds of turkey don’t act like the modernized versions, and have different needs.

The heritage birds can actually mate naturally. They have a more flavorful taste. They are feisty and playful, and have hardier, more disease-resistant makeups, and they do take longer to finish to market weight. Morawiec doesn’t view any of these traits as a negative.

“I do believe that the birds we raise are bred to be better foragers,” she said of the heritage turkeys. “We have purposefully chosen certain breeds and species to best suit our pasture based farm business.”

At Feisty Acres, the turkeys begin life in the brooder, and are moved to pasture at four weeks old. A covered structure with an open bottom is their first introduction to foraging, protecting them from hawks and preventing them from escaping from the electrified netting, which they could slip through.

Once they are larger, flight feathers are trimmed, and they’re free to roam outside of the shelters and around their half-acre paddocks. They are given pasture as well as areas of underbrush, where they are free to roost and find shady areas to rest, and to enjoy foraging in the understory. Turkeys don’t mind taller forages, and along with the farm’s guinea fowl, are proficient and voracious foragers. Turkeys train easily to the electric netting, so they don’t fly away even though their flight feathers are only trimmed twice in their lifespan.

“As long as there is ample grain, water and places to explore, the turkeys won’t stray outside of their paddock,” Morawiec said. “They’ll definitely roost in trees, though, if given the opportunity. Or even on top of their house, which doesn’t end well for the house.”

Marketing the turkeys – which are only raised for a Thanksgiving season slaughter – is easy. They process around 100 birds, and the demand is definitely there in the New York City market which they serve. The turkeys are sold pre-order, beginning a few months ahead of processing. While they sell at weekly farmers markets in NYC, many of their birds of all feathers, not just turkey, are sold by pre-order. Feisty Acres also sells its meat, eggs and value-added products via a variety of CSA shares, too. They routinely sell out quickly.

While turkey is big news for the Thanksgiving holiday, other fowl raised at Feisty Acres have been known to grace a holiday table or two. The farm doesn’t currently process any birds in the winter, as they use a mobile processing unit owned by another operation, and it isn’t operational in cold weather. They are working to establish their own 5-A NY State processing facility which would allow them to process up to 20,000 birds per year for themselves and other farms, and do so all year. They currently process about 2,500 birds in total each season, but sell out by early December.

Aside from the 100 turkeys for the Thanksgiving market, they process more than 150 partridge, about 300 Silkie breed of chicken, 150 Chukar partridge, 250 guinea fowl and 2,000 quail. They also raise quail for eggs, keeping about 400 egg layers in production year round. Guinea fowl eggs are also available. Heritage ducks, both Indian Runners and Cayuga breeds, were a new addition to the farm this year. Duck eggs are available year round. They make value-added pickled quail eggs in a commercial kitchen facility, and offer other products such as chicken or guinea fowl stock. 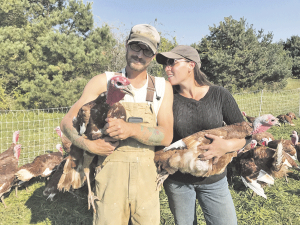 All of the bird species are pasture raised, but have unique nutritional and housing needs of their own. They raise 50-100 chicken and guinea fowl per group, raising multiple groups per year. Chukar partridge breed only from May until July, so they are all raised at one time, as are the turkeys. They currently only slaughter May though December, typically 100-200 birds per week.

Housing needs on pasture varies depending on species, but each species has its own distinct requirements. Guinea fowl are easily panicked, and apt to fly up into trees or smother one another in fright. They are contained in a structure with a sturdy roof at night. Portable coops allow them to be moved to fresh pasture daily, a necessity as these birds are “ravenous eaters of pasture grasses and vegetation,” Morawiec explained.

Quail require open bottomed pens, with roll up sides and high ceilings so they can fly up. Houses are moved every few days to fresh pasture, both to provide fresh forage and to avoid manure accumulation within the coop. If quail escape, they are easy prey for coyotes and hawks, and are difficult to recapture as they can fly several hundred feet before needing to land, and are small and nervous.

“Because our birds don’t grow at unnatural speeds, we can gauge our market performance and provide fresh product accordingly without worrying about how big our birds get because they grow slowly,” Morawiec said.

The busiest time of the year is August, when 800 birds combined are in brooders, and another 800 total across all species being raised are on pasture, all in various stages of growth.

The slower growth rate of the birds allows them to be raised in the natural environment, foraging but also being supplemented with vegetable scraps and grains. Depending on the species, the protein content varies from 19 to 26%. Along with different nutritional needs, the consumption of pasture forages changes with the seasons, and the amount of supplemental feed needed varies per species and season.

At Feisty Acres, the pastures are diverse, with a naturally-occurring mix of native plants and grasses, including switch grass, deer tongue grass and purple top grass. The weeds, normally viewed as a problem, have proven to be an asset — or at least most of them have. The poisonous Dogsbane is avoided by all of the birds, and is mowed down prior to going to seed. But other weeds, such as the rampant poison ivy vine, are enjoyed by all of the bird species, which they can eat with no ill effect. Mugwort is a favorite of the Silkies.

“The vegetation that’s here is conducive to the birds we have as they are all well-versed foragers. Our unique pasture also lends our birds a flavor that is unmatched,” Morawiec said. “When your poultry and game birds have access to a wide range of food stuffs, their meat and eggs are going to be superior.”