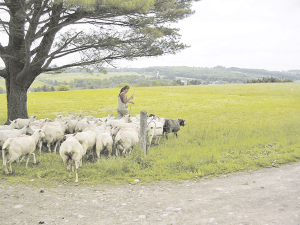 Years ago, a nine-year-old girl went on a family trip to Ireland. Little did she know the profound effect it would have on her life.

“It was on that trip, in the heart of Ireland, that I first saw a cow being milked,” said Maryrose Livingston. “The only word I can use to describe how that made me feel was enchanted.”

That experience led her to her role today as the owner and operator of Northland Sheep Dairy Farm, located in Marathon, NY.

The team that owns and runs Northland is made up of Livingston and partner Donn Hewes. Originally from Detroit, MI, Livingston studied dairy science at Michigan State University and agricultural policy at Evergreen State College in Olympia, WA. Livingston is the shepherd and cheesemaker while Hewes is in charge of the farm’s horses and mules.

Livingston jokes that she took a rather indirect route in deciding to raise sheep. After that childhood visit to Ireland, her heart was set on working with dairy cows. Fast forward a few years, and the pair traveled to Europe on a cheesemaking research expedition. It was on a farm in Timsbury, England, that Livingston had her first experience at a sheep dairy. She spent two months there. By the end of that trip, Livingston’s passion for farming was as strong as ever, but it had a new focus. Now committed to running a sheep dairy, she returned to New York to prepare and pursue that prospect.

Livingston and Hewes worked at the sheep dairy of Karl and Jane North for five years, learning the ins and outs of the business. The Norths had been operating their farm since 1987. In 2002, at the end of their tenure at the farm, the Norths decided to retire. Livingston and Hewes bought the property.

“We have just over 57 acres,” Livingston explained, “but we lease an additional 87 acres.” Northland’s herd of sheep consistently hovers around 35 ewes. “About two-thirds of our sales comes from our sheep’s milk cheese. The other third is brought in from our mutton sales.” 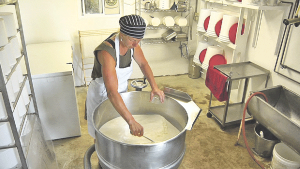 Livingston continued, “Our sheep cheese is made with raw milk produced by our own grass-fed flock. We milk the sheep twice daily throughout most of the season, and make cheese until the animals are dried off in late October. We make cheese approximately every other day throughout the season, and our cheeses are aged in our cheese cave for four months to two years, where they develop natural rinds.”

Northland’s mutton is processed by a USDA-certified organic butcher. Livingston said, “We take great care to ensure that the animals are handled and processed humanely with no stress. Our meats are dry-aged for maximum tenderness and flavor.” Northland’s mutton is distributed throughout New York and into Pennsylvania. Individual customers are guaranteed 35 pounds of meat with their order.

Northland also sells washable sheepskins from its flock in a variety of sizes. According to Livingston, customers have used them for baby blankets, pet beds, chair covers, rugs and yoga mats.

Do Livingston and Hewes have any staff to help them keep up with the workload? “Not exactly staff,” she laughed. Eschewing modern mechanization, Northland takes a more old school approach and employs seven horses and one mule. Hewes is in charge of the draft horse team, which is used to perform a variety of tasks on the farm, from plowing snow in the winter to making hay for the sheep flock in the summer. Hewes has over two decades of experience in working with and training horses and mules. He recently has started a school on the farm to teach new teamsters.

Livingston is proud to point out, “We’re certified organic and certified grass-fed by the Northeast Organic Farming Association of New York (NOFA-NY.)” Livingston currently serves as the vice president of the Board of Directors of NOFA-NY, and as a member of the Governing Board of the Organic Farmers Association. 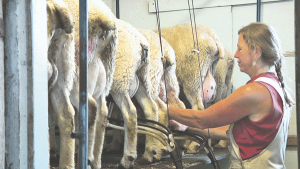 Livingston is committed to helping other aspirant farmers find their footing. She and Hewes hosted another farming pair, Aubrey Schatz and Scott Hoffman, who worked with them at Northland while learning the business much in the same way that Livingston and Hewes had worked with the Norths years ago. When they were ready, Schatz and Hoffman struck out on their own and opened their own venture, the Family Cow Farmstand, in Hinesburg, VT.

Sanguine about the future, Livingston mused, “We’re not old, but we’re getting older. And when the time comes, I would really like to see Northland continue beyond us.”