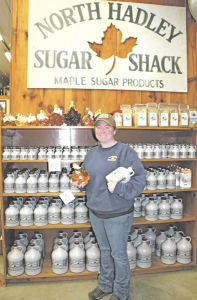 by Laura Rodley
Farmers are used to being tossed around by Mother Nature, with snowstorms, freezing temperatures, thunderstorms and freak tornadoes – or variable temperatures that started this year’s sugaring season sooner than usual in February, and ended early in March. For maple syrup producers, their yield is entirely dependent on Mother Nature and being ready to keep up with her.
The sugaring season just ended for Shelly and Joe Boisvert, who are celebrating their business, North Hadley Sugar Shack’s, 25th anniversary. Their 5,000 taps yielded 1,800 gallons of syrup, slightly below their usual 2,000- to 2,500-gallon yield. About 1,200 to 1,500 of those taps are buckets in Hadley, and the rest are part of a pipeline in Buckland, MA, on leased land. Their sugar shack that seats about 70 people opened for the season on Feb. 15 and was in full swing, serving breakfasts daily, set to serve breakfast through the second Sunday in April as was their sugar season tradition. Their boiling room sits right beside the restaurant. The 2019 Valley Advocate’s Reader’s Poll listed them as the best sugar shack in the valley, a title they have earned many times over the years.
So, when it was announced on Sunday, March 15, that all local restaurants had to close by midnight on Monday, March 16 to assist in curbing the spread of the coronavirus, they immediately closed their restaurant. When the Town of Hadley’s Board of Health official called on Monday to make sure they knew the news, they were already making alternative plans.
They had their year-round farm market, deli and bakery in place for the last seven years, serving sandwiches and selling pork, beef and chicken raised at their 80-acre Sunny Brook Farm, syrup, kettle corn, maple soft serve ice cream and other local farmers wares, produce and bottled dressings.
By that Tuesday, they were offering curbside service for those who wanted it so people could comply with the CDC’s recommendations of social distancing of six feet, and avoiding crowds of 10 or more people. Customers called ahead to order and their orders were brought out to their cars, paid for with credit cards.
“We’re doing things a little differently,” said Boisvert.
Part of their market’s offerings were homemade soups and Diemand Farm turkey pies-to-go. By Wednesday, they added suppers made to go for takeout. “That’s new. Today we have quiche, so it will be quiche to go for supper,” said Boisvert.
At lunch time five days after the edict, there was a steady flow of road workers, local police and regulars who depend on them, and that has continued.
About 10 years ago, the couple started raising beef and pork for themselves, raising six to 10 pigs at a time, and keeping a herd of 25 Herefords for beef. “We decided to raise them for our local people who are coming in,” Boisvert said, and they now have a standing freezer full of meat for sale. They have 10 employees, some part-time. They plan to keep on going, just like many farmers when faced with challenges out of their control. Mother Nature has taught them to be ready.
For more information, visit www.northhadleysugarshack.com.