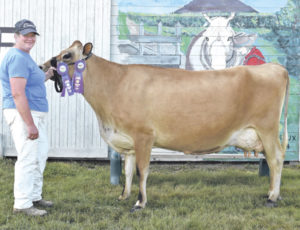 STRATFORD, NH – Heidi and Scott Mason of Northwinds Farm sold all 113 of their herd of Registered Jersey cows last month to Josh Poulin of Newport, VT. Poulin had his newly-purchased cows picked up on Jan. 28 to be hauled to his farm in the Northeast Kingdom. He in turn sold some to a New York State dairy farm.

Poulin has also bought 90 dairy heifers that the Masons are continuing to raise for a while longer in their heifer barn.

It was about a year ago that the Northeast Division of the national cooperative to which the Masons belong (the Dairy Farmers of America) started talking seriously about adopting a quota system based on the number of pounds of milk shipped as a way to reduce supply, Scott explained.

When the COVID-19 outbreak turned into a pandemic, the DFA Northeast board voted to impose a quota based on how many pounds of milk each of its family farm members had shipped during March 2020. The board used a single month rather than choosing to use an average of six or even 12 months.

“For us here at Northwinds, March was a low-production month; we just weren’t milking as many cows as usual,” he lamented. “We happened to have more dry cows, and so we ended up with a low monthly quota – 5,891 pounds of milk per day.”

Lockdowns, including school and restaurant closings, meant that too much milk was being processed and then not sold; some farms ended up dumping raw milk. Dairy farmers culled some cows. Some farmers fed their cows less grain and/or dried them off early to scale back production.

Under these early DFA rules, dairy farmers could buy or sell their cows and their quota. In areas where farmers could find a new milk market, they could sell their DFA quota, quit the co-op and move to a new market.

“But in northern New Hampshire, there are only two milk markets, both cooperatives – DFA and Agri-Mart – and neither is accepting new members,” Scott said.

In November, DFA changed its policy, however, announcing that on Jan. 25, 2021, farmers would no longer be able to buy or sell quotas. Until that date, it was either sell all or sell none.

“That meant our quota ownership would disappear on January 25,” Scott explained. “DFA also required that we had to sell our entire quota, not just part of it. Without another outlet for our milk, we only had two choices: sell out or stay in. This forced our hand. Not knowing and not having any control on how long the DFA quota would be in effect, we decided to sell out.

“We’d been mulling over reducing our dairy herd for some time while we continued to increase our beef production, including Jersey-Wagyu crosses – a very sought after, high-value Japanese breed. Right now, we’re raising 60 beef cattle,” he continued.

“A couple of years ago, we looked into selling our herd of 135 cows, but the price wasn’t right at the time,” Scott recalled. “Then, when DFA announced its rule change in November, we got an unsolicited offer for our whole herd. That made Heidi and me realize that this was an opportunity that might not come our way again, and we decided to make some calls. Quite quickly, we had two very good bids on the table from farmers who wanted to buy all our Jerseys and our quota. It all happened very fast!”

There were a number of other factors the couple also took into account when making this difficult decision. None of their three adult children plan to return to the farm.

Northwinds’ milking parlor was slated for replacement, and, since both are in their mid-50s, Heidi and Scott had begun to realize they needed to plan for their eventual retirement.

After the cows left their farm, their daily rhythm – the sounds of milking and their regular feeding and cleanup schedules – left the couple somewhat disoriented. “We almost didn’t realize anymore that it was the cows – the herd – that set the pace and governed our lives,” Heidi said.

Heidi Sawyer grew up on Crescent Farm, a Jersey dairy farm in Walpole, NH, that her brother “Tom” Sawyer now operates. She and Scott met at UNH, from which they both graduated in 1988, each with a BS in animal science.

The only time Heidi has ever lived away from Jersey cows is when they lived in Woodsville, NH, while Scott worked as an FmHA loan officer for USDA. From 1988 to 1994 Scott worked as a dairy herdsman at Crescent Farm.

The couple and their children moved to Stratford in 1994, where they operated and expanded Northwinds. From 2011 to 2018, Scott worked off the farm as a community and government relations consultant for Elevare Communications in Concord. When that project ended, he resumed full-time work at Northwinds, where he and Heidi farm about 400 tillable acres in Coös County, 235 of which they own in the fertile Connecticut River Valley.

Then, on Aug. 5, 2020, Gov. Chris Sununu swore Scott in as the new executive director of the State Fish and Game Department, once again reducing his time on the farm. “I’m very engaged in this job and enjoying its many diverse facets,” he said.

Now Heidi and Scott are still in the process of deciding exactly how they’ll manage Northwinds. They anticipate expanding their beef herd and at least maintaining their flock of 12 ewes and a ram, plus growing vegetables, including fresh corn, and forage crops.