No hasty transformations at Hastings Farm 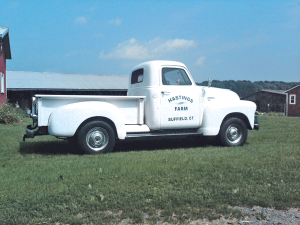 Reflecting the changes in farming practices from those firmly rooted in the 19th century to the cutting edge technology of 21st, Hastings Farm has served as the model of New England-style farming for over a century.

The farm was founded in 1916 by family patriarch Howard Hastings. Like so many other farms in the Connecticut River Valley, Hastings Farm originally made its money in tobacco. While prospering on his farm in Suffield, CT, Howard looked ahead and made the wise decision to diversify the farm’s scope and added a small dairy herd. The dairy production at Hastings Farm grew over the years, as ownership of the business passed from Howard to his son Richie, and then from Richie on to a third generation, his son Larry.

Today, a fourth and even fifth generation actively take part in the activities at Hastings Farm. Just as Howard oversaw the farm’s transformation from tobacco cultivation to dairy production, this new era of leadership has seen Hastings Farm evolve even further. These developments include branching out into the on-site processing of milk, the raising of natural beef and the 2010 formation of a limited liability company (LLC) so that the Hastings’ fourth generation, daughters Megan and Lauren, could officially be brought into the family business.

Susan Hastings, Larry’s wife, today functions as a co-owner of the farm, though she insists her formal title is “Grandma.”

“We’re a good-sized farm,” she said. “We own about 200 acres and actively farm another 400. We have a herd of about 100 Holsteins and Jerseys for milking, and a small beef herd in addition to that. We produce whole, creamline milk, and low temperature-pasteurized (often called vat pasteurized) milk. We also offer nine flavors of Greek yogurt – key lime is very popular, as is our seasonal pumpkin pie flavor.”

During the winter months, when the work pace at the farm is slightly more relaxed, Hastings Farm prepares handcrafted and aged hard cheeses. “We have cheddar, Gouda, Havarti and Swiss.” Hastings distributes these products throughout Connecticut.

There is also the on-site Hastings Farm Store, which was completed in 2011. Customers can find not only all of the products named above, but also ricotta cheese and local honey fresh from Hilltop Apiaries in West Hartford, CT, as well as Hastings Farm natural beef.

Susan said, “Our beef herd is raised on the farm without the use of feed antibiotics or artificial growth hormones. Our beef cows eat feed raised here on the farm as well. The beef is then dry aged and cut at a USDA-inspected and humane-certified facility.”

Continuing its methodology of looking ahead and changing with the times, Hastings Farm now uses a robotic milking machine.

“The benefits of the robotic milking machine are twofold,” Susan explained. “It does reduce our labor costs in the long run, and it’s also beneficial to the cows. It enables the higher producing cows to get milked more often; we have some cows that can get milked up to five times a day. This results in less pressure on these high producers’ udders, which makes the whole thing easier on their bodies.” Of the farm’s herd of 100 milking cows, 60 are milked by the robotic milking machine, while the remaining 40 are milked in a traditional milking parlor.

Susan is confident that both the family and their farm will continue to change, grow and thrive in the years to come. “It’s a great farm, and an even better family!” she said.