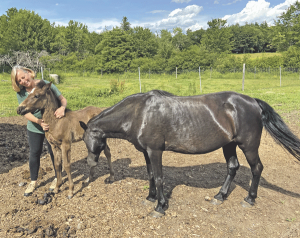 Newfoundland ponies are very healthy, diverse, hearty ponies, with hooves as hard as flint. Some change their coat colors seasonally. With excellent work ethics, they can be ridden, jump fences, be driven or pull as a farm work pony, typically growing to 11 to 14.2 hands. They are also bombproof. In the past, Emily Aho, founding member of the nonprofit Newfoundland Pony Conservancy Center, has taken her Newfoundland ponies to July Fourth fireworks.

“They do not react,” said Aho, of Jaffrey, NH. “Ninety-nine percent of this breed is like that. They blow my mind. I was used to other breeds that startled so easily. Because of that, it took me years to truly trust Newfoundlands” and count on their inherent calmness.

“The majority of the time they don’t spook, and if you’re near them if they do, they do anything they can do not to hurt you,” said Aho. “They are born imprinted. As a breed, the minute these ponies are put on the ground, they are already your friend.”

While they were eagerly awaiting a foal, Aho received word that her father, Emilio “Leo” DiPalma, had died April 8, aged 93. They could not hold a funeral. A World War II veteran – a member of 79th Infantry Division – he fought on the front lines and was known for his service as a courtroom guard at the first Nuremberg trial, guarding Nazi war criminals.

The foal, a colt, was born May 26. Sad and exhausted, Aho was at a loss for its name. “It didn’t come to me at all. When the Board and volunteers suggested Emilio’s Honor, I cried. I spent some time with him, calling him Leo. It was very healing.”

To help medical professionals burned out from caring for patients during the ongoing pandemic – and a retired nurse herself – Aho started Heal the Heroes and joined up with True Hope Therapeutic Horsemanship in Keene, NH, to work toward healing with Newfoundlands and other horses. “I was sad because I knew what they were going through. Doctors and nurses don’t take care of themselves. They take care of everyone else.” Eight people have attended so far, at no charge, with another group already started. U.S. Sen. Maggie Hassan (D-NH) recognized Aho as June’s Granite Stater for this program, a recognition given to those who serve their community.

“Tansy stole my heart. She was absolutely different than anything I’ve worked with before,” Aho said. She then joined the Newfoundland Pony Society, the only official Newfoundland pony registry in the world.

When Tansy’s sister Mandy came up for sale, she bought her. She acquired their dam, Applewood Highland Heather, when the woman who brought them into the country from Canada was sick. Next in line was a stallion from Maine. Along the way, through Newfoundland ponies, she met and married George Aho.

Then she got a call from Cindy Mehaney, a breeder in Michigan and fellow Newfoundland Pony Society member, who impressed upon Aho the need to breed her Newfoundlands, passing along the mantle of stewardship for the breed. As of 2020, there are only 400 Newfoundlands in the world. In the U.S., there are fewer than 40 of them, and 23 of those are under the Center’s program. Due to the Center’s efforts, four foals were born in the U.S. this year, and three last year.

She started her nonprofit in 2013 at their six-acre Monadnock Farm. Her husband George is president. They rescue Newfoundlands and find foster homes for them. When life happens, foster farms take their ponies to the Center, where they can be safely re-homed. This arrangement is especially important due to the economic impact of COVID-19.

In late September, the Center was donated a new farm by an anonymous donor, and therefore is relocating. “We are moving with all the critters to the new farm in Palermo, Maine,” Aho said. “True Hope is continuing their version of Heal the Heroes via therapeutic horsemanship. I’ll be offering Heal the Heroes in Maine as soon as we are settled and have local clients, aiming for October/November. We have an indoor arena there and can run programs independent of all but the severest weather.”

Aho is well acquainted with rescuing and sat on the board of the Newfoundland Pony Society during a time when “some still considered the pony a mutt and ponies still ended up on the meat truck.”

The Center works closely with and is mentored by the Equus Survival Trust, dedicated to saving rare horses, donkeys and ponies facing extinction.

Ten years ago, the Center rescued a 12-hand Newfoundland stallion with a broken femur. He was in terrible condition. “We took him home to have him put down humanely. It was so heartbreaking,” Aho said. Unexpectedly, their vet said that since he was small and young, they could wait and see what happened. “We gave him a chance. He’s obviously disabled but he is pain-free and has a good quality of life. He’s the epitome of a Newfoundland pony. I adore that stallion.” They pasture youngsters and other stallions with him, as most stallions get along. Of the seven stallions in the U.S., they have five in their program.

Newfoundlands achieved their hardiness as a matter of survival. Centuries ago, “a mix of Mountain and Moor ponies were sent out to help settle Newfoundland. They didn’t fence them in. They foraged for much of their food. A rugged environment, there are icebergs in the bays in July. As it’s a loch, food sources are poor, and it was survival of the fittest. They’ve never been improved. Newfoundlanders state that people would have either starved or frozen to death without the pony,” Aho explained.

Now, she is using Newfoundland ponies to help people survive the aftereffects of working with COVID-19.