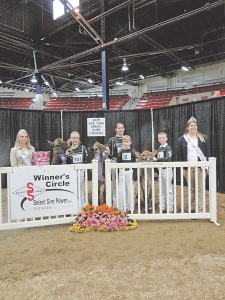 Spring is here, as was attested to by the large turnout at the prestigious 2019 Spring Dairy Carousel in Syracuse, NY. 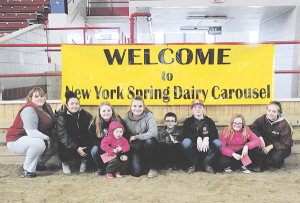 Youth from around the northeast flooded the show barns and the show ring and could be seen washing their cattle in the early morning hours and grooming them throughout the day. Some youth were even observed sleeping with their animals. Others made sure the show ring was kept manure-free during the show.

Richard Ball, Commissioner, NYS Dept. of Ag and Markets, was on hand to view the dairy cattle show and visit with folks there. 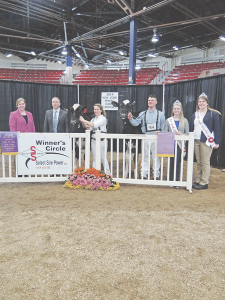 New York Holstein Association Distinguished Junior Member (DJM) Ellie Ainslie was one of the young folks on hand to help out at the event. She has been involved with the dairy industry all of her life and currently serves on the New York State Jr. Executive Committee representing dairy farmers and working with counties across the state.

“Each and every year the cream of the crop comes to the Spring Dairy Carousel show and I always enjoy seeing such high quality animals. The Holstein show specifically, was great to watch and to be a part of,” said Ainslie. “Over the last several years, numbers have dropped due to the state of the industry and the fewer number of farms. But the competition continues to improve each year, which has always impressed me.”

Reynolds said changes in scheduling this year were made to make the show more accessible for exhibitors.

“With an abbreviated schedule, hopefully, it was more economically friendly for exhibitors to come show off their best cattle,” Reynolds explained. “It’s such a great event to kick off spring and for people to get out and see great cattle, youth to compete in showmanship and judging, and just to join together as a dairy community and enjoy everything cows for a few days!”

Ainslie said the Spring Dairy Carousel is important to exhibitors because it’s the first large show of the year in the Northeast.

“It is open to all breeds and attracts people from all across the Northeast,” Ainslie explained. “Since this is the first big competition, many people like to bring their animals and see 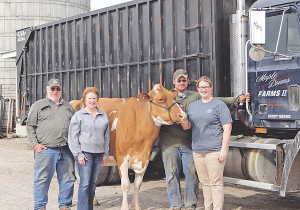 how they place early in the season and it helps them gauge the level and ability of their animal for later shows. And of course, it has become a tradition!”

Ainslie, who hails from the Otsego, Herkimer, Montgomery county area, and currently attends Cornell University, serves along side of DJM Rachel Rouland from Wayne County. They are excited to be hosting DJM Book Workshops this year, “to share the value of creating a record book and to encourage more overall participation among the Jr. Holstein Association.”

“Rachel and I are honored to represent and support dairy farmers across NYS this year as the Distinguished Junior Members,” said Ainslie.