New ways to use whey 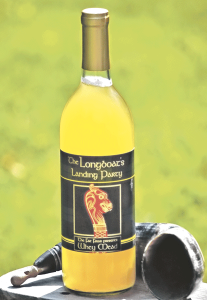 Waste not, want not – that’s what we’re taught. And that’s the sentiment behind a nascent movement for brewers who are playing with leftover whey.

Whey, the byproduct of cheesemaking and yogurt creation, often has no other use and is dumped or otherwise disposed of. (One pound of cheese generates nine pounds of whey; eight ounces of Greek yogurt leaves behind a pint of whey.) Sean Bailey of the Fat Friar’s Meadery, based in Newcastle, Maine, thought he could change that, based on research he had done.

Mead is most easily described as honey wine. Bailey is both a commercial mead maker and a member of the Society for Creative Anachronism, an international living history group with the aim of studying and recreating mainly Medieval European cultures and their histories before the 17th century. “I’m always looking for something new, and in my research on Viking cultures, I came across references to blaand,” Bailey said. Blaand is a fermented milk product made from whey, with a similar alcohol content to wine. It was a traditional Scottish drink for centuries, believed to have been introduced to the northern British Isles by Vikings.

“I started talking with a Danish woman who had done research on a drink made from fermented whey and honey,” Bailey said, and so he started to experiment.

He continued his research while making his first batch and came across a study done by the EPA in 1975, trying to figure out what to do with leftover liquid whey. It is costly to dehydrate and turn into protein powder; most of it was dumped. The EPA also considered whey-based alcohol for fuel purposes, but it was less cost-effective than consumption purposes.

Bailey ended up creating the Longboat’s Landing Party, a specialty sour mead made with honey and liquid whey, with 10.5% ABV. It took a while to get it right: “Liquid whey has complex carbohydrates that yeast can’t break down easily,” Bailey explained. “The Vikings used a more virulent wild yeast; we used a more tame strain so it wouldn’t overtake everything we were brewing.”

And, as far as he knows, mead made with whey commercially is not very prolific. “It’s just me and a place in Australia,” he laughed, “although I know there are some homebrewers trying it out as well.”

In Maine, Bailey sources his whey from Appleton Creamery and the State of Maine Cheese Company in Rockport. “I’m not doing huge batch runs of it, just 22 gallons at a time,” he said. “But I’m happy to find a use for the whey.”

As for the taste profile, Bailey said the mead has an almost vinegary sourness to start with, but it finishes almost creamy like a cheese, with a hint of smokiness. “The feedback is split down the middle,” he noted. “Some people love it, some hate it. It’s supposed to be sour. It’s fun to experiment.”

Sam Alcaine, an assistant professor at Cornell University’s Department of Food Science, would likely agree with that statement. The university announced in early 2019 that Alcaine had started making an alcoholic beer-like drink made from acid whey. Acid whey is a byproduct of New York State’s flourishing Greek yogurt industry. (In contrast, the leftovers from cheesemaking are usually called sweet whey, which are a little easier to repurpose.)

Alcaine formerly served as a product innovation manager at Miller Brewing Company. In a release from Cornell, he said he hopes acid whey could join barley, corn, rye, grapes, apples and other fruits as an agricultural product used to produce alcoholic beverages.

His team’s first attempt at a beer made with whey resulted in a low-alcohol (2.7% ABV) beverage with a sour and salty flavor that was comparable to a German-style gose. It was also described by the university as being similar in flavor to pulque, a central Mexican drink made from agave.

Across the globe, others are experimenting too: Hartshorn Distillery in Australia uses sheep whey to make a vodka; Black Cow in the UK sells a whey-derived vodka as well.

The Cornell professor also leads the Alcaine Research Group, which is “fermenting ideas in dairy culture.” You can see what they’re up to on their Facebook page.