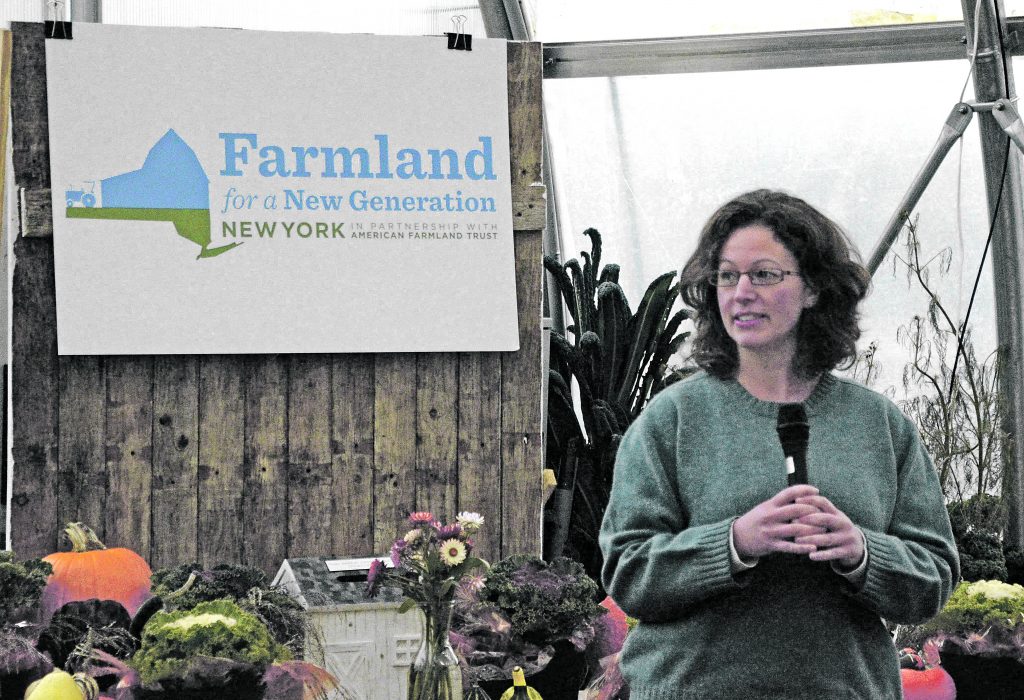 by Courtney Llewellyn
Late last month, on a brisk autumn day in a greenhouse in Saratoga Springs, big news broke: American Farmland Trust had partnered with the State of New York, agricultural organizations, land trusts and others to launch Farmland for a New Generation New York. The new program is the first to span the Empire State to connect farmers seeking land with landowners looking to keep their land in farming.
“Simply put, it’s hard to get into farming, especially in New York,” David Haight, New York State director and vice president of programs, American Farmland Trust, stated bluntly. “And some would say it’s harder to get out of farming than to get in. The old alternative when you wanted to sell was to give to whoever would pay the most for your land – most often housing developments. That has led to more than 5,000 farms being paved over.”
To prevent that from happening in the future, Farmland for a New Generation New York offers a resource center coordinated by American Farmland Trust with expert advisors and a website featuring training materials and a listing of farmers in search of land and landowners seeking someone to farm their land. The program also supports a network of regional navigators, or partner organizations, that will provide training and customized support for farmers and landowners across New York.
On the day of its launch, Haight stated there were 195 farmers with listings on the site, either looking for land or looking to lease land.
“That number is a bright spot,” Assemblymember Carrie Woerner, District 113, said. “It means there are still 195 people who want to farm here, despite the challenges they may face.”
Jillian Kasow, director of the New York State Legislative Commission on Rural Resources, noted that the timing of the program’s launch could not have been more relevant. “Our urban center populations are growing, as is their demand for fresh, locally-grown food,” she said. “New York is ready for this challenge. We are anticipating a wave of retiring farmers, and this program promises to connect them to those who are ready to step up.”
American Farmland Trust estimates nearly two million acres of farmland in New York will be changing hands in the near future.
Farmland for a New Generation New York expands on the success of the Hudson Valley Farmlink, a partnership of 15 organizations coordinated by American Farmland Trust. The Hudson Valley Farmlink Network has successfully helped more than 140 farmers find a place to farm in the valley since its launch in 2014.
Samantha Kemnah, who owns and operates Clover Bliss Farm in Argyle, NY, with her husband Chris, told her story of success through the Farmlink program. “We were not from farm families. We looked for land all over New York and didn’t have any matches for a long time,” she said. “We leased land in Greene County and were eventually matched with the land we needed in Washington County.” Today, Clover Bliss Farm is a grass-fed dairy.
State funding for this program totaling $400,000 was supported by Governor Andrew Cuomo, Senator Pamela Helming, Senator Patty Ritchie, Assemblymember Bill Magee and Assemblymember Carrie Woerner.
“We are pleased to partner with American Farmland Trust on this exciting new program that will help connect our beginning farmers with one of New York State’s greatest assets, its agricultural land,” Richard Ball, Department of Agriculture and Markets commissioner, stated. “Working together, we are focused on supporting our next generation of farmers while helping to ensure that farmland remains used to produce fresh, local food and beverages for communities across the state.”
The website, currently accessible, is www.NYfarmlandfinder.org .
“This could be the most progressive program like this in the country,” Haight said.