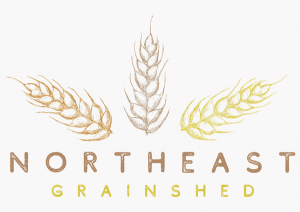 Although most of the country’s wheat is milled in just a handful of large-scale mills around the U.S. or overseas, there is a growing movement of grain growers, bakers and brewers cultivating a local supply chain of craft grains. The Northeast is home to a hub of producers leading the movement. They recently got together to form a coalition to strengthen their message.

The Northeast Grainshed was formally formed this January at a symposium held in Canton, MA, with more than 200 farmers, bakers, maltsters, millers, brewers, distillers, restaurateurs, educators, researchers and interested consumers in attendance. Their purpose was to organize to develop marketing efforts that create consumer awareness and demand for locally grown grains.

“The turnout was awesome,” said founding board member and maltster/miller Andrea Stanley of Hadley, MA’s Valley Malt. “It was more than double what we expected. The symposium was really an important thing to have happen.”

The group hopes the symposium will be an annual event and include aspects open to the public in coming years.

The aim of the Northeast Grainshed, set up like a trade association, is two-fold – peer-to-peer outreach and consumer education.

The group hopes to grow a coordinated marketing campaign for a “local grain brand.” So far it has created a logo for members to use on packaging, a marketing kit, a Northeast grains directory and a virtual bulletin board for members and the public to share resources and equipment.

To help members tell their story, a variation of the logo depicts the square foot symbol to show consumers how many square feet of land and soil it takes to grow a can of beer or loaf of bread. One loaf of bread takes 18 square feet of grain field; a can of IPA takes four square feet. Stanley hopes introducing consumers to where their beer and bread come from in concrete ways like this will increase awareness of the labor that goes into making the product and develop a deeper connection.

“There are now hundreds of people in New England involved in touching local grains,” said Stanley at the Maine Grain Conference earlier this year. “There is now a ground swell of people. The next step is to bring it to the consumer. Grains are part of a local healthy food system and people.

“If we want [local craft grains] to be sustainable, we need more acreage,” said Stanley, who noted that seed dealers don’t prioritize these grain seeds because it’s not a big market.

The Grainshed is fiscally sponsored by the nonprofit Tiny Seed Project and is currently funded by membership fees and donations, with several grant proposals in the works to establish grain hubs, address infrastructure and continue a coordinated consumer marketing campaign.

It currently has 75 members, including a 38-member advisory board. Many members have made a pledge or call to action. Breweries like Maine’s Allagash Brewing Company, which has previously stated a goal of using one million pounds of local grain by 2021, promised a continued commitment to use local small grains and educate consumers about its importance. Others pledged a commitment to visiting other Grainshed members, helping with variety trials and hosting Grainshed events.

Since COVID-19 hit, the Northeast Grainshed has increased collaborations with other organizations and support to its membership by highlighting the impact a local grain chain can have on its community, said program coordinator Emily Cayer.

The Grainshed has organized Instagram Live check-ins featuring members and other leaders in the movement from around the country, which have created community during the pandemic.

“As food supply chains are disrupted because of the pandemic, problems from depending on out-of-region food have become more apparent,” Cayer said. “Throughout the past several months, food systems are stepping up to meet the demands for staple food items, like flour, which demonstrates why the Northeast is an appropriate place to carry out our partnership activities.”

Some member mills have ramped up production to keep up with new demand. Massachusetts-based One Mighty Mill had a 25% production increase, while Ground Up Grain, also in the Bay State, went from milling 1,000 pounds of flour over a six-month period pre-pandemic to 10,000 pounds per week since the pandemic, according to Cayer.

“These opportunities open the door to continue and expand these efforts through an organized and collaborative partnership,” said Cayer. “The pandemic is impacting food supplies worldwide, presenting numerous challenges and causing some shortages, which demonstrates the importance of rebuilding stable and resilient food systems at a regional level.”