In 2013, the year Ashlee Kleinhammer and Steven Googin purchased North Country Creamery, there were 610,000 dairy cows in New York State. Only 20 of these cows belonged to Kleinhammer and Googin. For the most part, Kleinhammer is the cow manager, while Googin focuses on infrastructure development and maintenance.

In an industry dominated by consolidation and increasing milk production per cow, this couple is bucking that trend, producing and direct marketing 100% grass-fed milk on their 120-acre farm. Their herd is animal welfare approved by A Greener World. They mostly make yogurt but also some cheeses. Raw milk is available at their farm store. 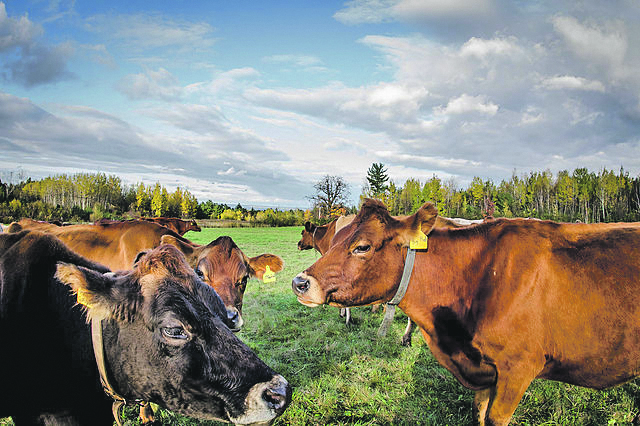 There was some dairy infrastructure in place when they got there, including a large 100-year-old barn with a one-sided, five-cow parlor and a creamery with a 180-gallon vat pasteurizer. There was also a 30- by 50-foot hoop barn.

Though inspired by the New Zealand low-input style of farming, which emphasizes grazing, winter is a reality at this latitude. In 2018, they added a 40- by 60-foot addition to the hoop barn. “Our feeding area is in the original smaller barn,” Kleinhammer said, “and the new barn is a compost bedded pack for the milk cows, dry cows and replacement heifers.” They feed round bales of baleage, all of which is purchased. The all-forage ration is supplemented with one pound of molasses per milk cow per day.

This winter, they will use sawdust in the bedded pack rather than chopped mulch hay. Kleinhammer said that chopping and blowing the hay was labor intensive and dusty. With the sawdust, they expect to apply 16 yards a week, which they plan to smooth with the bucket loader on their one tractor. Twice a day they will rototill the pack, just like they did when they were using mulch hay.

Ultimately, their goal is to double the length of the bedded back area and have a feed alley along the length of the barn. This would free up the current feed area for the mobile milking parlor they fantasize about. In winter, the mobile parlor would be parked in the hoop barn, and during the grazing season rotated within their pasture system.

In a separate 20- by 30-foot hoop structure reside their nurse cows and calves who suckle for four to six months. Kleinhammer said, “We had group housing with New Zealand-style nipple pails prior to the nurse cows.” Since switching to nurse cows, she said they don’t see any more cross sucking and the calves are more robust and make a more successful transition to an all forage ration.

During the grazing season, the barns empty out and Kleinhammer revels in managing their 50 acres of pasture. She uses a leader-follower system; the milkers hit a paddock first, followed by the dry cows and heifers. Since the pasture is one large contiguous rectangle, it easily lends itself to strip grazing, with Kleinhammer moving the milk cows three times a day. “We graze really quick in the spring and then slow it down in the summer. We get about four or five rotations per year,” she said. During the autumn shoulder season, they will feed baleage in the pasture, using movable covered hay wagons.

2021 was their first foray into tillage. They borrowed equipment, plowed four acres of pasture and planted sorghum-sudangrass. According to Kleinhammer, it was an excellent buffer against the summer slump. After the last grazing, they seeded the acreage to winter rye and triticale, which they will graze next spring before seeding it back to sorghum-sudangrass. “Our original thought was to plow four acres per year and put it back to perennial pasture, but I now realize how intensive it is to plow and till,” Kleinhammer said.

Kleinhammer and Googin’s management decisions are philosophically-driven, but these decisions also help them achieve a daily average of 40 pounds of milk per cow while feeding no grain. This level of production, though, is not the historic norm.

When they started farming, they followed a traditional twice a day milking model, but there was simply not enough time to produce, process, market and distribute their products. It wasn’t only that; the cows weren’t breeding back. For the next six years, they milked once a day, but Kleinhammer said even though the cows bred back, production just kept going down. In May 2021, they switched to three milkings in two days. “This system has been really good,” Kleinhammer said. “It’s still a great quality of life and a lot more milk.” Because she is able to maintain milk production and doesn’t need more than a few replacements a year, she is aiming for an 18-month lactation.

Most of the cows are Jerseys, though they are focused on changing the genetics of the herd with Normande semen. According to Kleinhammer, Normande milk is better for yogurt and cheese making because it has a similar fat content as Jersey milk but more protein. “A lot of the fat of Jersey milk comes out in the whey. The Normandes’ higher protein balances that out,” she said.

The creamery consumes most of the labor provided by their five part-time employees. Currently, they utilize 60% to 65% of their milk as yogurt, 5% to 10% as raw milk and the remainder for cheese. Kleinhammer said that yogurt is better for cash flow and demands less labor than cheese.

In 2021, they upgraded to an Anco Equipment 300-gallon vat, which has improved the efficiency of the creamery. Since they can now make 200-gallon batches, they make yogurt only once a week. After the milk is heat-treated, cooled and cultured, they fill plastic quarts with an and move the containers into a four- by eight-foot insulated room. It’s heated by space heaters. When incubation is complete, they unplug the heaters and it functions as a cooler with the use of an air conditioning unit. Before they can make the next batch, they shift the yogurt into an adjacent cooler.

Thursday is cheese making day. Aged hard cheeses from heat-treated milk include Havarti, Havarti with fresh dill, Pepper Jack, feta and a new cheese they call Highland. “Highland is a little sharper than our Havarti with a creamy and buttery texture,” Kleinhammer said. After pressing, the hard cheeses are vacuum sealed and aged in a walk-in cooler. They also make some seasonal soft cheeses – fromage blanc and Camembert.

About 75% to 80% of the yogurt and cheese is wholesaled to natural food stores, restaurants, schools and hospitals. They use a local distributor to get their products to nearby markets and a wholesaler who moves goods into downstate markets. The remainder of the cheese and yogurt is sold at their farm store and one farmers market.

The creamery consumes much of Kleinhammer’s time, but when it comes down to it, she’s happiest out on pasture or in the barn. “I enjoy making our products,” she said, “but my passion is grazing and herd health. I am not staying up at night reading articles about cheese making. I am doing that with grazing and cows.”