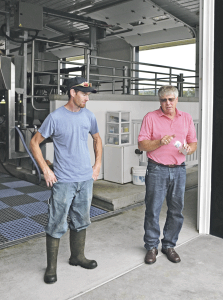 Like many farms, Gro-Lan Farms had a simple start, but the Grove family continually sought improvements that would increase efficiency and cow comfort.

“It was a homestead started by my grandfather in 1918,” said Jay Grove, who has been farming in Shippensburg, PA, for many years with his brother Jeff. “There was a log house and a barn, and a mud hole of a pond in between.”

Over the years, the Groves added silos, a loafing barn and a machine shed. In 1973, when the milking herd included 60 cows, the brothers built a small parlor that Grove describes as an eight-cow carousel. The brothers were happy with the arrangement, but numerous breakdowns over the years revealed an unreliable system.

“We started looking at other milking parlors when the railroad track underneath broke down,” said Grove. “When we welded a break, it broke inside the weld. If I could have kept that parlor going, I would have, but breakdowns made it iffy.” Grove added that when the carousel wouldn’t turn, milking came to a halt unless they brought friends to help push it.

When the next generation showed interest in continuing on the farm, family members who had joined the operation decided a new milking facility was necessary. Grove explained that adding the next generation and embarking on a costly new project required the formation of an LLC and a contractual agreement outlining responsibilities and commitment to the farm. “What they are purchasing at this point is partial ownership in cattle and machinery,” said Grove. “We’re working them in slowly.”

The family spent five years planning the new parlor. During the process, they discussed the merits of herringbone versus parallel, as well as other options, and looked at numerous parlors throughout the state. “We looked heavily into robotics and how we might retrofit that kind of system with our operation,” said Grove. “But we decided we needed to be there with the cows.”

As they planned the new facility, the Groves adopted and adapted some of the innovations they saw while visiting other farms, including a basement under the parlor. “We knew that was an extra cost, but the technology is worthwhile,” said Grove, adding that the basement makes easy work for the DHIA tester. “It made sense to keep the electronics viable and handy. I think we’ll see savings over the long run.”

The family eventually settled on a parlor company that had the most features they wanted, including a cow activity system that’s coordinated with the parlor. The new facility is designed so it can easily be expanded to house 500 – 600 cows.

During the process of transferring leadership to the next generation and constructing a new parlor, the family worked with a profit team. Discussion topics included everything from financing to potential future expansion, along with financing options and all aspects of the project, from working out details with the township and site engineers to excavation and developing a water runoff plan.

“Throughout the building process, we used a consulting firm to help us,” said Grove. “We wanted to avoid having to deal with water runoff, so about one-third of the infrastructure of the new parlor is underground with a large underground tank for rainwater. We capture all the rainwater coming off the buildings and put it into the tank, and we can use it for wash water in the parlor. Another tank holds water for the plate cooler.”

Choosing subcontractors proved to be challenging. Rather than using the builder’s subcontractors, Grove wanted to use his own plumber, electrician and well driller. “The cost difference wasn’t much,” he said, “but I wanted them to be my neighbors who were close by and would be here right away if I had a problem.”

Despite having a sound plan, the Groves encountered some unexpected challenges, including having to drill a new well and the expense of running three-phase electricity to the barn. Although the goal was to avoid building in winter, everything was in place by September/October 2017, so construction began. The first cows were milked in the new parlor on May 1 of last year.

The new milking facility is a double-12 parallel parlor, which is more than adequate for the current milking herd. “Years ago, when we first started milking, I said there was no way we would milk like this,” said Grove. “But in the process of looking at parlors and improvements in parallel parlors, we came to the conclusion that it’s a safer and cleaner parlor to work in.”

In the previous arrangement, many cows waited over two hours to be milked – translating to lost milk production. Grove said in summer, the holding area was hot even with fans, so milk production has increased through a combination of shorter holding time and a more comfortable waiting area.

“We haven’t increased the number of employees since we moved into the new set-up,” said Grove. “We had two employees milking with the carousel, and with the new double-12, there are still two employees.” He added that one of the milkers is often either him or his brother (or they’re nearby).

The careful planning for every detail of the new parlor, from housing and cow movement to the holding area, has paid off. A spacious new utility room includes a pasteurizer for milk for calves. Bright lighting in the parlor provides ample light any time of day, and a heated floor in the parlor keeps milkers comfortable.

In comparing the old parlor to the proposed new parlor and what’s in place now, Grove explained there’s little he’d change because he spent time working out the most minute details – from the direction doors and gates would open to the placement of each light switch. He said cooperation among team members and ongoing communication throughout the project were among the important aspects that led to successful results.

Grove is adamant about every aspect of the farm’s appearance, from inside the barns to the exterior, not just for his family’s pride but because the farm is highly visible from a main highway.

“My goal is to keep the farm friendly to the eyes,” he said.