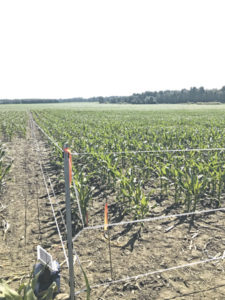 Joe Lawrence is a dairy forage systems specialist at Cornell’s PRO-DAIRY, in charge of

implementing the annual Commercial Corn Silage Hybrid Testing Program in New York in collaboration with Heather Darby of the University of Vermont.

Lawrence presented some of his research during a collaborative dairy webinar series, which was sponsored by UVM Extension and the Northwest Crops and Soils Program. Producers can use PRO-DAIRY’s trial data to benchmark their silage varieties’ performance and help them choose which hybrids will perform best in their locations.

Lawrence said, “When we restarted the silage testing program in 2016, we decided to use the Cornell Nutrition Model – already a backbone for ration programs – to test our trials.” This model predicts milk yields based on overall diet.

This approach in simulating changes to a diet is slightly different from the commonly used MILK2006, an industry standard for evaluating hybrid performance. According to Lawrence, MILK2006 uses forage quality parameters to predict milk production per ton of forage. From this, you can extrapolate milk production per acre.

“There have been a lot of advances in dairy nutritional science since the MILK2006 model was created. One example is fiber digestibility, and this model just didn’t take those things into account,” Lawrence said. Fiber digestibility is important because the energy content of corn silage is primarily determined by the amount and digestibility of fiber.

In 2020, the team trialed 90 varieties from 17 seed companies at four New York test sites and one in Vermont. Varieties are divided into two groups: an 80- to 95-day relative maturity and a 96- to 110-day relative maturity. New York trials were grown in Albion, Madrid, Aurora and Willsboro, and the Vermont trial was in Alburgh.

In the trials, researchers balance a ration that aims for 100 pounds of milk production per day and 60 pounds of dry matter intake, consisting of a nutritionally average corn silage, alfalfa haylage and a little bit of straw.

“Then, we take out that average corn silage, put in one of the samples from our trials and see how it influences milk production,” Lawrence said. “We’re not rebalancing the whole ration like you might do if you introduced a new silage. We’re just trying to calculate the effect of just the corn silage. It’s not a perfect system but we do feel like it’s an interesting way to just look at the relative differences in the corn silage.”

Lawrence and his team collect data and then collate it onto an open-source spreadsheet, listing relevant information. He cautioned against viewing these resources as a hybrid ranking contest. Rather, he encouraged producers to use the data to calibrate themselves to the growing season.

For example, research shows that higher rainfall tends to lead to poorer digestibility. If faced with a wet year, a producer could find a wet season on the Cornell spreadsheet and get data about fiber digestibility. “If you know this in August, based on the growing season, maybe it’s time to start talking to your nutritionist about what you’re going to be feeding next winter when you have to start feeding this new corn silage,” Lawrence said.

Lawrence also uses the trials to analyze the role of growing degree days (GDD) and how well they determine when corn silage is ready to be harvested.

One way corn GDDs are calculated is by using the average method – subtract the minimum temperature for the day from the maximum temperature. Then you subtract the base temperature, which for corn is 50. The high and low for calculating corn GDD can never be over 86º or under 50º.

Lawrence warned that 2020 served as a good reminder that not all GDDs are created equal. Three of the trial locations were in the middle of the range for GDDs and averaged about 36% whole plant dry matter at harvest, the ideal for harvest.

The Madrid, NY, trial had the most GDDs but the lowest average dry matter. According to Lawrence, the crop was drought-stressed before tasseling but then received decent rains. “By being patient and waiting, we captured a pretty high quality corn silage from the Madrid plot, but we had to wait longer to get it. We couldn’t just go off the GDD – we really had to watch the crop. If we had just relied on GDD and harvested earlier, it would have only been 30% whole plant dry matter.”

Looking into the future, Lawrence said he’s more excited about refining these growing and harvesting techniques than getting caught up in the latest trends. “We’ve been talking about these topics for 20 years, yet we still know that there’s progress to be made on many farms.”

More information about the Cornell PRO-DAIRY corn silage trials can be found at prodairy.cals.cornell.edu.