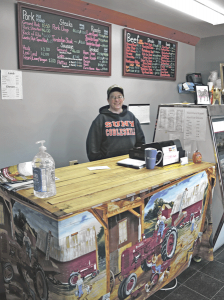 COLUMBIA, NH – Opening the MeatHouse farm store on U.S. Route 3 in Columbia, not far from the Connecticut River, has allowed Chris and Joyce Brady to vertically integrate their diversified CJEJ Farm in Coos County, the largest and most northerly of the state’s 10 counties.

“We’ve grown over the years, and now – except for the actual killing of the animals we raise – we have complete control: we grow our own grains and hay; breed and raise our own animals; and then process them,” explained Joyce Brady. “We take all our animals to be butchered at Northeast Kingdom Processing, a USDA-certified slaughterhouse about an hour away in Lyndonville, Vermont. When the USDA-stamped carcasses come back, I cut and process them. The only exception is our poultry – 100 laying hens and 600 Cornish Rock Cross broilers and each year 100 Broad Breasted White turkeys.”

Typically, CJEJ Farm has about 50 beef cattle (mostly Herefords), five sows (Yorkshire, Landrace and Duroc) and 20 feeder and market hogs on the place, according to its website. “We only raise one or two goats and lambs; there’s not much ethnic diversity here,” Joyce said.

“Right after animals are butchered, I post on our website (CJEJfarm.com) that we’ll soon have fresh meat, cut and wrapped in our cooler, but most of the meat we sell is sold frozen from our walk-in freezer,” she said. “There was a real learning curve before our customers understood that top-quality frozen meat is far better than anything they can buy at a supermarket. People buy fresh turkeys for Thanksgiving, and I sell some frozen for them for Christmas. Any excess I use to make ground turkey and turkey sausage.”

When she was a teen growing up in Brookfield, NH, Joyce worked at a farm that provided custom meat cutting services. “When I enrolled at the Thompson School of Applied Science at UNH, I signed up for both Abatoir (slaughterhouse) Management and Meat Production,” she explained.

After she and Chris were married, they worked on a farm in Maine. It had a meat cutting room in which Joyce worked.

When they moved to Vermont to work and live on Irwin’s Dairy Farm in Maidstone, the couple cobbled together a tractor trailer body and a refrigeration unit, so Joyce was able to cut meat.

“Looking back on it, I can’t think of a better place to raise our two young boys – Earl and Jacob – than on that farm, living in an A-frame,” Joyce said.

In 1997, Chris was one of the leaders of the River Valley Teamsters 4-H Club that worked together to harvest “popples” growing near the Connecticut River, then fashioned the wood into yokes for the oxen they trained and showed at the Lancaster Fair.

In 2000, Chris and Joyce bought their own 90-acre farm in New Hampshire. CJEJ Farm uses the family’s initials: Chris, Joyce, Earl and Jacob.

For years, Chris taught agricultural subjects at the Career and Technical Education center at White Mountain Regional High School and served as an FFA advisor. Both Earl and Jacob graduated first from WMRHS and then from SUNY Cobleskill. Chris later started a similar ag program at Canaan (Vermont) High School.

With both sons pursuing higher education, the couple began to think about what they could do to turn their farm into a business that could lure them back to their roots and support future generations.

In a bold move in 2015, Chris and Joyce built the MeatHouse behind their farmhouse, hoping would help them achieve this goal. Part of the 40-by-80-foot building is used for cutting up the animals slaughtered at the USDA facility, and part is a commercial kitchen, allowing value-added products to be made and sold. Another section is used for tractor and equipment storage.

Retail customers can buy meat, fresh eggs and cooked food, including chicken pot pies and chicken broth. They also carry Hatchland Farm products from North Haverhill: milk, cheese and ice cream. “Like us, Hatchland is a diversified farm; they raise all their own cows and have an on-site bottling plant,” Joyce said.

The couple’s work year is split roughly in half. Joyce butchers from September to March, with some custom butchering as needed. “I like to have the freezer full as spring begins to arrive,” she explained. Chris works on the farm year-round, although he and his wife regularly switch off morning and evening feeding chores.

The rest of the year, they mostly work outside, raising the crops they feed to their own animals: soybeans, barley or oats, hay and, until recently when the price dropped, corn. They lease or have the use of another 400 acres, cutting hay on land rented from Coos County plus using fields in Northumberland and Vermont.

Their sons are both married and fathers of two children, and both have found work they find engaging. “We’re so lucky our ‘boys’ returned to this area,” Joyce said.

Earl earned his DVM in 2018 at Cornell. He works for Cold Hollow Veterinary Services in Enosburg Falls, VT, but lives and works out of Newport, VT, caring for large animals in two Vermont counties plus Coos County. Earl has trained a pair of oxen to haul the maple sap from his sugarbush, using the yoke he made in 4-H over 20 years ago.

Jacob loves both farming and agricultural mechanics, specializing in John Deere equipment. He accepted a job as a full-time assistant caretaker at a 2,500-acre-plus forested tract in North Stratford. He works on the side as a mechanic. His family lives on what was once a dairy farm. Chris’s great-grandfather owned the place in the distant past.

A month ago, Chris and Joyce made another bold move and bought the Colebrook Feeds store in Colebrook. The store has an extensive pet department that specializes in dogs, and they plan to expand the feed and farm supplies sections, according to Joyce.