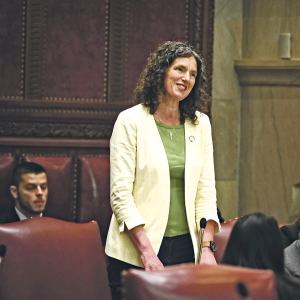 According to the USDA, the ratio of older to younger farmers in the Empire State is five to one. A series of initiatives have been implemented in recent years to address this imbalance and assist younger farmers in establishing themselves.

Farmland for a New Generation – New York is a program coordinated by American Farmland Trust, in partnership with the State of New York, agricultural organizations, land trusts and others that help farmers seeking land and landowners who want to keep their land in farming. Its website allows users to post a farmer or a farm property profile, search for farmers or search for farmland, learn about upcoming events, browse resources and contact organizations throughout New York. One of those resources is the New York State New Farmers Grant Fund Program.

The New Farmers Grant Fund is administered by Empire State Development, in consultation with the New York State Department of Agriculture and Markets. This program provides grants of up to $50,000 to those who have started a farm business within the last 10 years. The grants assist with up to 50% of eligible project costs, with the remaining 50% being matched by the recipients. The grants allow for the purchase of machinery, equipment, supplies and the construction or improvement of agricultural structures. Since its inception in 2014, the program has awarded over $4 million to 114 young farmers across New York.

A small farm in Delaware County was a recent recipient of such a grant. Berry Brook Farm, located in the hamlet of DeLancey, will receive $16,500 to build a greenhouse and increase cold storage to expand production.

State Senator Jen Metzger, chair of the state’s Senate Committee on Agriculture, recently visited Berry Brook Farm, a Northeast Organic Farming Association (NOFA)-certified organic vegetable farm owned and operated by Eleanor Blakeslee-Drain and Patrick Hennebery. Blakeslee-Drain and Hennebery serve as a valuable example of young people successfully breaking into farming. They purchased the Berry Brook Farm property in March from the previous owners, whose family had it for several generations as a dairy farm for more than 100 years.

“As Senate Agriculture Chair, a major goal of mine is to pass legislation that makes it easier for a new generation of farmers to enter the field,” said Sen. Metzger. “This session, I carried legislation to expand eligibility under the Beginning Farmers Grant Fund, which unanimously passed the Senate and Assembly. Among other provisions, the bill allows newer farmers who report less than $10,000 in annual farm income to be considered for funding. We want a diverse, sustainable and vibrant agricultural future for New York, and with programs like the Beginning Farmers Grant Fund we can empower our next generation of farmers through access to necessary capital that they can use to invest in their businesses.”

During the 2019 legislative session, Metzger sponsored and helped pass through the Senate a number of bills to support new and early-stage farmers including two bills to expand eligibility for the Beginning Farmers Fund (S.5716) and the Young Farmers Loan Forgiveness Incentive Program (S.5715) and (S.3837), which creates a young farmers apprentice program through BOCES to help the next generation of farmers learn and develop skills.

“We’ve been involved in grant programs and assistance for new farmers at the local, county, state, regional and federal levels,” said Berry Brook’s Blakeslee-Drain. “They’ve allowed us to build up our business from scratch. We’re so grateful to the New Farmers Grant Program for this recent award. It’s very impactful.”