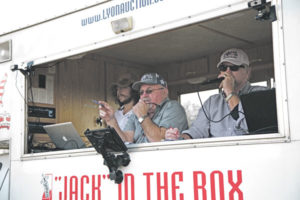 Making connections and learning about the newest ag technologies are definitely important parts of one of the best farm shows on the East Coast – Empire Farm Days, set for Aug. 3 – 5 – but another critical draw is the equipment auction. Those looking to get great deals on like-new equipment are in for a treat at this year’s show.

Taking over the auction that will occur at the same time as Empire Farm Days is Alex Lyon & Son Auctions, based in nearby Bridgeport, NY. The auction will take place over two days, Wednesday, Aug. 3 and Thursday, Aug. 4. Day 1 will be a live, in-person event, while Day 2 will feature a timed auction during which bidders can make their offers from anywhere.

“If you’re there for Day 1, you can come in from the show, from your office, and make your bids,” explained auctioneer Jack Lyon. “On Day 2, you can bid from anywhere. We’ll have computers set up for people to use to bid. It’s the best of both worlds for everybody.”

Alex Lyon & Son has been in business since 1973, and this family-owned operation is a worldwide success. They conduct construction equipment auctions throughout the U.S. and have seen customers from China, Saudi Arabia, Spain, Turkey, Israel and the African continent.

Lyon said his business both actively seeks out lots for the auction and has people contact them – either through standard media or online. “We’re looking to bring in really good stuff,” he said. “It’s a latest and greatest sale.”

He said a lot of the merchandise to be featured will be machines with low hours of use – “young machines.” He wants to bring “class to the auction.”

There are no high sales expectations for Alex Lyon & Son this year, as it is their first year being a part of Empire Farm Days. “A new broom sweeps clean,” Lyon said. “We’re just hoping for good numbers.”

For more information on Empire Farm Days, check out empirefarmdays.leetradeshows.com. To get in contact with Alex Lyon & Son Auctions, visit Lyonauction.com.