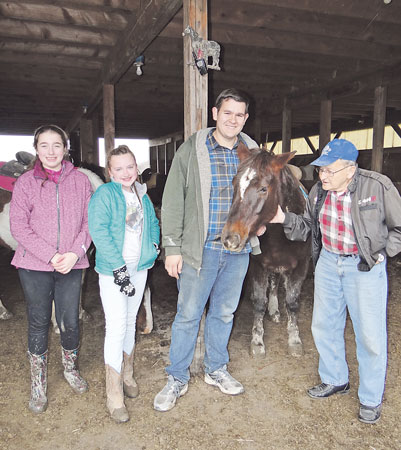 When you arrive at Kark’s Farm, Port Crane, NY, you don’t just see the Black Angus herd that come up to greet you like old friends. You hear children’s laughter and horses whinnying in the background — and you know there is more than meets the eye.

A 6th — and now 7th — generation of family spreads across more than 300 acres of fields and hills, where spectacular views of Broome County reach out in every direction, and you can feel God at work — literally.

“God has given me a very active life,” laughs Charles Kark, founder of Path Of Life Camp, which has been part of the family’s history for nearly 50 years; built on adjoining land donated by the Kark family.

The Christian camp was originally started for deaf children, but has since expanded to include all.

Charles explains. “Both my aunt and my mother had foster children. My aunt was given a deaf girl as a foster child, and she realized there were a lot of other deaf kids around that we didn’t even know about. Back in that day sometimes deaf children were assigned a room in their house and they weren’t allowed out in public. It was a sad thing.”

Charles says it was during the 1960s when his aunt made a mission of finding as many of those deaf children as she could, and would take them to a Christian camp in Tennessee. Then she had the idea of beginning a camp at home.

The farm had been a dairy since the late 1800s.

Charles says as a young man, he was active in Youth For Christ and had clubs in 17 schools, holding rallies on Saturdays. “There were about 300 kids that would come. I rented the two largest auditoriums in the area — they would hold 1,000 people — and I showed Billy Graham films. I was only19 when I did that.”

Charles also had a daily Christian radio program at the time.

He was 24-years-old when he came home in 1962 and bought the farm from his father.

“There were 385 acres and afterwards I added another 70, so at one time I had 455 acres. We milked about 50 cows and we stayed at about that size for milking, but we had about 100 head of cattle with the heifers and calves to keep it going. Of course farming was not really lucrative, so I drove school bus also. I did that for 42 and a half years.”

Kark started the camp in 1970 when he was 32-years old. Now, his 28-year-old grandson, Brad, runs the camp with help from other family members and some outside staff.

Charles said, “That year was a challenge.”

The camp was built in a cow pasture, and everything including roads, electric lines, a well and septic had to be installed, as well as buildings.

“Janice Handy and her husband were involved with building the building and the chapel,” Charles recalled.

Down the road a bit, the farm evolved from dairy to focusing on beef.

Charles, who now at 80-years-young is still preaching, says he owned the farm for 50 years before selling it in 2012 to his son Jonathan, one of his six children.

Jonathan, his wife Pattie, their children, and grandchildren, all take an active part in the farm.

“When I bought the farm from my dad, we just had beef,” Jonathan remarked. “When I was a kid it was a dairy farm and it had been a dairy farm since the late 1800s. Dad had already sold the dairy and he had 20–25 head of beef cows. We brought in the Angus. He had Herefords. He had bought a Hereford bull and bred what was left of the dairy cows, so we ended up with beef calves.”

After buying the farm Jonathan focused on a Black Angus cow/calf operation, because he found the market leans towards them. “They bring better money.”

Although they originally sold feeder calves at a local sale, they now work with a private dealer with a liking for their stock. He comes to the farm, purchasing the calves when they are about 6 months old, weighing about 550 lbs.

Kark does cull out some older cows, keeping his numbers right around 50 cows.

“I’m trying to get so that all of my cows are 7-years-old or less. To get my herd down to where all my mamas are young. Then I’ll start selling replacement heifers.”

He plans to raise them through their first two calvings, assuring they are good, easy calving mothers.

“By the time they’re 5-years-old, they’ve already calved twice, and we’ll know they calve easy and don’t have any problems. They’re still considered a young cow, but they’ve already been proven.”

This market will target farms buying to add to their existing herd or starting a new herd.

“Then I will probably keep all of my heifers and sell calves and replacement cows.”

Kark says they have a closed herd and don’t bring any animals on the property out of sale barns or from other farms. They do not use any other livestock trailers, except when shipping out feeder calves.

This strict protocol helps minimize sickness and lowers the need for vaccinations.

“People get nervous when they hear vaccinations and all of that, so we try to keep medications to a very minimum. However, when we sell calves the dealer does want them to have shots for shipping and for when they go through other barns where other cows have been. So we do vaccinate them.”

Feeders are vaccinated a few weeks before they leave the farm.

The herd is “grass-fed” and all hay is produced on the farm. Minerals are fed additionally, as the area is low in minerals. Calves are typically fed a mineral-balanced calf starter for the first few weeks.

Although the farm has not had any problems with difficult births or calf mortality, they are considering bringing in extra colostrum as an insurance against possible future need.

That includes handling the cattle — even the bulls — every day, as much as possible.

“Cows and calves are all handled so much, they come to us out of the pasture. We don’t chase them. My wife walks up to the gate and lets out a war whoop and here they come! If you come in the pasture, they’re going to come see what you want.”

Karks say they keep the environment stress-free for the herd.

“We feel that when a cow is happy, they’ll do better. They’re used to people and being handled- even the bulls are very docile.”

A barn is available and free choice stalls keep the herd comfortable all winter.

Pattie and Jonathan’s son Zachary, back from the Air Force, also works with the farm.

“For beef farmers, your end result is getting the biggest and best calf you can get,” Zachary remarked. So, we do everything possible that we can — and sometimes we think it’s the hardest way possible — to ensure we get the most survival rate possible for our calves and they’re getting the best start that we can possibly give them.”

Jonathan works off of the farm as a heavy equipment operator and is frequently away from home, while Zach lives on the farm.

“This is a true family farm,” emphasizes Pattie. “All of our kids and grand-kids help when they can. Our oldest daughter Danielle and her husband Alonzo Werner, when they are home from pipe-lining, do a lot. Alonzo is a welder so he does a lot of fixing, he and their children, Jayleigh and Hollin, help with haying. Our daughter Jessica and her husband Ben Moore-Hovancik are always on call for anything we might need done. Our son Zach is our right hand man doing anything from cattle handling and any vetting that needs to be done, to building and repairing things in the barn. He also heads up the haying operation. Our daughter Chrissy and her fiancé Keith Hall also fill in wherever needed. Keith is our bull handler — he seems to speak their language. Since Jon is gone most of the time it takes all of us working together to keep this farm going.”

Karks are venturing into raising goats this coming year.