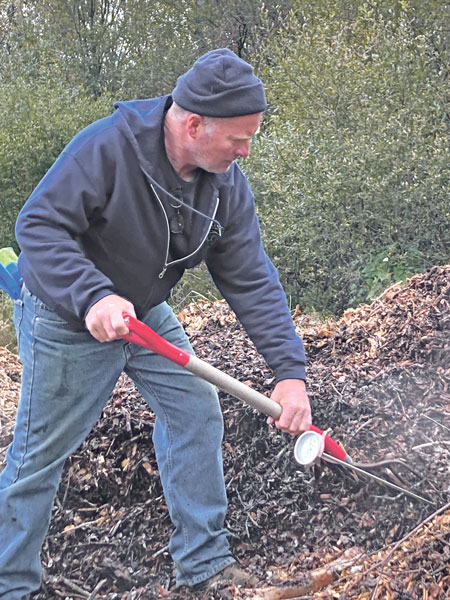 On Oct. 16, Cornell Cooperative Extension of Orange County presented an interesting (although unusual) program: “Bring Your Own Carcass Composting Training.” Held at their Education Center & 4-H Park in Otisville, NY, the program was designed for Department of Public Works/Department of Transportation administrators and field workers, veterinarians and animal producers interested in learning the benefits of composting carcasses.

Jean Bonethol, Cornell Waste Management Institute, provided an excellent hands-on class. The site contained several large mounds of woodchips – one of which covered the remains of two horses that had been euthanized and were composted on-site starting in late July.

DOT workers had brought in two road-killed deer, and the class was shown how to create a new composting pile using woodchips and a tractor bucket, in addition to how to add a carcass to an existing pile.

There are potential environmental and biosecurity risks of dead animal disposal; the lowest risk is for animals picked up by a rendering company within 48 hours of death or animals that are properly composted on the farm. There is some risk in burying animals less than 200 feet away from a water body, watercourse, well or spring or less than six feet deep; the highest risk of contamination comes from a carcass that’s left outside to decay or for scavengers.

Although there are a few options for off-site disposal, such as cremation/burial and rendering, many who keep horses have enough property in which to dispose of the animal, and composting provides an easy alternative that is cost effective, environmentally sound and biosecure. In many states, composting on-site is the preferred method of disposal, providing the proper guidelines are followed. The site must be located in a well-drained area along the edge of a field or another dry, convenient area far enough away from a well or water source. Composting requires the use of carbon sources such as woodchips, which can often be sourced for free from utility companies and road crews or acquired from sawmills and other wood businesses. On-farm carbon sources may also be used.

It’s especially important for horse owners to consider this method of disposal, as many of these animals have been euthanized with drugs such as sodium pentobarbital, which is potentially harmful or even fatal to wildlife and domestic animals.

Static pile composting is an easy and low-cost method of disposing of animals on your property; it takes about 12 months for large animals to decompose. If you have a horse that you know is nearing the end of its life, consider securing coarse woodchips ahead of time and stockpiling them in a place you will be composting your animal. These can be stored for six to 12 months. The amount of carbon material (woodchips) that’s required to compost a 1,200-pound horse is approximately 10 cubic yards.

The Cornell Waste Management Institute has provided an estimate of the total cost of composting a horse. The amount of labor involved is estimated at 30 minutes for preparation and covering, resulting in a labor cost of $7.50. The amount of fuel required for a 100-hp tractor would be approximately 0.4 gallons, and at $4/gallon costs $1.60. Along with the required use of a tractor and loader, with rental costs between $22 and $45 per hour, the total cost for material, equipment, fuel and labor would be between $170 to $380 if woodchips are purchased. A significant savings can be had if you can find woodchips for free (bringing the cost of composting your horse down to about $30 to $50).

The process begins by laying down a base of two- to six-inch-long pieces of carbon material (chipper residue containing small branchlets is ideal). The base should be no less than 24 inches deep, and large enough in circumference to provide two feet of clearance around the entire animal once it’s laid down. This provides adequate oxygen underneath and around the animal to begin the decomposition process.

Next, position the animal in the center of the prepared bed. It’s important to lance the dead animal in the abdomen to prevent. Cover the animal with 24 inches of carbon material (woodchips) completely, making sure all parts of the animal are well covered. This process helps to insulate heat generated by the organisms in the pile, helps to control any odors from the decomposition process and keeps unwanted wild or domestic animals away.

The pile should be left alone for six months (for smaller animals/poultry) to one year. After this time period, the pile can be turned or may be combined with another pile. It’s important to monitor the temperature of the compost pile and keep notes. The temperature inside the compost pile controls the destruction of pathogens, bacteria and fungi as well as affects the rate of decomposition. The goal is to have a high enough temperature to keep the process moving along relatively quickly. The most efficient temperature range is 104º – 140º F. The temperature of the compost pile will vary depending on how much heat is lost through surface cooling during periods of extremely cold weather, in which case the piles should be larger than usual to add more insulation. As the decomposition process slows, the temperature will gradually drop and eventually remain within a few degrees of the air temperature.

After a year, there will still be large bones left. The composted material can be reused for another carcass compost pile, or the bones can be removed to use the material for planting trees or other non-food crops. The cleanliness of the site is the most important part of composting, to control odors and deter scavengers.

Composting can be done at any time of the year, even when the ground is frozen. The equipment needed for composting large animals is already available on most farms. The process is relatively odor-free. All sizes of animals, from chickens to horses, can be composted. In addition to whole carcasses, placental membranes and other tissue can be composted.

As described on the Cornell website, “Static pile composting is pretty magical.” The animal is covered with material and left for months or years with no additional work required. This is a humane and environmentally-friendly disposal which, although it requires adequate space for the piles, is a practice that can work for most livestock farms.

Composting is something that should be seriously considered by horse owners. No one wants to think about what happens when a beloved mount passes or is in a life-or-death situation or suffering from debilitating illness that it cannot recover from – but planning in advance is an important responsibility that goes along with providing care for an animal.