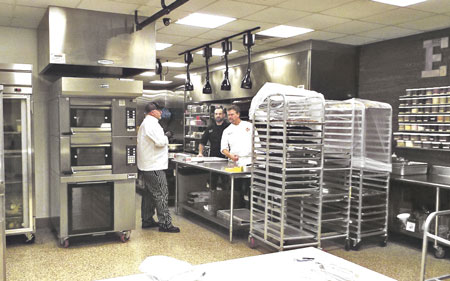 On Nov. 2, 2018, the National Angus Tour kicked off in Columbus, Ohio, as the opening event of the annual Angus Convention. Eager participants were treated to stops at the Certified Angus Beef Headquarters in Wooster, Ohio, and Claylick Run Farms in nearby Newark. This year marks the 40th anniversary of Certified Angus Beef and the tour offered an exclusive, behind-the-scene glimpse of the nation’s largest branded beef program, responsible for marketing more than one billion pounds yearly across the United States and more than 50 countries worldwide.

Certified Angus Beef (CAB®) is a wholly owned subsidiary of the American Angus Association with a mission of guaranteeing a better product for consumers while growing demand for registered Angus cattle. CAB is an industry success story responsible for making the term “Angus beef” a household name synonymous with quality and flavor. Today, 95 percent of consumers recognize the CAB logo, but that was not always the case.

CAB began in 1975 as the result of a single disappointing restaurant steak, which was advertised as Angus. Harold Etling, an Angus breeder and meat shop owner, was the recipient of that poor-quality steak and immediately wrote a letter to the director of the American Angus Association suggesting the need for a certification program to assure the public they were getting the genuine Angus beef they were paying for. The idea struck a chord, but support grew slowly, with the first program officially starting in 1978.

Forty years later, CAB has evolved from a niche market into a comprehensive program that involves breeders, meat packers, retailers, chefs and consumers. More than four million cattle a year meet the qualifications to wear the logo of certified Angus beef, earning their producers $50 per head or more in grid premiums.

Earning the CAB logo means meeting an unwavering set of specifications, starting with Angus-influenced cattle that are solid black with no other color behind the shoulder or above the flank. After harvest, all qualifying carcasses must meet 10 specifications aimed at quality assurance, including factors such as marbling, age, weight, size of ribeye and fat thickness. Not all Angus-identified cattle make the grade. Of those who fail, 92 percent do not have enough marbling, which directly impacts taste and tenderness. Angus breeders have responded to this over the years by selecting stock with superior marbling characteristics.

The global headquarters of CAB is a multi-faceted operation with 145 team members focused on every aspect of Angus beef and its marketing. The CAB campus houses not only executive offices, but a state-of-the-art culinary center and meat lab, resource library and advertising photography studio. The culinary center is a destination for world-class chefs and food service specialists to get personal experience in the science behind the Angus beef brand. Visitors can gain hands-on meat cutting experience by breaking down the massive primal cuts and learning the most effective commercial uses for each slice of the carcass. CAB makes these resources available to various groups, including Angus breeders, and can customize each experience based on the needs of the visitors.

One of the most innovative jobs of the culinary center is to discover new value-added methods of preparation for cuts of beef that are not commonly served in restaurants. Internationally known chef Tony Biggs greets tour participants in the research kitchen to demonstrate some of the upcoming culinary trends, including certified Angus gyros, smoked chuck roll and even beef sushi. “Beef is global,” he explained. “It speaks many languages.”

He demonstrated how presentation is used to upsell less-known cuts of beef. “Restaurants have to realize that they are not just in the beef business – they are in the wow-factor business,” he said as he pulled a chuck roll grilled cheese from a smoke-filled presentation box. “We are always looking to add value to cuts of beef.”

The visit concluded with a sumptuous lunch prepared by the chefs of the culinary center, which left the clear impression that CAB certainly knows how to practice what it preaches.

The National Angus Tour concluded with a tour of cattle and operations at Claylick Run Farms, as well as a presentation by Select Sires, leaving the visitors inspired and ready for the 2018 Angus Convention, which opened the following morning.